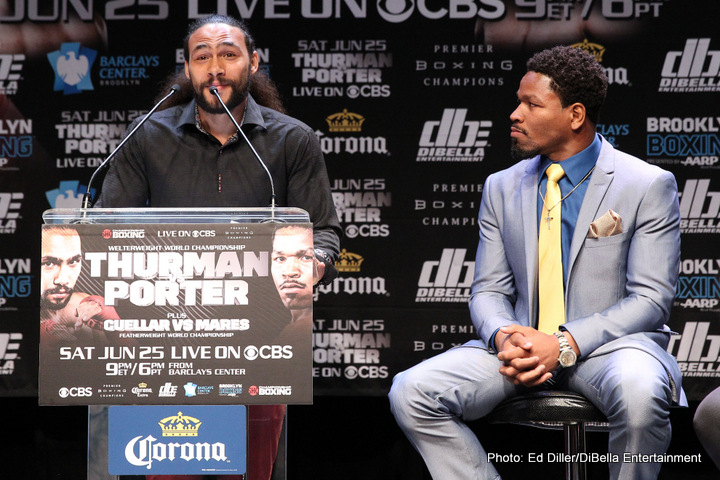 Tickets for the live event, which is promoted by DiBella Entertainment, start at $49 and are on sale now. Tickets can be purchased online by visiting www.ticketmaster.com, www.barclayscenter.com or by calling 1-800-745-3000. Tickets are also available at the American Express Box Office at Barclays Center. Group discounts are available by calling 844-BKLYN-GP.

Born and raised in the area, Thurman worked out at St. Pete Boxing Club along with longtime trainer Dan Birmingham as he prepared for his primetime battle against the strong and dangerous Porter.

Here is what the participants had to say Wednesday:

“Muhammad Ali opened up the door for so many people. Michael Jordan changed the game in our era, but Ali did it so long ago. He showed people that boxing is a great sport and can be the most entertaining sport in the world.

“For me, it’s almost like a dream come true. It’s surreal. I remember at an early age in boxing saying, ‘I want to be the guy that brings boxing back.’ I’m really blessed to be where I am in my career. For all the fighters who could end up on this stage, I’m proud that I’ve been chosen.

“I’ve always considered myself a knockout artist. Back to when I was a teenager knocking out grown men in headgear. Ever since then, I’ve been dropping people like a bad habit.

“I love being a power-puncher. My favorite fighter of all time is Mike Tyson. One of my goals that I set when I was a kid was to have more knockouts than Mike Tyson throughout my career.

“I’m ready for Shawn Porter. We’re going to box harder, box stronger and box better. I will be the better man.

“Training is the fundamentals of getting one prepared. We’ve always known that Shawn Porter was going to come into this fight in tremendous shape. That’s what his training methods are all about. But the Energizer Bunny has never been hit by Keith Thurman, and I’m pretty sure I could stop it in its tracks.

“I want to be the undisputed welterweight champion of the world. That’s my ultimate goal. There have only been so many in the history of boxing. I want to be a part of that history.”

“Keith is a guy who deserves to be on this stage. He has a lot of experience and he’s come into his own. This is the kind of thing that happens when you work hard.

“Life happens. Keith was involved in the accident and so we took the necessary rest. He saw the right doctors and we’re back now. We’re ready for Shawn Porter.

“We’re constantly conditioning. We’re working on attacking his style. He’s a short, come-forward brawler who’s going to try to come into Keith’s chest and make it a war. We’re making out adjustments.

“Keith has to be busier, more in charge fighter. He has to work off of his jab and then his power will keep Porter at bay.”