Training video of Anthony Joshua and U.S coach Anthony ‘Chill’ Wilson was posted earlier on Monday of their workout in Dubai.

The former IBF/WBA/WBO heavyweight champion Joshua (24-2, 22 KOs) is hard at work getting ready for a second fight with Oleksandr Usyk, who has all three of his titles after beating him by a 12 round unanimous decision last September in London.

Many boxing fans believe Joshua is making a mistake by fighting Usyk again because he was dominated so thoroughly from start to finish. Joshua is being stubborn by choosing to force the rematch rather than stepping aside to allow Tyson Fury to face Usyk.

In the 12th, Usyk had Joshua hurt and could have easily taken him out if he didn’t follow his trainer’s instructions to only box, and luckily for him that didn’t come back to haunt him like it did Wladimir Klitschko.

It’s unknown whether ‘Chill’ Wilson is the replacement for Joshua’s current trainer Rob McCracken or if this is just a simple workout with the U.S coach. Whatever the case, Joshua looked good at hitting the pads and putting a strong emphasis on throwing body shots. 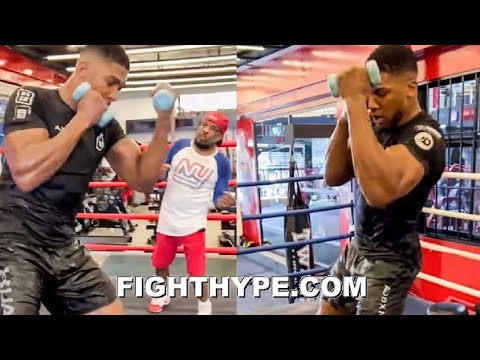 Joshua has visited four trainers in looking for a potential replacement for Rob McCracken.

If Joshua is going to change trainers, he’s going to need to make that move soon if he wants to gain any benefit from the new coach in time for his rematch with Usyk next April.

Even with a new trainer, Joshua’s weak chin and poor stamina will continue to cause him problems. It doesn’t matter who trains Joshua, he’s always going to have punch resistance and stamina problems.

If Joshua is going to throw body shots, he’s going to need a good chin this time because Usyk will counter him easily. To be a good body puncher, you need a chin, and Joshua is lacking in that area.

That’s the part of Joshua’s game that he left out in his loss to Usyk (19-0, 13 KOs) on September 25th at the Tottenham Hotspurs Stadium in North London.

When Joshua did throw to the body, he was getting a strong reaction from Usyk. It’s likely that Joshua will be throwing a lot of body shots in the rematch in hopes of wearing down the unbeaten champion.

Joshua has already triggered the rematch clause for the Usyk fight, and now the match needs to be negotiated by his promoter Eddie Hearn and Oleksandr’s promoter Alex Krassyuk.

According to Hearn, the negotiations will begin soon. Hearn expects the Joshua vs. Usyk II rematch to take place in the UK next April.

The way Joshua is sounding stubborn and intractable, he’s not likely to agree to a step aside deal, even if it means saving what’s left of his career.

Joshua has already been knocked out by Andy Ruiz Jr. in 2019, and he can close to being stopped by Wladimir Klitschko in 2017.

Klitschko probably would have knocked out Joshua in that fight if he hadn’t got the crazy idea to let him off the hook when he was hurt and gassed out from the sixth to the tenth.

Despite having tons of experience, Wladimir fought like he had no sense in that fight, allowing Joshua to survive.