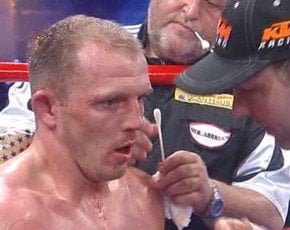 Brahmer is pretty lucky that the WBA did this, because the 35-year-old would have had zero luck in trying to beat any of the other champions to capture a belt. I can just imagine how well Brahmer would do against the likes of WBC champion Adonis Stevenson or WBO champion Sergey Kovalev. It wouldn’t be a pretty sight what these champions would have done to Brahmer.

IBF champion Bernard Hopkins would also have been much too talented for Brahmer to beat. But with the WBA opening up one of their two light heavyweight titles, it gave Brahmer a chance to squeeze in and stay relevant by beating the previously undefeated Marcus Oliveira to win the vacant WBA regular light heavyweight title last December.

Brahmer last fought what you could call a good opponent way back in 2008 when he lost to Hugo Hernan Garay. Since that time, Brahmer has fought 11 times, an the best guy he’s fought in all those years was Eduard Gutknecht. As you can see, Brahmer has been taking it real easy in terms of facing quality opposition. That’s probably a good thing for Brahmer, because had he fought Stevenson, Kovalev, or Hopkins during those years, he’d likely have lost badly.

The 33-year-old Maccarinelli is someone that is hard to really judge, because he’s got excellent power, but his chin is fragile. When he’s able to land his shots, he has the chance of beating almost anyone in the light heavyweight division. But his ability to take hard head shots leaves him vulnerable against the top fighters at 175. However, Maccarinelli has looked a lot better lately ever since he moved up to the light heavyweight division in 2012. He’s won 4 out of his 5 fights at this weight recently, and the only loss he had was a controversial 2nd round stoppage against Ovill McKenzie in 2012. Maccarinelli beat McKenzie in their rematch, so that loss has kind of been erased with that win.