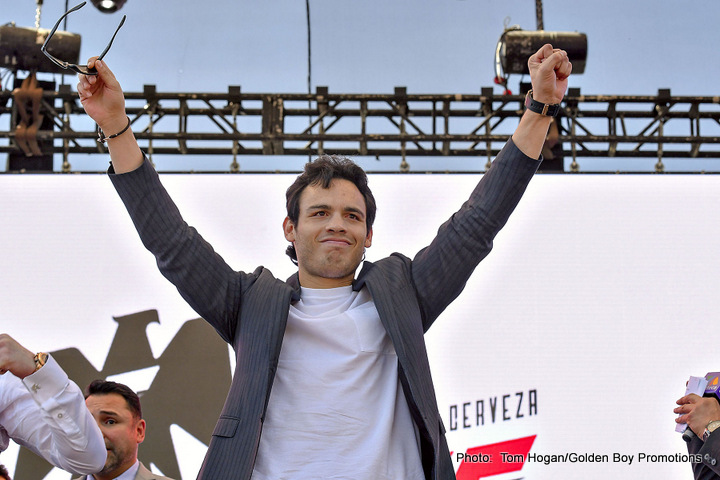 Last seen putting in a quite dire effort against countryman Canelo Alvarez in May in a big fight that disappointed all concerned, Julio Cesar Chavez Junior has tweeted how he is set to return to the ring on November 11. The former WBC middleweight champ left the ring to the sound of boos after his lopsided, he-failed-to-turn-up decision loss to Canelo, and he now aims to get fight fans back on his side with a win over former 168 pound champ Anthony Dirrell.

The fight, Chavez Jr. says, will take place at The Forum in Inglewood, California. The fight will be fought at the full 168 pound limit. So, how much has Chavez got left to offer? Do fans even care at this late stage in his once very promising career? At least Chavez, 50-3-1(32) has chosen a good, solid, perhaps even very dangerous opponent to get it on with in his latest comeback.

Dirrell, 30-1-1(24) and a year older than Chavez at age 32, briefly held the WBC super-middleweight title, holding it from August of 2014 until April of the following year. Dirrell beat the tough Sakio Bika to win the belt but was then decisioned by Badou Jack in his first defence. Since the Jack defeat, a majority verdict, Dirrell has won three on the spin against good fighters.

Never having been stopped and having shown more ambition than Chavez has recently displayed, Dirrell could well become the man to end the Mexican Son of a Legend’s career; at least at anything approaching top level. Or has Chavez had one good hard look at himself after the humbling loss to Canelo and is he ready, again, to give it one more shot?

Chavez may well be all out of chances in the opinion of many fight fans, but if he can pick up a win over Dirrell he will continue on with his career for at least a little while longer. As to whether Chavez can ever possibly reign as a a word champion again, that’s a different story altogether.