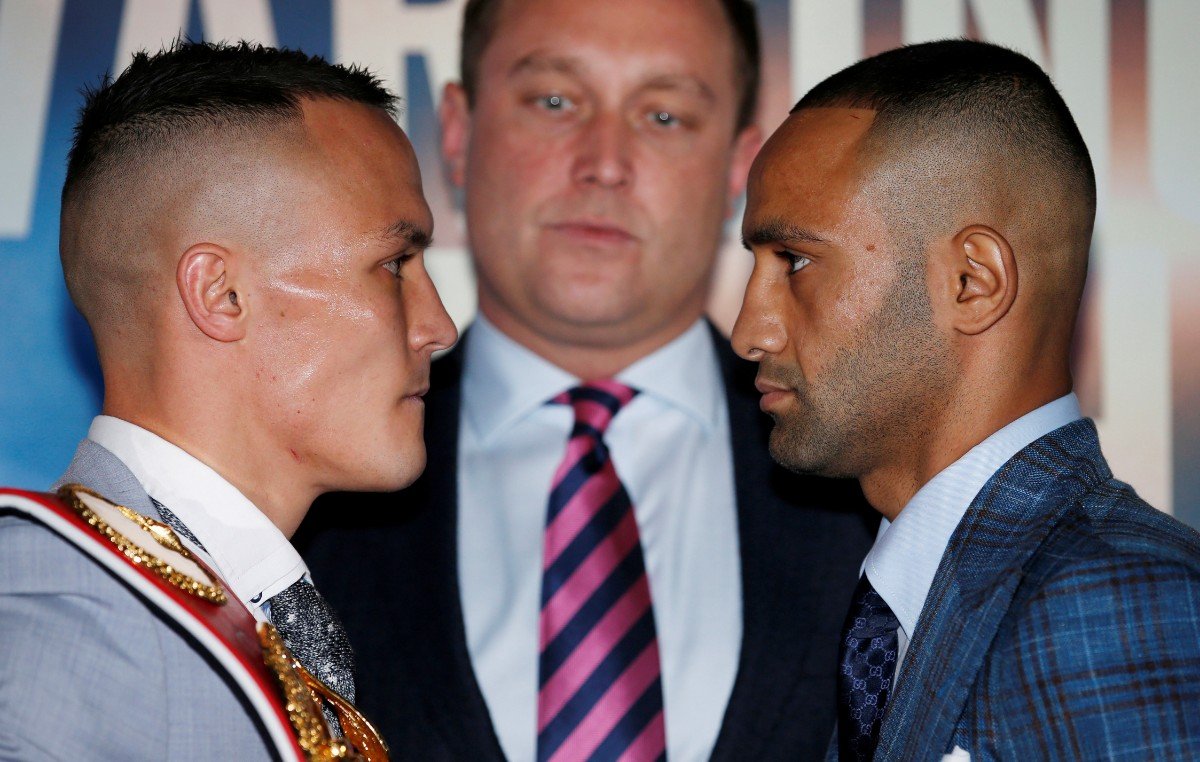 The talk has now been talked ahead of Saturday night’s IBF world featherweight title clash between the champion Josh Warrington and his mandatory challenger Kid Galahad at the FD Arena, live on BT Sport.

The final press conference took place earlier today and below are selected quotes from the media gathering in Leeds.

“The fight against Lee Selby was voted IBF Fight of the Year and I fully expect the Carl Frampton one to be named the same at the next convention, and rightly so.

Saturday’s fight will be another cracker because Josh isn’t in boring fights. Josh brings it with non-stop pressure and, with the best fans in the world behind him, it makes it a very intimidating place to come.

The fight at Elland Road was unbelievable and one of my favorite nights in boxing. It will go down as one of the special ones in British boxing history.

People say Ricky Hatton united a city, but Leeds is already behind Josh and is a city united.”

“The atmosphere is not really a factor when you have been in this situation before and I have been involved in maybe 60 or 70 world title fights. Josh and his dad have been in about two or three, so it is down to experience.

But what you have done in the past is not going to be a reflection of what you do in the future and I think a good example of that is Anthony Joshua the other weekend.

Kid Galahad is a different proposition. Everybody backed those two against Josh and everybody considered them to be the better fighter, but Josh Warrington came through. That is where we are now, everybody thinks Josh Warrington is going to win this fight because he is the champion and the better fighter. But he has been in the same position in his last two fights and look what happened. That is what is going to happen to Kid Galahad.

That is what Josh Warrington is going to get on Saturday night. Kid Galahad has got that hunger, it is not about money, it is about winning the fights and he is not going to be happy until he has had six or seven defences of his title.”

“I was alright until he started going on about hunger – and now I am hungry! I’ve had nowt since 7am this morning.

I think we have put 20 years of work in and he is making it sound like we are going to turn it all in on Saturday and give it all up.

He knows that’s not the case. The fact Josh as bought a house doesn’t mean we are going to turn up and think it is our god-given right – Dominic knows that. He keeps going on about him having nothing, but I don’t remember us having a corner shop when we was kids, so he was off to a good start there, to be fair.

We’ve always fought and worked hard for everything and I can assure you we are not about to give that up on Saturday night. Everybody goes on about underdogs and who is favorite or not. I don’t think that comes into it, you turn up on night and do what you do.

There has been no complacency whatsoever in this camp and we have done what we do in every camp.

Barry is a good fighter and he is here on merit as mandatory, so we prepare for him like we have done for everybody else. Perhaps more because we do want to beat him a bit more than everybody else.”

“I’m feeling good, training has gone well and all the talking is done. Just a few more sleeps and that belt is coming back to Sheffield. I just know, it is destiny and I have been dreaming about this all my life.

I have always known I would fight Josh as a professional and I just can’t wait now.

The last thing Brendan Ingle gave me was a tee-shirt from when Naz fought Boom Boom Johnson for the IBF title. It is destiny. I was very close to Brendan and I spent most of my time with him. If it wasn’t for him I would probably be locked up or dead. When I do win he will be watching me. When that title is around my waist he will be smiling up above.

I don’t really fear much about Josh. He is a good fighter but I believe I have sparred better fighters than him in the past like Linares, Ricky Burns, Kell Brook – the list goes on. They keep going on about him beating Lee Selby and Carl Frampton, but I have sparred better kids than he has boxed.

Sparring is actually harder than the fight in my opinion.”

“The support has been fantastic as always. We’re here and I can’t wait to go at the end of a long camp. I am hungry and I can’t wait for Saturday. It has been a busy few weeks listening to Barry and his team, but let’s get one thing clear. The hunger has not died one little bit.

Because my lifestyle has changed over the last year or so does not mean I am about to roll over and let me title go away. It is my title by merit, I won it fair and square and no-one is coming to Leeds and taking it off me.

I’ve set myself little goals about unifying the division and I am not looking at Barry as someone who is getting under my skin anymore. I am just looking at him as an opponent, I’ve got to get through him then we go Stateside for big world title fights.

For Dom to say I have lost my hunger… He doesn’t know owt about me and it is stupid for him to assume the hunger and desire is not there. In this camp I have given my all.

For Barry to say sparring is harder than fights is a load of b*llocks.

He can keep talking about it being his destiny and it sounds like he is saying the same things as me in my press conference against Lee Selby. It is not Barry’s time. The title will be staying here.”