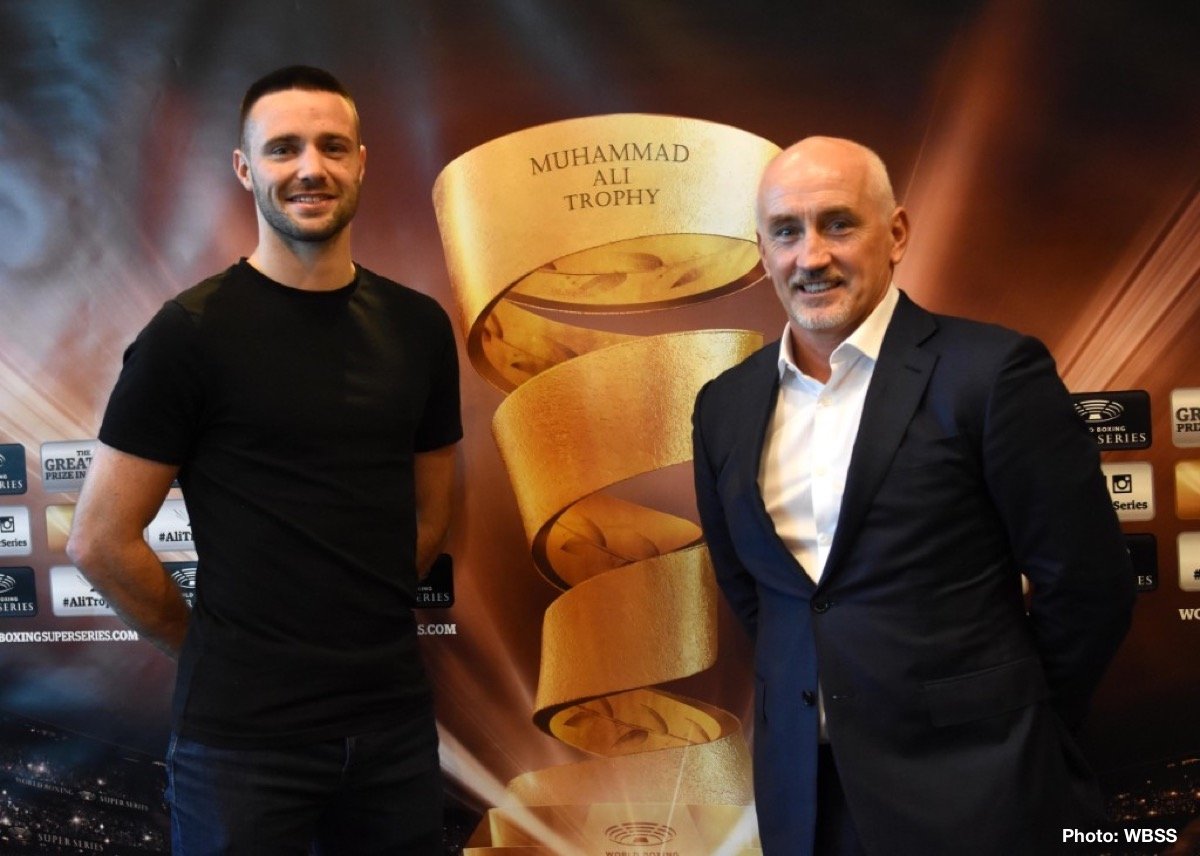 Barry McGuigan is backing Josh Taylor to overcome all opposition to lift Muhammad Ali Trophy as his protégé prepares for his Quarter-Final clash with undefeated American Ryan Martin on November 3 at The SSE Hydro in Glasgow.

McGuigan, the former WBA Featherweight Champion, has heaped praise on the World Boxing Super Series concept, and while recognising the depth of talent in the tournament’s Super Lightweight bracket, he believes Taylor is the best 140lb.

“The World Boxing Super Series a great concept because it circumvents all the politics of the sport because everybody wants to fight for the Ali Trophy,” said the International Boxing Hall of Fame inductee. “It’s a great opportunity. A unique concept and we were thrilled to have the chance to put Josh into it.

“It’s a tough tournament but that’s what you expect. They’re all very good kids. Every one of them. Ryan Martin is a very good kid. Baranchky is exceptional. Regis Prograis is considered one of the favourites, and Terry Flanagan is no slouch. It’s a great tournament, but I think I have the best 140lber.

“We’re not taking Ryan Martin for granted. He’s a very tough fight, a very good kid but I think Taylor beats him on any given day. He’s traveled the world as an amateur. He’s boxed on foreign soil. He’s boxed everywhere. It doesn’t worry him. It doesn’t faze him. He’s got the most adaptable style. He’s matured a lot. He’s 27 years old. He’s much more settled. I think for this camp he’s in the best condition he’s ever been. He’s ready and we still have two weeks to go.”

Taylor begins his quest for The Ali Trophy in familiar territory as he returns to the Glasgow arena where he claimed Commonwealth gold as an amateur in 2014 and this year recorded impressive back-to-back wins over Nicaraguan danger man Winston Campos and former World Champion Viktor Postol.

“I feel that The SSE Hydro is definitely my home arena and my home in boxing,” said the 27-year-old. “I’ve had such great success there since the Commonwealth Games in 2014, and also my two biggest victories as a professional. I don’t think there is anyone who is going to beat me in front of the fans in the Hydro. The atmosphere, the noise they make and the support they give. They throw every punch with me. There is no way anybody is going to beat me at The SSE Hydro.”

With three weeks to go, the Scottish boxer, who holds the WBC Silver Super Lightweight strap, is eager to get underway as he looks to establish himself as the number one 140lber by lifting the coveted Muhammad Ali Trophy.

“I am so excited for this tournament to start,” he says. “It is such a massive opportunity for me not just in terms of my boxing but also building my profile all around the world. It’s a global tournament so after this quarter-final, which I believe I will win, the semi-final could be anywhere. I am really looking forward to being involved and fighting all over the world in the name of the great Muhammad Ali. I promise I won’t let any of my fans down”

Taylor’s first test will see him squares-off against the highly rated Ohio resident Martin. With an extensive amateur background and undefeated in his 22 professional contests, Taylor is aware of the threat the American poses.

“I’ve studied enough of him to know what I need to watch for,” said Taylor. “I know he is a very well rounded fighter. He’s got fast hands, he’s good defensively, he’s got a good variety of punches and he knows his way around the ring. He’s obviously got power as well although his record doesn’t suggest it with only 12 stoppages from 22 wins, I know he is going to be able to punch and he’s going to be strong so I’ve got my hands full but I’m fully confident I’m going to come out on top.”

If successful, Taylor will meet the winner Ivan Baranchyk and Anthony Yigit, who contest the IBF World title on October 27 in New Orleans in another of the Super Lightweight bracket’s hotly anticipated quarter-finals. The Edinburgh-boxer gives Baranchyk the edge but says he is confident of overcoming either of his potential semi-final opponents.

“I don’t care who wins,” says Taylor. “I think Baranchyk will probably get through that, but I’m confident of beating him. If Yigit wins, I know I will win that fight as well. I’ve got experience with him in the ring as a professional and I’ve had experience with him as an amateur so I know I’m comfortable in winning that fight as well so I’m not really bothered who I face.”

“In fact, I’m not really fussed about any of the opposition in the tournament. I think I can beat every single one of them. That being said they’re all very good fighters. They’ve all had good amateur careers and they’re all stiff competition, but I’m fully confident I’m going to come away with that trophy.”

Tickets from £35 (plus fees) are available at: thessehydro.com