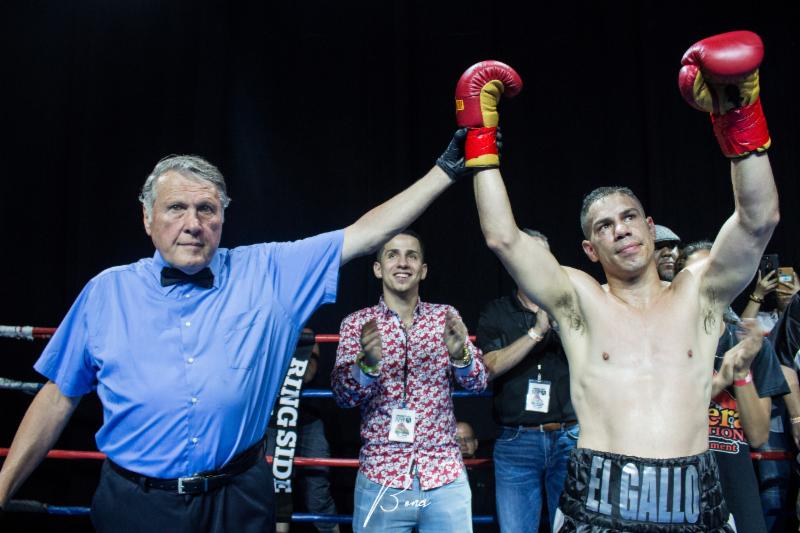 Former three-time, two-division world champion, “El Gallo” Jose Antonio Rivera made a successful return to boxing after being away from the sport for seven-years with a dominating seventh-round technical knockout victory over battled-tested veteran, Larry “Slomoshun” Smith.

“I have always been tough, but I was a little rusty. He tested me early, but once he saw that I was not going anywhere, he knew he was in for a fight,” said Rivera after the bout. “I started warming up in the fourth-round. I was always a twelve-round fighter. I felt great. We gave a good fight to the fans that have always supported me.”

He dominated this one-sided middleweight bout until referee, Bob Benoit stopped the bout at one minute and four seconds when Smith took a knee in his corner and said that he did not want to continue. It was revealed after the fight that Smith sustained a broken right hand in the fifth-round after he connected on a punch to Rivera’s head.

Rivera outworked and out landed Smith. He also connected on the more powerful punches. Rivera took over the fight from the fourth-round on as his ring rust wore off and he fought much more aggressively. He was extremely effective at connecting to Smith’s midsection which caused his offensive output to drastically decrease in the second-half of the fight. Rivera came close to knocking down Smith on several occasions in the sixth-round. Smith demonstrated a great deal of heart by hanging in there despite taking an enormous amount of punishment.

At the time of the stoppage, Rivera was ahead 6-0 on all three scorecards. He improved to 42-6-1, 25 KOs. Rivera has won four in row dating back to 2008. Smith, who was a late replacement to fight Rivera after his previous opponent, Ruben Galvan dropped out the week of the fight with a broken finger, dropped to 10-38-1, 7 KOs.

“I give myself a C+ tonight,” said Rivera. “I am going to talk with my family, but I am thinking about one more fight [in November], to make it 50 for my pro career.”

The fight card “Homecoming” was promoted by Granite Chin Promotions (co-owned by Chuck Shearns and professional fighter, Chris Traietti (26-4, 21 KOs)), in association with Rivera Promotions Entertainment (co-owned by Jose and his son, AJ, who was supposed to fight on this card, but did not get medically cleared to). It took place at The Palladium in Worcester, Massachusetts.

In the co-feature, Kendrick Ball Jr. scored a dominating first-round technical knockout win over Fabian “El Lobo” Valdez. Referee Steve Clark stopped the super middleweight bout at two minutes and twenty-one seconds after the second knockdown which came from a right uppercut. Ball Jr. upped his record to 10-1-2, 7 KOs. He bounced back from his first professional loss that he sustained two months ago to previously unbeaten Alexis Gayton. Valdez fell to 2-4. Ball Jr.’s first knockdown came from a right hook to the body. Valdez remained on the canvas for several minutes after the last knockdown after which he walked off on his own power.

Junior middleweight Khiary Gray got back into the win column with a crushing first-round technical knockout victory from a left-right hook combination that dropped Antonio Chaves Fernandez. Referee Benoit stopped the bout at two minutes and twenty-seven seconds, however, the stoppage appeared a bit premature considering that Fernadez did not seemed hurt and easily beat the ten-count. Gray also knocked out Fernandez in similar fashion in the first-round in 2015. Gray improved to 16-4, 12 KOs. Fernandez dropped to 9-34, 4 KOs.

Wilfredo “El Sucaro” Pagan kept his undefeated record intact as he scored a dominating third-round technical knockout win over Engelberto “Guarura” Valenzuela. Referee, Clark stopped the one-sided junior middleweight bout at one minute and twenty-nine seconds after Pagan dropped Valenzuela for the third time from a left uppercut. Pagan improved to 5-0, 3 KOs. Valenzuela fell to 11-15, 3 KOs. Pagan knockdown Valenzuela twice in the second-round from right hooks to the body.

Joshua Orta (1-0) defeated Edwin Rosado in his junior lightweight professional debut via a technical knockout victory in a good, back-and-forth fight, however, Orta landed the much more powerful punches that took a significant toll on Rosado and forced his corner to stop the bout at the end of the third. Rosado sustained a large cut over his right eye from an accidental head butt that bleed throughout the first-round, however, his corner stopped it from bleeding for the rest of the fight. Rosada, who fought for the first time in seven-years, dropped to 1-8-1, 1 KO.

Welterweight Eslih Owusu (1-0) made a successful professional debut as he defeated Bryan “The Brick” Abraham via a fourth-round unanimous decision. Abraham dropped to 6-31-2, 6 KOs. Owusu controlled the action. He landed what he wanted and connected on the harder shots. Owusu scored two quick back-to-back knockdowns from right hooks in the third, although the first knockdown appeared to be a slip.

Jose Angel “KO” Ortiz scored a dominating second-round technical knockout victory over Patrick Leal as referee, Benoit stopped the middleweight bout at one minute and three seconds after Leal was dropped for the third time from a left hook to the body. Ortiz scored two knockdowns in the first-round from left hooks to the head. Ortiz improved to 5-13-1, 2 KOs and won for the first time in seven-years. Leal dropped to 0-5.