Heavyweight Joe ‘Juggernaut’ Joyce is hoping to get a big fight against Tyson Fury, Anthony Joshua, or Dillian Whyte once he gets through his stay-busy match against journeyman Christian Hammer this Saturday night on July 2nd at The SSE Arena, in London, England. The fight will be shown on ESPN+, 2:30 p.m. ET

The recently beaten Whyte would obviously be the least desired fight of the three, but if that’s as good as it gets for the #1 WBO & #2 WBC ranked Joyce (13-0, 12 KOs), he’s not going to turn it down.

There’s arguably a small chance that ‘The Juggernaut’ Joyce could wind up fighting former WBO heavyweight champion Joseph Parker would be a long shot, given that the two compete on different networks.

Whatever chance there was of the Joyce-Parker fight getting made, that bird has flown with Parker inking with a different network.

Oh well, it’s not the end of the world because Joyce will get a title shot soon without the need of fighting the 30-year-old Parker, so it doesn’t matter that this fight won’t happen.

WBC heavyweight champion Tyson Fury has his eyes set on fighting the winner of the rematch between unified champion Oleksander Usyk and Anthony Joshua in their match on August 20th in Jeddah, Saudi Arabia.

Considering Fury’s high purse demands to draw him out of retirement, it’s safe to say he’s not going to accept a fight with the big 6’6″ Joe Joyce because that’s hard work, and ‘The Gypsy King’ seemingly has lost his ambition unless he’s getting a boatload of dough.

Minus Fury, Joyce has an excellent chance of getting the winner of the Joshua vs. Usyk II rematch. Whether Joyce gets that fight will be determined by Fury.

If Fury wants the winner, he can have it, but he prices himself out with his wacky $500 million demands, and if Usyk wins the rematch with AJ, there might not be any interest in that hard work from ‘The Gypsy King.’

That’s how it goes with people sometimes. When they make a ton of dough, their desire for hard work goes out the window, and they just want to sit around, eat, watch TV and enjoy a life of leisure while growing fat.

Joyce can’t afford any slip-ups against the 34-year-old Hammer on Saturday because a loss would ruin his high ranking with the WBC and WBO.

It would be better for Joyce if Fury stays retired because then he’d be the guy looking to fight for the titles against the Joshua vs. Usyk 2 rematch winner. With Fury, it’s impossible to know what he’ll do next because he seems like he’s trolling every time he gives an interview.

The fact that Fury hasn’t vacated his WBC title and is exercising on a daily basis suggests that the’s training to take on the winner of the Joshua-Usyk 2 fight.

“Tyson hasn’t given up his belt yet. If his WBC belt is given up, I would be first in line to fight for it, probably against Deontay Wilder,” Joyce said to ESPN.

“Tyson is enjoying some family time now, but I think he is waiting to see the outcome of Usyk-Joshua. He’s won and done everything in the sport, but if £500 million is on the table, I’m sure he will fight again.

“If the winner of Usyk-Joshua doesn’t want to fight me, they will have to give up the WBO belt and I will get to fight for it.” 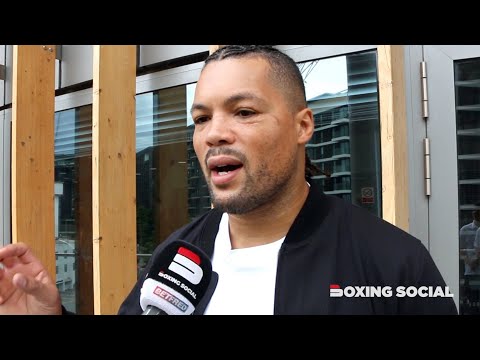