One of the best lower weight fighters in the world today, Jerwin Ancajas is also operating in a most talent-rich weight division: super-flyweight. The Filipino is not as big a name as warriors Roman “Chocolatito” Gonzalez, Juan Francisco Estrada, Srisaket sor Rungvisai and Kazuto Ioka, yet it could just be that the 29 year old “Pretty Boy” beats them all if he gets the chance to fight them. Maybe.

Last night, fans were treated to an excellent fight, as Ancajas met his IBF 115 pound mandatory challenger, Johnathan Rodriguez, in Connecticut. The southpaw from Panabo City had to dig deep to get past the determined Mexican who has never been stopped. Ancajas won a hard-fought 12 round decision, by scores of 117-110, 116-111 and 115-112. Ancajas is now 33-1-2(22). Rodriguez falls to 22-2(16). 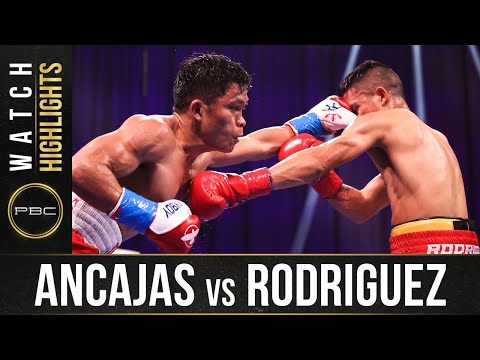 The 12 rounds were at times thrilling, at times technical and at times gruelling, for both men. Anajas, making the ninth defence of the belt he has held since September of 2016, ended up swollen around the eye and he had to withstand a late surge from his 25 year old challenger.

Ancajas scored a knockdown late in the fight, in round eight, when a body shot hurt the Mexican and a follow-up barrage sent him down on one knee, this the first knockdown of Rodriguez’ pro career. It was, however, the challenger who finished the fight strong, winning the last three rounds. After the fight, Ancajas admitted this had been “the toughest defence for me.”

“This was very hard for me,” the champion said.

Rodriguez, who felt the decision should have been closer, perhaps a split decision, is proud of the performance he gave and he feels more big opportunites will come his way in the future. In all honesty, a rematch would not be a bad idea. But Ancajas wants, and deserves, the big fights, the big paydays. Before last night’s fight, Ancajas was calling for a big fight with Roman Gonzalez. Who knows if he will get it.

The 115 pound division is crammed full of superb little giants and as such there are a number of grat match-ups that could be made. Ancajas is the IBF champ, Juan Francisco Estrada is the WBA/WBC ruler, while Kazuto Ioka holds the WBO title. But who is the best? Ancajas wants the chance to prove that he is.