Boxing 247 will be giving updates & results of tonight’s Charlo vs. Castano 2 card below. 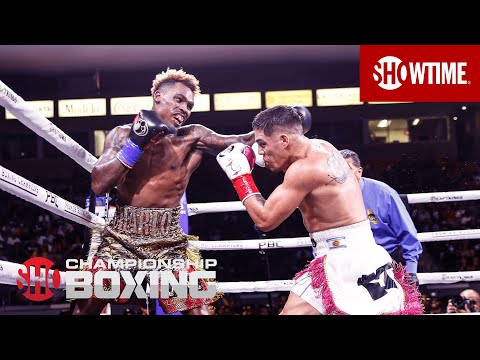 Charlo realizes that he must throw more punches and stay off the ropes because he ruined his chances of winning last July by failing to let his hands go and letting Castano tee off on him against the ropes.

Jermell couldn’t stay in the center of the ring due to the constant pressure from Castano, which really bothered him. Charlo lacks the gas tank to fight for a full three minutes. Hence, he needed to take frequent breaks against the ropes ala Canelo Alvarez

“I love the rematch. The first fight was great,” said Shawn Porter to Fight Hub TV on the Jermell Charlo vs. Brian Castano II rematch. “We all think Charlo is going to make some adjustments and win the fight.

“Charlo looks very comfortable, and how I feel, a happy higher is a dangerous fighter,” said Porter. “He [Charlo] hurt him twice in the fight, and once he sees it, he’s going to go for it in a vintage Charlo move there.

“I think Charlo makes adjustments, fights a little different, and wins this one. It’s hard not to be supportive of Castano with his size and his abilities. The possibilities are out there.

“When I think about that, I think he’s going to pull this off again. The style is a tough one for Jermell. If you’re Castano, you don’t change anything.

“Maybe you push the gas pedal a little bit more at certain points in the fight, but you don’t be flat-footed, and you don’t run around. You fight with the same tempo and rhythm that you fought with before and win the fight.

“60 or 70%,” said Porter when asked how likely it is that Castano can win. “There’s going to be some fire in the corner of Charlo now. If he fights the way he did last fight or if he’s content to sit back and wait to find his timing, he’ll never find it.

“Charlo has to be aggressive. I’m not telling you to fight like me, but you have to be in that face.

“You have to be using a good jab, a good double jab, and stepping towards your guy, making him feel your presence. I don’t think Charlo did that in the first fight.

“I had Charlo losing the fight, but I thought a draw was fair. I think Charlo will win the rematch, but Charlo has to step up; he has to be aggressive not only from the standpoint of throwing punches but also being active and making Castano feel his presence.