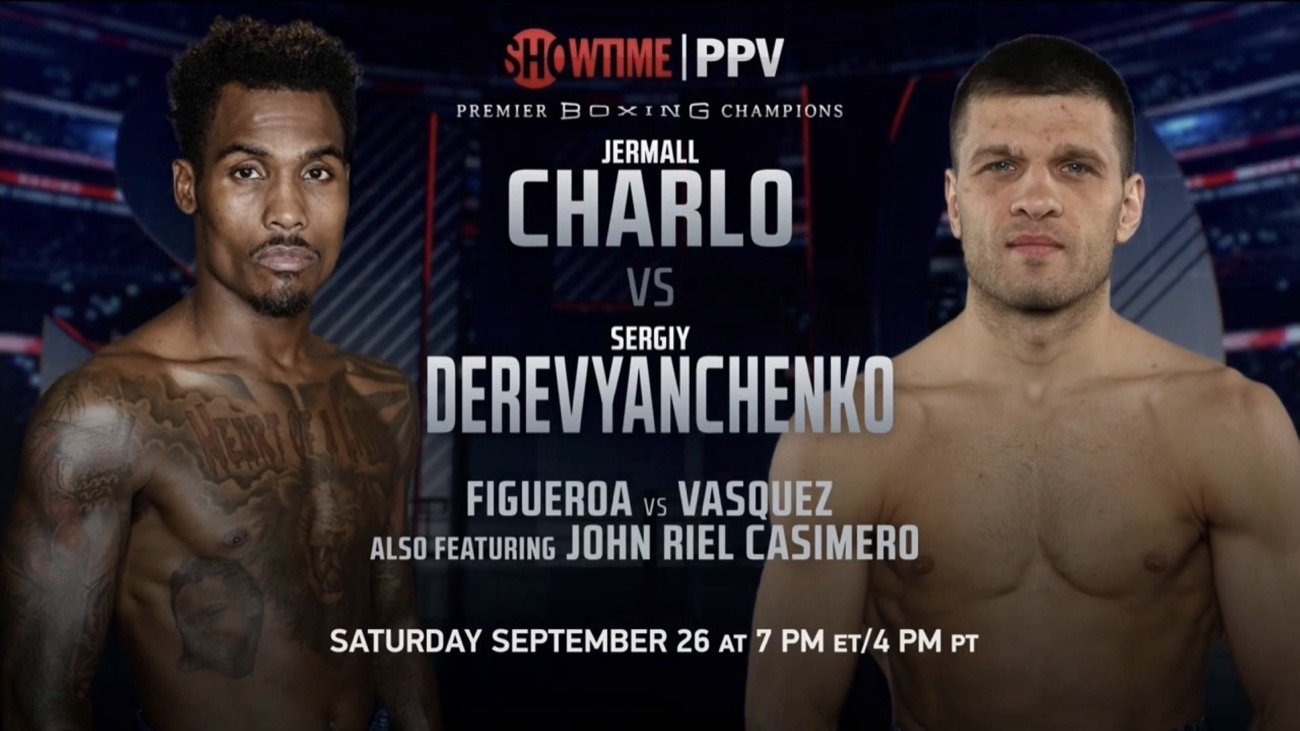 The unprecedented pay-per-view twin bill features six compelling fights in all, five of which are world title fights, on the same night for one price. Part one of the SHOWTIME PPV telecast begins live at a special time of 7 p.m. ET/4 p.m. PT with the Charlo vs. Derevyanchenko three-fight card. WBA Super Bantamweight Champion Brandon Figueroa will defend his title against 122-pound contender Damien Vázquez in the co-featured bout, while WBO Bantamweight World Champion John Riel Casimero faces off against unbeaten Duke Micah in the pay-per-view opener.

Following the main event of part one and a 30-minute intermission, the second three-fight card headlined by WBC Super Welterweight World Champion and twin brother Jermell Charlo facing arguably the toughest test of his career in unified 154-pound World Champion Jeison Rosario will begin. The event is presented by Premier Boxing Champions and promoted by Lions Only Promotions and TGB Promotions as part of a blockbuster pay-per-view event.

Houston’s Jermall Charlo (30-0, 22 KOs) has held the WBC middleweight title since 2019 and reigned as the IBF 154-pound champion from 2015 to ‘17. The 30-year-old holds wins at 154 pounds against championship-level fighters including Julian Williams, Cornelius Bundrage and Austin Trout. While campaigning at middleweight, Charlo is 5-0 with three knockouts, including victories in 2019 over Brandon Adams and, most recently, Dennis Hogan in December.

Derevyanchenko (13-2, 10 KOs) has twice challenged for the IBF middleweight title in 2018 and ‘19, losing only to top-level opponents Daniel Jacobs and Gennadiy Golovkin. He was an accomplished amateur and a 2008 Olympian for his native Ukraine before turning pro in 2014. The 34-year-old now trains out of Brooklyn and owns victories over Jack Culcay and Tureano Johnson that propelled him up the 160-pound rankings.

The four undercard matchups across the two shows feature some of the best talent in the 118- and 122-pound divisions, including two world champions (Figueroa and Casimero), a WBC No. 1 ranked contender (Nery) and two WBA No. 2 ranked fighters (Danny Roman and Juan Carlos Payano). In all, the eight undercard fighters boast a combined record of 190-11-3, including four men who have yet to taste defeat. With champions and contenders including newly-crowned WBO 122-pound titlist Angelo Leo and No. 1 contender Stephen Fulton waiting in the wings for future world title and unification fights, all four undercard bouts carry high stakes and world title implications.

The 23-year-old Figueroa (20-0-1, 15 KOs) looks to make his second successful title defense on September 26. A Weslaco, Texas native and younger brother of former world champion Omar Figueroa, he claimed the interim WBA 122-pound title with an eighth-round stoppage of Yonfrez Parejo last April, before successfully defending the title with a homecoming KO of Javier Chacon. After being upgraded to the “regular” titlist, Figueroa retained his belt after a 12-round draw against former champion Julio Ceja last November.

The 23-year-old southpaw Vázquez (15-1-1, 7 KOs) was born in Thornton, Colo. and now fights out of Las Vegas. The younger cousin of former two-time champion Israel Vázquez is coming off a stoppage win over Alejandro Moreno in February of 2020. Vázquez turned pro in 2013 and reeled off 14 consecutive wins to begin his career in the paid ranks.

The 31-year-old Casimero (29-4, 20 KOs) of the Philippines will make his first title defense after being previously scheduled to face Naoya Inoue in a bantamweight unification title fight in April before the COVID-19 shutdown. Casimero has been training in Las Vegas since March and won the title with an impressive third-round stoppage of Zolani Tete last November. The three-division champion had previously captured titles at flyweight and light flyweight.

Born in the boxing hotbed of Accra, Ghana, the undefeated Micah (24-0, 19 KOs) has fought his last four bouts in the United States, most recently scoring victories in 2019 over Luis Suarez Cruz in August and Janiel Rivera in December. The 28-year-old now trains out of Brooklyn, N.Y. and has fought professionally since 2012.