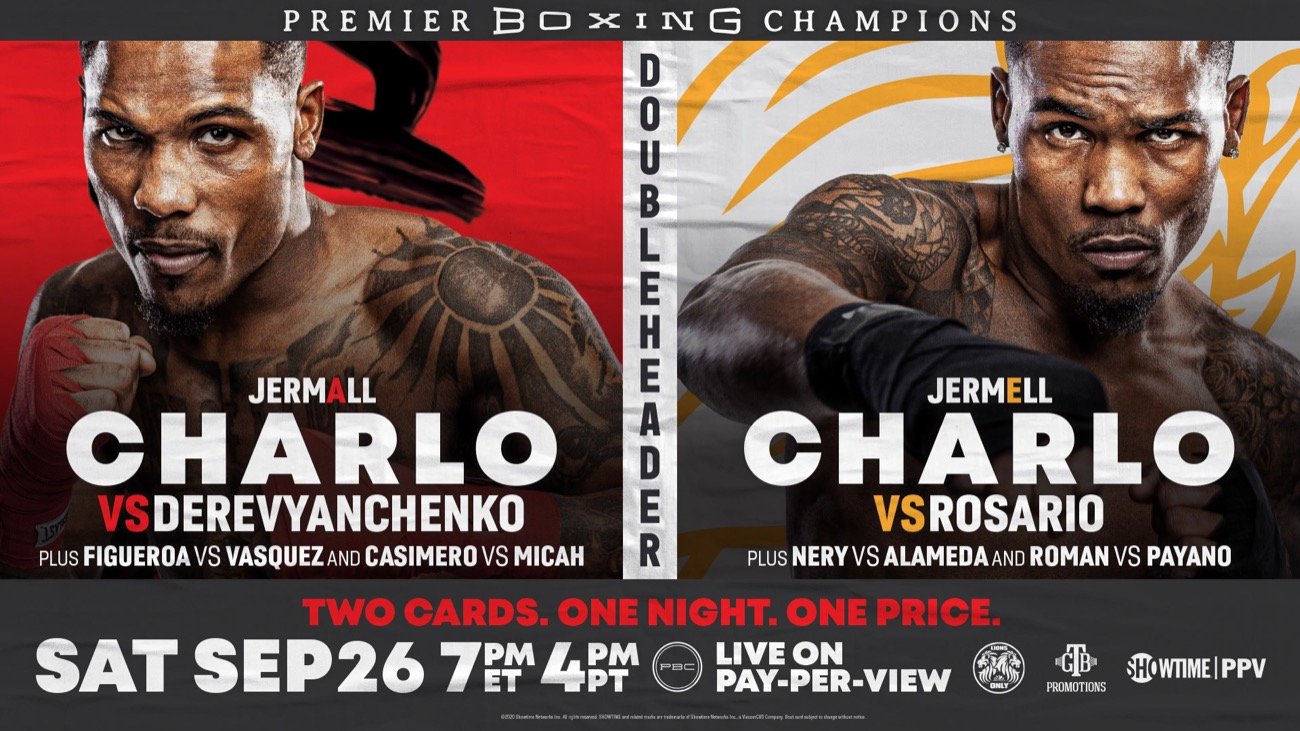 The unprecedented pay-per-view twin bill, in which both Charlo brothers face the toughest tests of their careers, features six compelling fights in all, five of which are world title fights, on the same night for one price. Part one of the SHOWTIME PPV telecast begins live at a special time of 7 p.m. ET/4 p.m. PT.

The 30-year-old Charlo regained his title by knocking out Tony Harrison last December and avenging his only career loss. Trained by Derrick James in Dallas, Charlo first captured the title in 2016 with a knockout victory over John Jackson on SHOWTIME. He went on to make three successful title defenses, scoring highlight reel knockouts over Erickson Lubin and Charles Hatley, in addition to a decision victory over Austin Trout in which he dropped the former champion twice.

Rosario captured the WBA and IBF belts at 154-pounds with an upset victory over Julian Williams in January, stopping him in the fifth round. Now training out of Miami, the 25-year-old rode an eight-fight unbeaten streak into the showdown with Williams, including victories over 154-pound contenders Jamontay Clark, Justin DeLoach, Jorge Cota and Marcos Hernandez. He has shown considerable power by either earning a stoppage victory or scoring a knockdown in seven of his last nine contests.

The four undercard matchups across the two shows feature some of the best talent in the 118- and 122-pound divisions, including two world champions (Brandon Figueroa and John Riel Casimero), a WBC No. 1 ranked contender (Nery) and two WBA No. 2 ranked fighters (Román and Payano). In all, the eight undercard fighters boast a combined record of 190-11-3, including four men who have yet to taste defeat. With champions and contenders including newly crowned WBO 122-pound titlist Angelo Leo and No. 1 contender Stephen Fulton waiting in the wings for future world title and unification fights, all four undercard bouts carry high stakes and world title implications.

Tijuana, Mexico’s Luis Nery (30-0, 24 KOs) will look to become a two-division champion after an impressive run at bantamweight. The 25-year-old rides a streak of 11 consecutive knockouts into this fight, including triumphs over former champions Juan Carlos Payano and McJoe Arroyo last year. He earned his bantamweight title by going to Japan and stopping Shinsuke Yamanaka in the fourth round of their 2017 duel.

The 27-year-old Aaron Alameda (25-0, 13 KOs) seeks his first championship in his second fight in the U.S. on September 26. The Sonora, Mexico native will be stepping into his first 12 round affair, having most recently knocked out Jordan Escobar in 2019 and Breilor Teran in the ninth round of their 2018 clash. A pro since 2014, his previous action in the U.S. saw him earn a sixth-round knockout over Andre Wilson in 2016.

A former unified super bantamweight champion, Román (26-3-1, 10 KOs) can step closer to another world title with a victory against Payano. Ranked in the top five by three of the four sanctioning bodies, Román previously held the WBA title from 2017 to 2019. The Los Angeles native unified titles by defeating then-unbeaten TJ Doheny last April, before losing a split decision to Murodjon Akhmadaliev in January of this year.

Born in the Dominican Republic and now fighting out of Miami, Fla., Payano (21-3, 9 KOs) captured a bantamweight crown in an exciting 2015 clash against Rau’shee Warren, before losing the title in their rematch. He has also challenged top fighters in Naoya Inoue and Luis Nery in addition to a triumph over then-unbeaten Damien Vazquez.