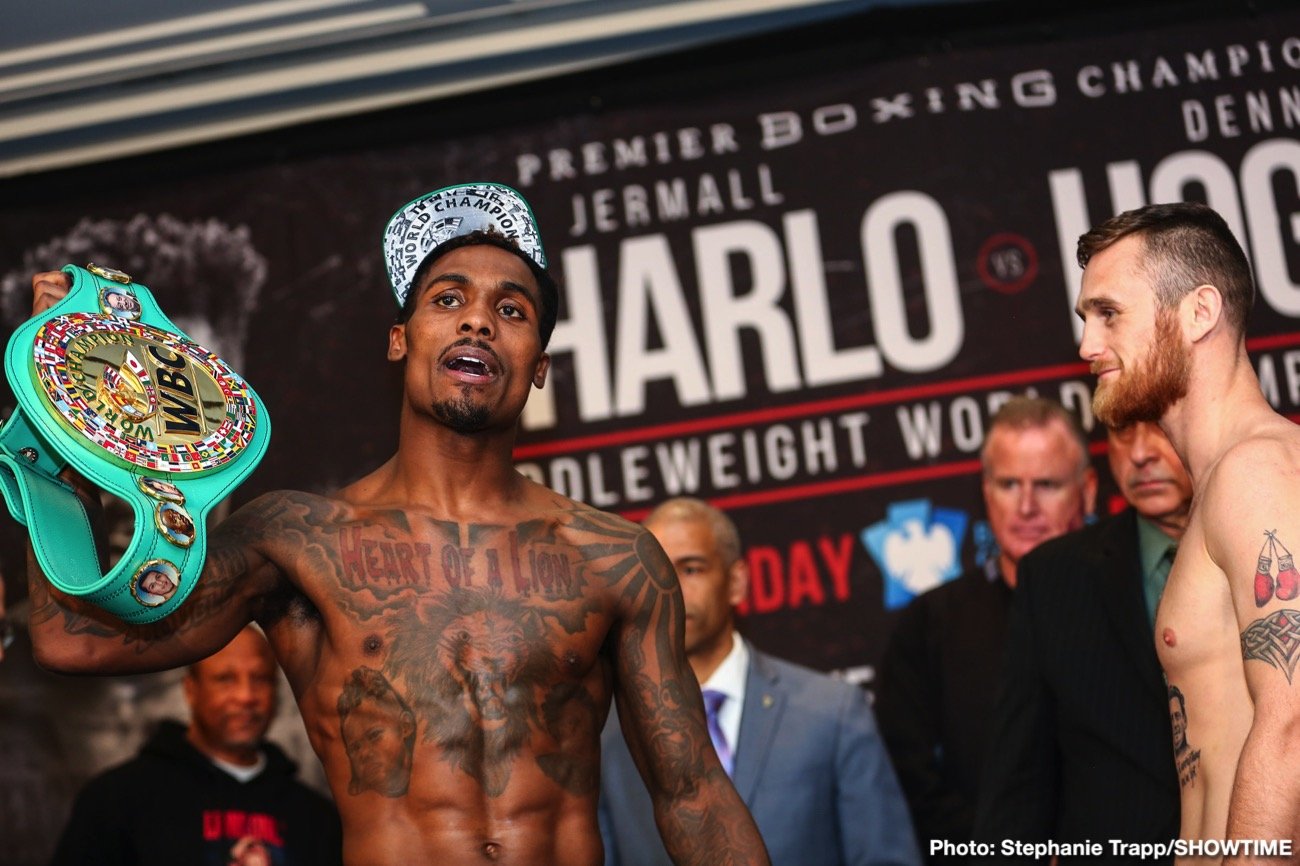 Jermall Charlo surprised fans on Wednesday in saying that he feels that Sergiy Derevyanchenko didn’t do enough to beat Gennadiy Golovkin last October. This opinion runs counter to the general boxing public, who overwhelmingly saw Derevyanchenko (13-2, 10 KOs) as the real winner of that fight with GGG (40-1-1, 35 KOs).

It’s impossible to know if Jermall (30-0, 22 KOs) means what he’s saying about the Golovkin vs. Derevyanchenko fight or if this was a comment made to mess with Sergiy’s head.

Charlo will be defending his WBC middleweight title against Derevyanchenko on September 26 on Showtime pay-per-view at the Mohegan Sun Casino in Uncasville, Connecticut.

Jermall’s twin brother Jermell Charlo (33-1, 17 KOs) will be defending his WBC junior middleweight title against IBF/WBA 154-pound champion Jeison Rosario (20-1-1, 14 KOs) on the same card on September 26 in a doubleheader.

“Derevyanchenko is a highly rated fighter and we’re both going to go in there to get the job done,” said Jermall.

“I didn’t think Derevyanchenko won the fight against Golovkin, but he definitely made it a lot closer than people expected.

“I didn’t think people knew about his style and what he brings to the ring. It was close, but I didn’t think he won the fight,” said Charlo. 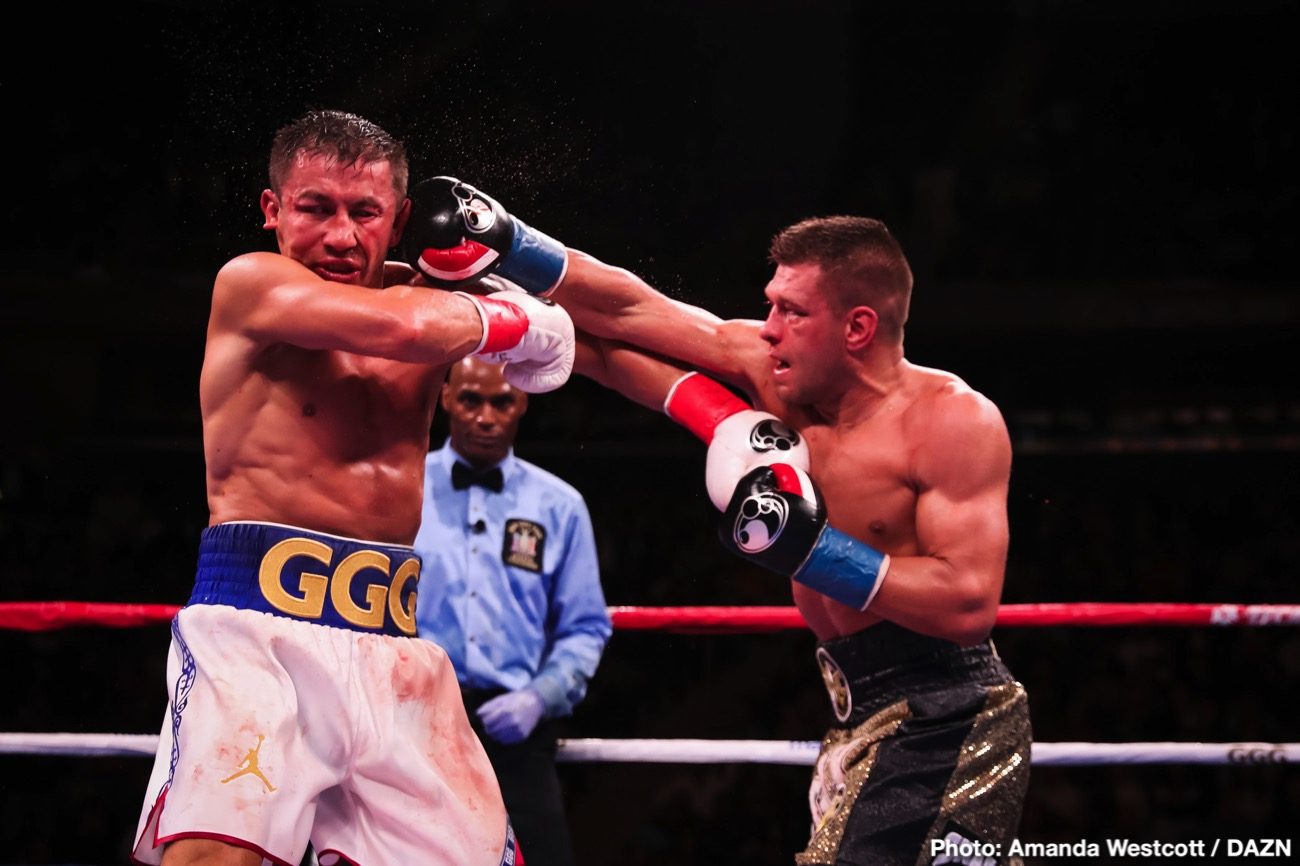 For Derevyanchenko, he’s no stranger to losing controversial decisions, unfortunately. His defeat against Daniel Jacobs was every bit as controversial in 2018 when the two fought for the vacant IBF middleweight title.

Sergiy 34, must feel like he has a hex on him when it comes to him battling for the IBF 160-lb belt. But it’s not magic working against Derevyanchenko.

It’s more of a situation in which the A-side fighter in boxing often wins when it comes to a fight going the distance, and it’s become the norm in the sport. Perhaps one day, we’ll have computers that score the matches, and the controversial decisions will be the thing of the past.

Derevyanchenko’s losses to Golovkin and Jacobs have shown that he needs to do a little bit more for him to make it more evident to the judges that he deserves the decision when going up against the A-level fighters.  When you’re not a big name, it takes a little more to get a choice in boxing.

What’s troubling is Golovkin, 38, didn’t feel the need to give Derevyanchenko a rematch, which is what the boxing public was interested in seeing. Golovkin has chosen to defend his IBF title against his mandatory Kamil Szeremeta. Those two will be meeting up later this year, perhaps at the end of the summer.

“Derevyanchenko has been in with the tough competition, but he’s come up short,” said Charlo in stating the obvious. “It would deliver a statement to the boxing world if I knock him out. The power is for real, and I can get in there and hurt just about anybody.

“I feel like we’re going to meet in the middle of the ring and let our hands go. May the best man win. My game plan is going to be to shut his game plan down. We’ll see on fight night,” said Charlo.

That would be a big statement on Charlo’s part for him to knockout Derevyanchenko because he’s not been hurt in any of his fights. Although Golovkin knocked Derevyanchenko down in round one, it was a flash knockdown in which he was hit on the top of his head while bent over.

Charlo would need to put his punches together for him to have a chance of knocking out Derevyanchenko, and that would be a risky thing for him to do. Jermall might get hit with something if he goes for a knockout against Sergiy.

Charlo has had it easy lately to defend his WBC title successfully against Dennis Hogan and Brandon Adams. Before those two fights, Jermall got lucky against Matt Korobov in beating him by a controversial 12 round decision in 2018 in New York. Boxing fans thought Korobov did enough to earn the win, but the judges had their interpretation of what went on.