Jermaine Franklin says he will take advantage of Dillian Whyte’s “chinks in his armor” to knock him out on Saturday night in their main event fight on DAZN at the OVO Arena in London, England.

It’s already well known that Whyte struggles against fighters that use uppercuts. Even if Whyte fixed this problem, he’s got to worry about Franklin’s left hook and overhand right. 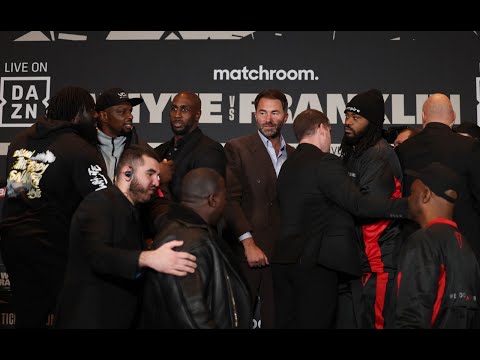 Franklin (21-0, 14 KOs) has been brought in to lose to make Whyte (28-3, 19 KOs) look good in a showcase fight. However, with Whyte’s weak chin, Franklin has the power to stop him and then face Anthony Joshua to make life-changing money.

It’s understandable why Matchroom Boxing promoter Eddie Hearn picked Franklin rather than another heavyweight because Whyte is well past his prime, and he can no longer take a good shot without going down.

If Franklin pulls off the upset, Hearn might be kicking himself afterward because he’s not well known, and he can’t stick him in a stadium fight against Joshua.

“I got some work in with Tyson [Fury]. It was great. I was in there learning new skills and how to attack differently because Tysons, not an easy guy to hit,” said Jermaine Franklin to Boxing Social about his preparation for Saturday’s fight against Dillian Whyte.

“I’m just ready. I’m ready to show the world what I can do. Yes and no. It’s a lot with the lights and stuff, but I’ve been in the lights before. I’ve had three TV fights on SHOWTIME, so I just stay focused on what I got to do.

“I don’t let the outside get to me,” said Franklin when asked if he was in awe fighting in front of a big crowd at the OVO Arena in London, with the carrot of a big money fight against Anthony Joshua hanging over his head should he upset Whyte.

“I think I have the power to knock him out with more than an uppercut. If that’s the punch that makes him weak, why not throw it? If I set it up at the right time, I’m going to use it.

“I’ve seen a few chinks in his armor, but this is a warrior’s sport. Just because the warrior lost one battle doesn’t mean you won’t lose the next. I don’t take him lightly. I’ve just seen a few chinks, and I try to capitalize off them.

“He tried to get in my head, but I’m from America. Everybody talks s**t. It doesn’t mess with me. We just kick a**, it’s as simple as that,” said Franklin when told that Whyte said that a lot of people come over from America, talk a good game but then fail to deliver.

“I’m not really dwelling on it right now. I’m just ready to take care of the task in front of me, and then afterward, we can talk about AJ,” said Franklin when told that he can make “life-changing money” if he beats Whyte to get a fight against Anthony Joshua next.

“Just tune in on November 26th on DAZN and look for me to kick some a**,” said Franklin when asked for a message to give to the fans. “Hopefully, we get a knockout with my hand raised and him on his back.” 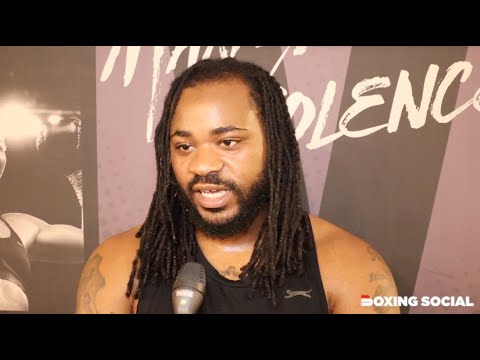