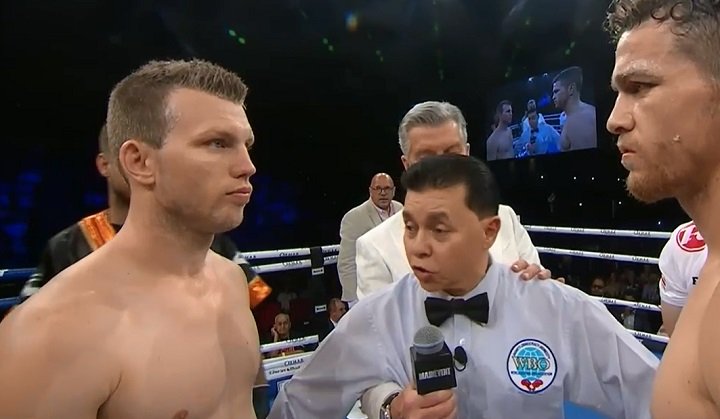 It might be hard to remember all these years on, but back in 2001 Zab Judah was a significant favourite to win going into his fight with Kostya Tszyu. Zab, a pound-for-pound entrant at the time as well as the unbeaten 140 pound IBF champ, was instead ruined inside just two-rounds in the unification bout. Tszyu was an established champion himself at the time but Judah was being touted for greatness.

But Tszyu, who claimed greatness himself, cracked Judah with a nasty right hand, the resulting damage forcing Zab to do the “chicken dance.” Fans remember well the way Judah’s mind was blown by the shot, how his equilibrium was utterly blasted to smithereens. Countryman Jeff Horn has watched the fight, and the KO (or to be accurate a TKO, but there was nothing too technical about it) many times and he has reportedly been working on his own right hand delivery as he engages in a secret “12-point plan” designed to see him to victory over heavy betting favourite Terence Crawford.

Horn, trained by Glenn Rushton, has been focusing on applying pressure and using his foot speed. Rushton says his fighter has the power and the physical strength to beat Crawford. Chief sparring partner Ray Robinson – the man who picked up a close decision win over Crawford at amateur level years ago – has been emulating Crawford’s style and approach, including the in-the-ring trash-talk Crawford may well use on June 9, and he says there is no doubt Horn is the stronger fighter.

“Jeff’s got a great right hand and that’s going to be a big weapon against Terence,” Robinson told Fox Sports in Australia. “Terence is super accurate with his punches but Jeff is much stronger and he hits harder.”

It would be a bigger stunner than the smashing win Tszyu scored over Judah if Horn managed a similar result against Crawford, but anything can happen and it can only take one punch in any fight. Horn has of course upset the odds before and may do so again. A quick win either way does look unlikely, but this fight is not the dead-cert win for Crawford many fans seem to think it will be.