On last night’s Devin Haney-Jorge Linares card, Ireland’s Jason Quigley scored the biggest win of his pro career as he edged Shane Mosley Junior over ten hard rounds to win the WBO NABO middleweight title. 30 year old Quigley won via ten round majority decision, the scores being 97-93, 96-94 and 95-95. Quigley is now 19-1(14) – the loss coming via corner retirement against Tureano Johnson. Mosley Jr falls to 17-4(10), he has never been stopped.

After picking up the big win, Quigley called for a shot at reigning WBO middleweight champ Demetrius Andrade. Andrade, who may or may not end up facing Chris Eubank Jr next, wants the big fights, with Canelo Alvarez and Gennady Golovkin in particular, but with these fights unlikely, who knows, maybe he could defend against Quigley if a Eubank Jr fight cannot be made. 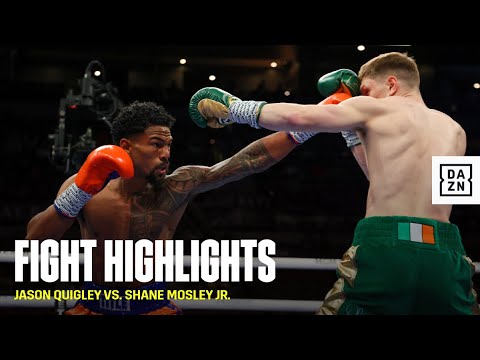 “I remember, three, four years ago when Boo Boo Andrade had no promoter, he had no real management going on, he was like ‘I’ll fight this Jason Quigley guy’ – he didn’t even pronounce my name right,” Quigley said after his win over Mosley Jr. “Boo Boo Andrade, now that you’re the champ, you’re always crying that you don’t have people to fight you. I’m not saying that I’m going to kick your ass. I’ll get in there and put on one hell of a fight with you. I’ve got a belt, you’ve got the main one, give me a crack at that title.”

Andrade, 30-0(18) is coming off a wide decision win over Liam Williams. WBO middleweight champ since October of 2018, Andrade has retained the belt four times. Andrade would be a pretty big favourite over Quigley if the fight did indeed happen but what other interesting options does the 33 year old have right about now? There are far worse fights to be made than Andrade-Quigley, that’s for sure.

As for Mosley Jr, it’s tough to see where he goes next. As close as last night’s fight was, though, it’s likely Mosley Jr will be calling for a rematch.