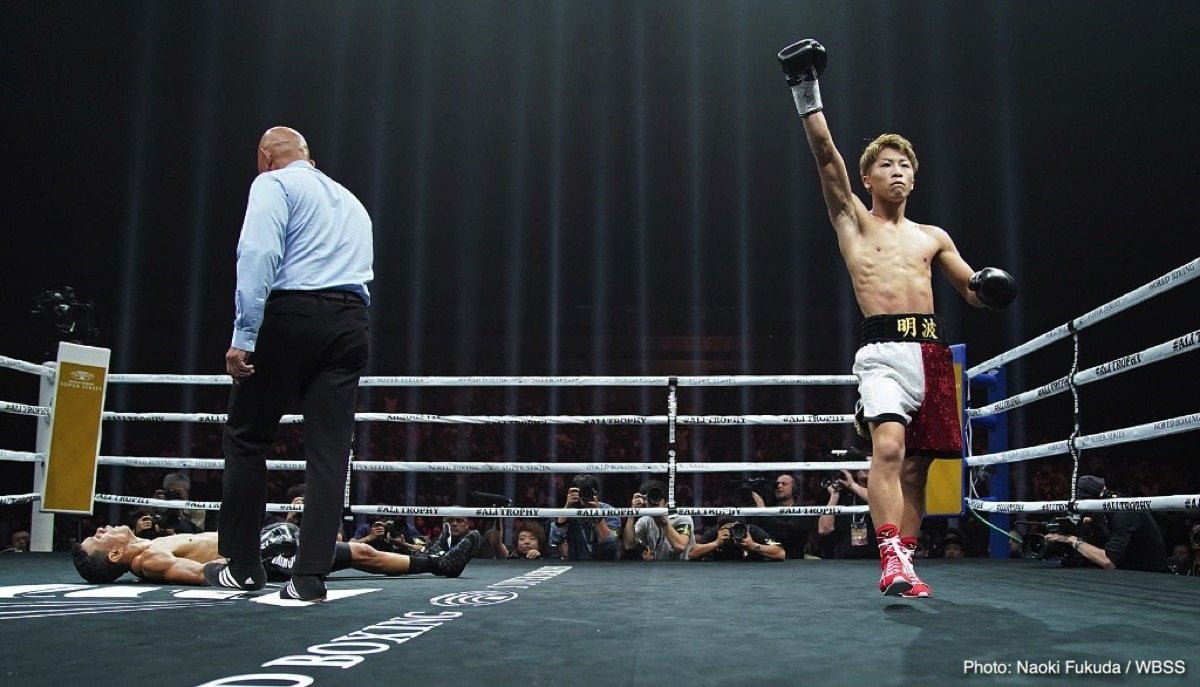 A ‘Monster’ is loose in Orlando: Inoue ringside to watch Rodriguez vs Moloney

And on a magical Sunday night on October 7th, in front of a sold-out Yokohama Arena in Japan, ‘Monster’ knocked out former world champion Juan Carlos Payano with an electrifying one-two blow just 70 seconds after the opening bell.

“I am satisfied with these fights. In fact, the faster it ends, the better it is,” Inoue says.

The fans in Yokohama clearly wasn’t disappointed with a pair of punches and only 70 seconds of action assessed on their smiles and the volume in their cheering. And their hero was equally happy with an early night.

“You want to wrap up your job as quickly as you can. I might not always speak openly about knockouts, but it is always on my mind.”

The 25-year-old (17-0, 15 KOs), a three-weight world champion (Light-flyweight, Junior-bantamweight, Bantamweight), tells that he had practiced the combination, making his executing right hidden from southpaw Payano.

“I threw a jab from the inside of Payano so I could blind him. That was the strategy and the last right was also something I have been practicing a lot and it happened to connect at the very beginning,” Inoue says.

Just a pair of punches was all it took to take out a man who had never been knocked out in his eight-year-long career.

“Having knocked my opponents out in my last two fights, now I know my punching power and sharpness are effective in the bantamweight class.”

“His performance was absolutely incredible. It is simply a statement. It is unbelievable to watch the way he switches from the left to the right, basically to knockout punches in one,” Sauerland says.

“I’ve seen guys knock people out in five seconds, but you must not forget; the guy he was facing was Payano. It wasn’t someone we picked up off the streets. It was a former world champion.”

“These are great punchers,” Sauerland says.

Canelo Alvarez to Hearn: 'I told you, easy money'

“But this (Inoue) is the best puncher in the world. This is without a doubt the No. 1 puncher on the planet. Not in Japan, not in Asia, not in America, but on the planet.”

“Inoue has set the bantamweight edition of the World Boxing Super Series on fire. The other guys in the tournament will look at Inoue and say; there is a monster in the field so I better train harder.”

In the semi-final, Inoue will face the winner of the Ali Trophy Quarter-Final between IBF World Champion Emmanuel Rodriguez and Jason Moloney. And Inoue will be watching the action ringside in Orlando and face-off with the winner in the ring after the fight.

“I think Rodriguez will win that fight. I expect him to be my opponent in the semi-final,” Inoue says.

The second Ali Trophy bout of the huge night of boxing in Orlando is a cruiserweight clash between Yunier Dorticos and Mateusz Masternak.

“I can’t wait to get over to Orlando,” said Moloney. “I really feel like this is my time to shine. I have been training so hard to achieve my dream of becoming World Champion and I will not let this opportunity slip.”

27-year-old Moloney (17-0, 14 KOs) had a prolific amateur career before joining the ranks of the professionals, including competing in the 2010 Commonwealth Games at only age 19. Since turning pro in 2014 Moloney has stayed unbeaten, and the ‘The Smooth One’ believes he can continue the winning streak and take the next step in his division.

The quarter-final ahead of him, a mandatory challenge against IBF World Bantamweight Champion Emmanuel Rodriguez (18-0, 12 KOs) from Puerto Rico, is the biggest test to date. A test Moloney feels comfortable in solving.

“I take great pride in being the first fighter to represent Australia in the World Boxing Super Series and I am 110% ready to bring this World Title back to Australia and advancing into the semifinals,” said Moloney.

“I’m not just in this tournament to make up the numbers, we truly believe that we have what it takes to go all the way.”

Fighting in the U.S. is nothing new to the Australian from Kingscliff, New South Wales, but this time the whole world will be watching.

“I fought over in the U.S. as an amateur but this will be my first time as a professional so I’m really looking forward to showing the U.S. and the worldwide audience exactly what I am capable of and putting on a spectacular performance.”

“Training has been fantastic, my team and I are very happy with how things are coming together. Rodriguez is a good fighter, but on October 20 I believe you are going to witness something very special!”

The second Ali Trophy bout of the huge night of boxing in Orlando, Florida is a cruiserweight clash between Cuban Yunier Dorticos and Poland’s Mateusz Masternak.