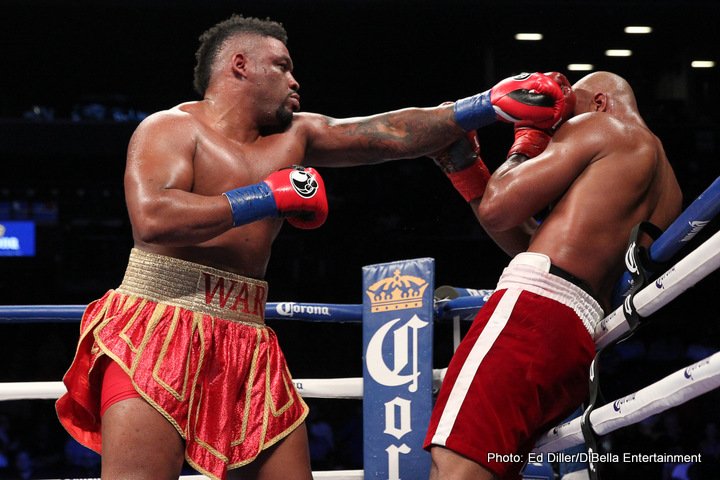 Unbeaten heavyweight contender Jarrell Miller has been talking, again. The massive New Yorker known as “Big Baby,” is targeting two British fighters, in Dillian Whyte and Anthony Joshua. Whyte, beaten only by Joshua, called out Miller and the 298-pounder told Sky Sports he is more than happy to fight, and KO, Whyte.

Miller, 19-0-1(17) says, no promises, he would also KO heavyweight champ Joshua if given the opportunity. Miller began by laying into Whyte, who was critical of the 29 year old’s recent performance in stopping Gerald Washington in eight rounds.

“I guarantee you that Dillian would have a harder time with Washington than I did,” Miller told Sky Sports. “People said I’m a slugger – have you watched any of my fights? I outbox guys, I box on the inside. Dillian is a slugger. There are times when I slug it out but he can’t throw combinations like I can. He isn’t as slick as I am. I would knock Dillian out way worse than Joshua did. I guarantee you that.”

There is no doubt, Miller is very fast for such a big man, fast of hand especially, and fans want to see him tested at the highest level. A fight with Whyte makes sense on so many levels. Let’s hope these two punchers do more than just talk and verbally attack one another.

But the fight Miller really wants is one with Joshua, a fighter he insists is not the real deal. Miller is not shy in predicting KO wins, that’s for sure.

“Most definitely [I’d welcome Joshua to the U.S]. I’d be happy to knock Joshua out,” Miller stated. “As soon as they want to fight in America, I’d be the first to jump at that fight. And I guarantee I’d knock him out inside seven or eight rounds.”

Miller seems reluctant to fight in the UK, for now at least, claiming he is the star, not Whyte. Joshua is clearly the star when it comes to a Joshua-Miller match-up, but AJ is aiming to box in the U.S soon (he was to have boxed Klitschko in a rematch in Las Vegas, but now will face Kubrat Pulev, most likely in Wales).

When Joshua does make his U.S debut, Miller, if he can remain unbeaten, would make a very marketable challenger for him.

On This Day: Roberto Duran Returns To The Ring For The First Time Since The “No Mas” Affair238 Total Shares
Joshua: “I Swear That If Usyk Wasn’t A Southpaw I Would Have Smoked Him!”225 Total Shares
Ryan Garcia only wants Tank Davis for next fight, not Teofimo Lopez172 Total Shares
Canelo Says He’s “More Dangerous” Now, Says He’s A “Wounded Beast” Going Into Trilogy Fight With Golovkin140 Total Shares
Broner Pulls Out Of Saturday’s Fight!134 Total Shares
Deontay Wilder – Robert Helenius “Being Finalized For October 15”116 Total Shares