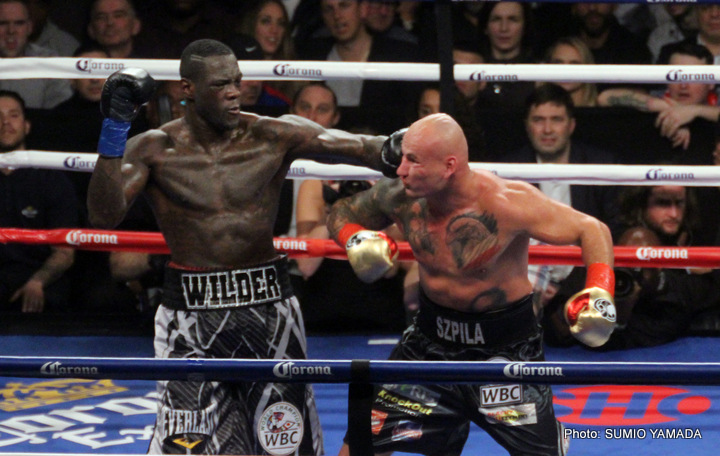 He’s got a big mouth and he’s not afraid to use it. No, not Tyson Fury, but another unbeaten heavyweight: New York’s Jarrell Miller. Miller is a colorful talker and fighter with power, and he is slowly building up a fan base with his trash-talking and his impressive KO wins. The latest to come under attack – of the verbal kind – from “Big Baby,” as Miller is curiously nicknamed, is reigning WBC heavyweight king Deontay Wilder.

Miller, 17-0-1(15) says the majority of fight fans in America do not know who Wilder is, while the 27-year-old has also criticized Wilder’s next challenger, Mexican/American warrior Chris Arreola. Speaking with Sky Sports, Miller – who has been compared to the great Riddick Bowe by some impressed experts – said the upcoming July 16th fight is “crap.”

“Man, nobody gives a **** about no Wilder and no Chris Arreola,” he said. “That is why more than 80 percent of America don’t know who the hell Deontay Wilder is. They say: ‘Who is that guy who has got a belt from Alabama?’ They know him as the wild guy and that is just the reason why people in his own country don’t know who he is. The opponent he is fighting is a washed-up Chris Arreola. The only people that care about him are the Mexicans in California and they are going to fight in Alabama.”

Miller questions how many people will watch what he refers to as “that crap.” Miller said Wilder should have faced Bermane Stiverne in a rematch in what would have been a better short-notice fight. Miller also sated how he would “KO Arreola within four-rounds max” if he fought him. Miller has a harsh tongue for the two other prominent heavyweight champions, in Anthony Joshua and Tyson Fury, and one day fans hope to see the talented New Yorker put his money where his mouth is and fight one of these champions.

It’s okay to talk, we want to know if Miller can back it up. So far, he has been able to, but against less than top-10 (or top-20) opposition. If Arreola were not challenging Wilder, he would perhaps have been a great opponent for Miller. Somehow, I don’t think that 4th-round KO prediction would have come true. And despite his criticism, I bet Miller tunes into the Wilder-Arreola fight next month.