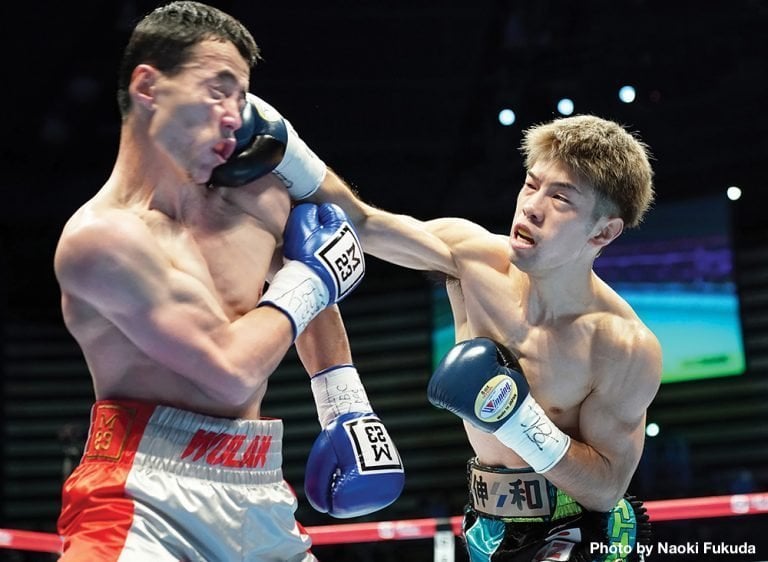 Former three-weight champ Kosei Tanaka, one of the most consistently thrilling lower-weight fighters operating today, announced over the weekend how he will make his return to the ring on December 11, against countryman Sho Ishida. Tanaka, 15-1(9) was last seen losing to the superb Kazuto Ioka, this on New Year’s Eve in Japan. Due to such a considerable amount of time passing, Tanaka fans (and you can firmly place yours truly amongst his fan base) worried the all-action warrior might not return.

Now, thankfully, the 26 year old is back – or he is soon to be back. Ishida, 29-2(15) is a good fighter and Tanaka could certainly have picked a far easier foe to come back against (Tanaka being stopped in the eighth round by Ioka, thus losing his bid to win the WBO super-flyweight title, this the fourth weight class he has competed in). The December 11 fight will be a ten-rounder, fought at 115-and-a-half pounds, the fight set for The Nagoya Congress Centre. It’s not yet clear if fans will be permitted to attend (this due to the still ongoing coronavirus situation).

But to repeat, it’s great to hear Tanaka is coming back. According to a news story from Asian Boxing, Tanaka still aims to become a four-weight champion, yet he has not named any super-flyweight champion he has in his sights (it’s tough to imagine Tanaka, as good as he is, getting revenge over Ioka). Tanaka says he has been working on his overall skills and that he feels he has learned from the loss to Ioka.

Tanaka, who ruled at minimumweight, light-flyweight and flyweight, is an all-action warrior who has given us at least two modern day classics – see his wars with Sho Kimura and Ryoichi Taguchi – and as long as that stoppage loss to Ioka has not taken too much out of Tanaka, either physically or mentally, he should be giving us more great action in the coming months.

29 year old Ishida has never been stopped and his two losses came against good fighters; with Kal Yafai beating him in a WBA super-flyweight title fight in 2017, and Israel Gonzalez decisioning him in December of 2019. Since then, Ishida has won one, beating a 3-0 Toshiya Ishii by decision in November of last year. It is possible that Ishida and Tanaka could both be somewhat ring-rusty come December 11.

Again, a very solid comeback fight for Tanaka – a great entertainer who deserves to be a bigger star outside of Japan than he is. Let’s see if Tanaka shows any ill effects from that heavy loss to Ioka.