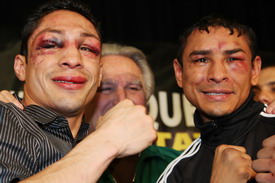 photo by Tom Casino/Showtime – Fight fans more than likely read the bad news that broke last week regarding how retired Mexican warrior Israel Vazquez will soon undergo an operation to remove his fight-damaged right eye. This news – news the unbelievably brave, in out of the ring, Vazquez has taken with the same courage he displayed in his career – goes to show just how much fighters risk when they fight. Vazquez, who retired after an unnecessary fourth fight with countryman Rafael Marquez, is a classic example of a warrior who gave of himself above and beyond in the ring.

Vazquez, who retired at 44-5(32) in 2010, thrilled fans with his epics against Marquez X3, Oscar Larios and Jhonny Gonzalez. It is the rivalry with Marquez for which “Magnifico” is best remembered and revered though. The two men, between March of 2007 and March of the following year, gave us quite simply one of the most fierce and evenly matched series of fights in lower weight boxing history. Crammed full with skill, class, brutality and raw courage, the three super-bantamweight fights – one, the first, won by Marquez, the next two won by Vazquez – would have been recognised as classics in ANY era.

It was during these wars that Vazquez picked up damage to both of his eyes, the right in particular. The fourth fight, which saw a past his best Vazquez being comprehensively beating inside three one-sided rounds, resulted in Vazquez needing further surgery on his right eye; to no avail sadly. Had Vazquez retired after his second win over Marquez, who knows, maybe he would be in better health with his eyes today. Also, had there been no fourth fight, Vazquez would have won the rivalry and Vazquez-Marquez would be looked at as perhaps THE finest trilogy in boxing history? Better (if not bigger) than Ali-Frazier, Leonard-Duran and Barrera-Morales? Yes, these three fights were and are that special.

Vazquez now faces another kind of battle; one nobody would fail to be scared by, and all we fight fans can do is wish the great warrior the best of kind wishes. Vazquez deserves to be ranked as one of the finest Mexican fighters ever, as does his former rival Marquez. How touching it would be to see both retired legends enshrined in The Hall of Fame one day. Both men gave their all in the ring, Vazquez especially.