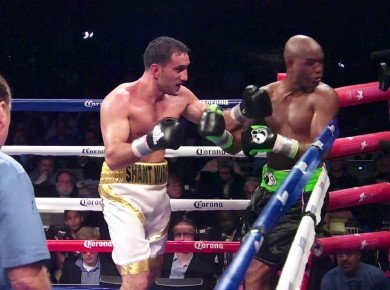 49-year-old Bernard Hopkins (55-6-2, 32 KOs) has surprised a lot of boxing fans by being able to come back from a 12 round decision loss to Chad Dawson in 2012 and turning things around by winning his last three fights against Tavoris Cloud, Karo Murat and Beibut Shumenov.

Hopkins was seen as nearing the end of his career when Dawson beat him, but Hopkins has definitely turns things around with his last three wins. While it was nice that Hopkins beat Cloud, Murat and Shumenov, the wins were still largely shallow ones given how vulnerable all three of those fighters were.

Murat had previously been easily beaten by Nathan Cleverly. Cloud had been exposed by Adonis Stevenson and beaten far worse by him than Hopkins. Shumenov had already lost to Gabriel Campillo in one of two fights. Many boxing fans saw Shumenov losing both of his fights to Campillo.

So we’re talking about great fighters, are we? Hopkins is getting a lot of credit for beating guys that were already beaten previously, and seems to giving Hopkins more positive press than what he should be getting.

On November 8th, Hopkins will be facing the monstrous puncher WBO light heavyweight champion Sergey Kovalev (25-0-1, 23 KOs) in a unification match at the Barclays Center in Brooklyn, New York. Kovalev, 31, is 18-years younger than Hopkins and considerably stronger.

Kovalev doesn’t have Hopkins’ hand speed nor his experience, but he’s got the youth and power going for him. That might be more than enough. Hopkins no longer is able to move around the ring like he used to, and he spends a lot of time against the ropes nowadays. In his fights against Shumenov and Murat, Hopkins frequently positioned himself with his back against the ropes the way that aging fighters do when they no longer have the leg strength and/or stamina to move around the ring.

It’s quite possible that on 11/8, Kovalev is going to show that Hopkins is the same fighter that Dawson beat two years ago. Kovalev could make Hopkins look like an old man in this fight, especially if Hopkins retreats to the ropes and tries to shoulder roll his way through 12 rounds of heavy bombardment from Kovalev. The thing is that Kovalev isn’t going to head hunt the whole time if Hopkins is going to be covering up or leaning way over the ropes to try and keep from taking head shots. Kovalev will go to the body and give Hopkins problems there. 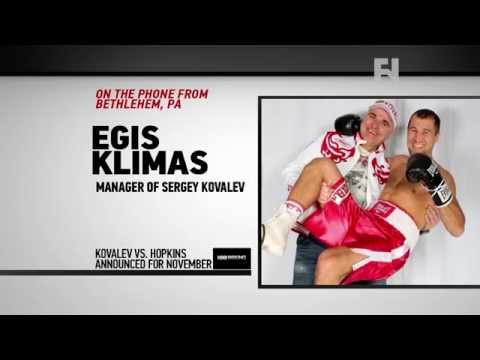 I believe that Hopkins isn’t even as good as he was in the Dawson fight in 2012. The only reason he’s looked good since then is because he’s been matched against very beatable fighters in Cloud, Murat and Shumenov. These guys would likely lose to many of the top contenders in the division. The fact that Hopkins was able to beat him them is no big deal.