Bob Arum says if Devin Haney asks for $5 million for a fight against three-belt lightweight champion Teofimo Lopez, it won’t happen. The Top Rank promoter Arum is interested in making the Teofimo vs. Haney fight, but not if it involves paying Devin (26-0, 15 KOs) a ton of money.

Arum says he’s on board with putting the Lopez-Haney fight together if it’s based on percentages in the way he put together the Terence Crawford vs. Shawn Porter contest.

Haney isn’t on record for asking for $5 million for the Teofimo fight, so it’s unclear where Arum came up with that figure.

But by Arum saying that he won’t do the deal if Haney asks for that figure, he’s letting him and his promoter Eddie Hearn know that he won’t be able to ask for that kind of money.

Haney will be defending his WBC lightweight title against interim champion Joseph ‘JoJo’ Diaz Jr. (32-1-1, 15 KOs) next month on December 4th on DAZN at the Mandalay Bay Resort & Casino in Las Vegas.

It’s far from a certainty that Haney, 23, will win that fight against the far more experienced Jojo Diaz Jr because he’s facing a guy with a lot of talent who has been around the block a few times in his career.

“It depends on the deal that can be made, and it depends on if they [Team Haney] take reasonable guarantees against percentages like Porter and Crawford had, then why not?” said Bob Arum to ESNEWS on whether a fight between Devin Haney and Teofimo Lopez can be made.

For a fight like that, you would think that $5 million would be a reasonable figure to ask for, but maybe Haney doesn’t bring a lot to the table at this early point in his career.

It’s no secret that Haney has fought many old guys lately, and he was almost knocked out by 35-year-old Jorge Linares earlier this year in their fight on May 29th.

Linares repeatedly hurt Haney in the championship rounds and had him clinching excessively to avoid getting knocked out in rounds nine through twelve.

That’s the type of fight where you’d like to have seen a rematch because Haney didn’t prove that he was the better fighter of the two.

If anything, Haney lucked out that he had a passive referee that allowed him to hold nonstop for the last three rounds without penalizing or disqualifying him. 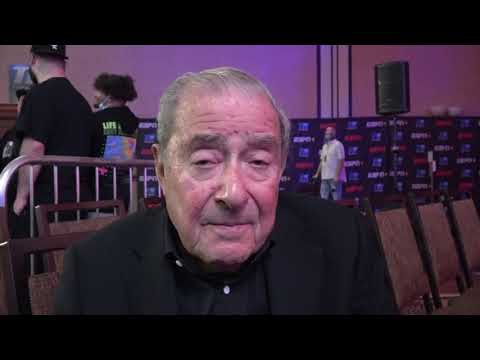