Though the great Floyd Patterson still holds the record as the youngest WORLD heavyweight champion in boxing history, with Patterson becoming world champ at the age of 21 years, 10 months and 3 days, this when he stopped Archie Moore in November of 1956 – Mike Tyson became the youngest-ever claimant of a version of the world title; this when he crushed Trevor Berbick in November of 1986, aged 20 years, four months and 22 days of age, Tyson winning the WBC belt. 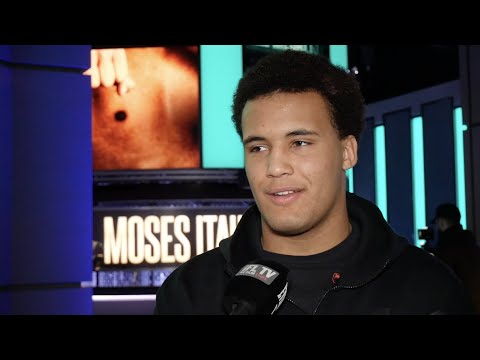 Now, having just signed with Frank Warren and Queensbury Promotions, 18 year old Itauma says he is on a quest to break Tyson’s record. Set for his pro debut on January 28th, on the under card of the Artur Beterbiev-Anthony Yarde light-heavyweight title fight at Wembley Arena, Itauma says he feels he can win a world heavyweight title before 2025.

Itauma, who lives in Kent, UK and turned 18 on December 29th, is expected to be moved fast, and this is what the decorated amateur wants. The gifted southpaw who has already been labelled as “the future of the heavyweight division” by some, won gold at both the Youth World and Youth European championships.

“I want to become the youngest heavyweight world champion since Mike Tyson who was 20 years old,” Itauma said when speaking with Mirror Fighting. “I need to take small steps but also ensure that I step up the tasks very quickly. Youngest ever world heavyweight champion is in my mid-term goals but it is something that I believe in can achieve before 2025. It is not what I am thinking about right as of this second, but I want to let that come once I have grown into a professional. I have gone from not having any press at all to this and it is crazy.”

What Tyson did was truly astonishing; with “Kid Dynamite” going pro in March of 1985 and, after 27 pro bouts, ripping the WBC belt from a pretty accomplished fighter in Berbick, this after less than 21 months at pro level. Tyson often fought every month as he made his rapid rise up the rankings, with Tyson sometimes fighting twice in one month. It seems doubtful any fighter, no matter how talented, will ever match that hectic, non-stop schedule.

Still, it sure is going to be interesting, and hopefully a lot of fun, watching Itauma as he attempts to put his own name in the history books. Already, there is the weight of huge expectation on Itauma’s shoulders.