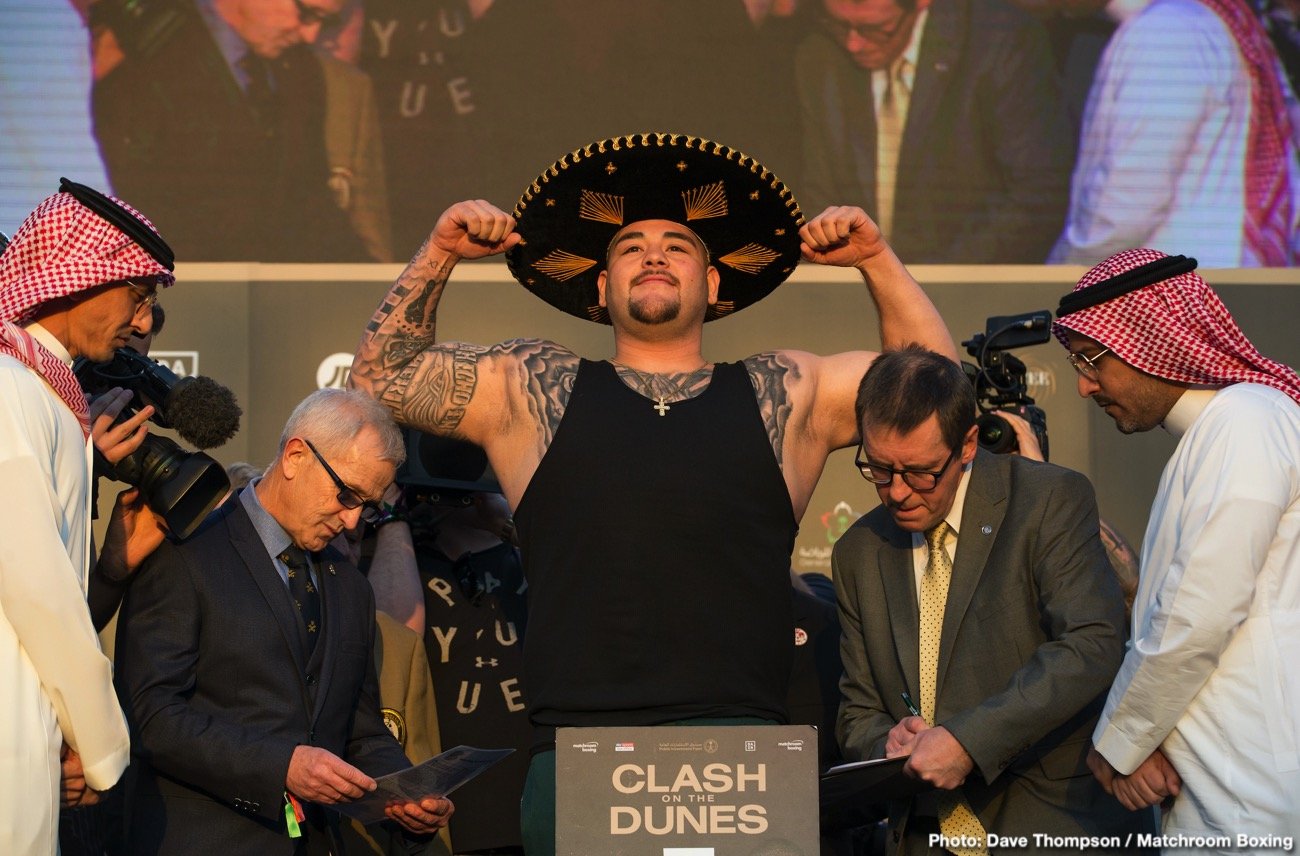 Like everyone else, heavyweight living legend George Foreman has an opinion on the whopping great poundage heavyweight ruler Andy Ruiz tipped-in at at yesterday’s official weigh-in in Saudi Arabia. Some people feel Ruiz’ weight of a little over 283 pounds, some 15 pounds more than he weighed back on June 1 when he shocked Anthony Joshua by seventh-round stoppage win, doesn’t mean all that much, that the Mexican/American is a big guy anyway.

Some people have gone even further, suggesting Ruiz has done a “con job” on Joshua, on us, and he didn’t really weigh as much as it appeared. These folks think, very seriously, that Ruiz, who wore a sombrero, tracksuit leggings and a vest, had concealed weights about his person as he stood on the scale. Believe this, and the idea that Ruiz “conned” Joshua into coming into tonight’s rematch at too low a weight (AJ weighed 237 yesterday, ten pounds less than he tipped-in at for the first fight), if you wish.

But Foreman, who knows more than many of us will ever have a hope of knowing about boxing, sure ain’t buying the conspiracy theories. Speaking with USA Today, the former two-time world champ said Ruiz has “blown it,” due to his excessive poundage.

“He’s blown it, really,” Big George said. “He’s blown his opportunity. He threw away a great opportunity really because now he can be outboxed. Guys will tell you, ‘This is the way I look. I told you I’ve been there and I feel better at this weight and everything.’ But nobody, absolutely no-one, wants to put their body on display and look that much out of shape. They don’t want to do it, I’m telling you. Don’t let him trick you.”

As fans saw, Ruiz declined to take off his vest yesterday, so was this a case of him being embarrassed, ashamed of his body as Foreman thinks? Because of how well he has fought in the past whilst carrying well over 260 or 270 pounds, Ruiz is getting the benefit of the doubt from many fans right now, and, yes, he could well make the weigh-in numbers irrelevant later on today by beating Joshua again.

But Foreman feels, as do many other people, that Ruiz was guilty of enjoying himself too much after his life-changing win in New York: “You are a celebrity and everybody wants you to taste some food,” the all-time great said. “So he got caught up.”

Foreman now feels Joshua will win a decision tonight; assuming the former champ has not been permanently damaged by the June defeat.

“If he’s had enough time to recover, he should whip Ruiz without any problem,” Foreman said of Joshua. “Just box him, box him. Take him into deep water, keep boxing him. And he should win a 12-round decision.”

It certainly will prove very interesting seeing if Ruiz can carry that 283 all night long with no ill effects.