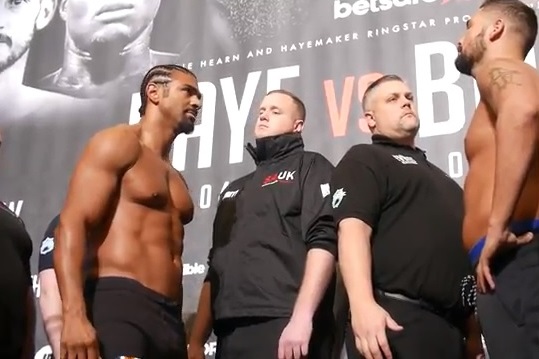 In this, a big year for big boxing rematches, promoter Eddie Hearn wants to add Tony Bellew-David Haye II to the list of returns that includes Ward-Kovalev II, Joshua-Klitschko II (most likely anyway) and Rungvisai-Gonzalez II. In speaking with Sky Sports News HQ, Hearn said that the public want to see the rematch (do you, really?), that he himself wants to see it, and that David Haye “needs it.”

Hearn argues how in Haye’s case, there is “no other fight for him other than Tony Bellew,” but that Bellew has plenty of options. Hearn added how the rematch, if it does happen, will likely go down in December, giving Haye’s terrible Achilles injury enough time to fully heal – “to make sure he is 110-percent,” Hearn said.

But as wild and unexpected as the first fight was, and as surprising as its outcome was, do we really need to see it again? Wouldn’t Bellew be better off going for a world heavyweight title shot, against WBO ruler Joseph Parker, a fight Hearn says can be made? Which fight would you rather see? What if Bellew-Haye II does happen and Haye’s injury resurfaces? Talk about one big waste of money for the paying fans. Is it worth the risk?

Haye, still undergoing therapy on his leg, also needs a new trainer, having split with Shane McGuigan. It will be one hard road back for “The Hayemaker,” that’s for sure. If he does get into the ring with Bellew again, chances are good Haye will end his career having lost two fights on the bounce.

For even in the early going of the fight back in March, before the nasty injury, Haye was struggling. Missing the target and getting tagged himself, the once super-explosive Haye looked like a faded fighter. By December he will be almost a year older, why would anyone really think Haye will be able to get his revenge in a second fight?

Bellew should go for it, take the ultimate gamble, and fight for a world heavyweight title. That would be a fight worth paying for.