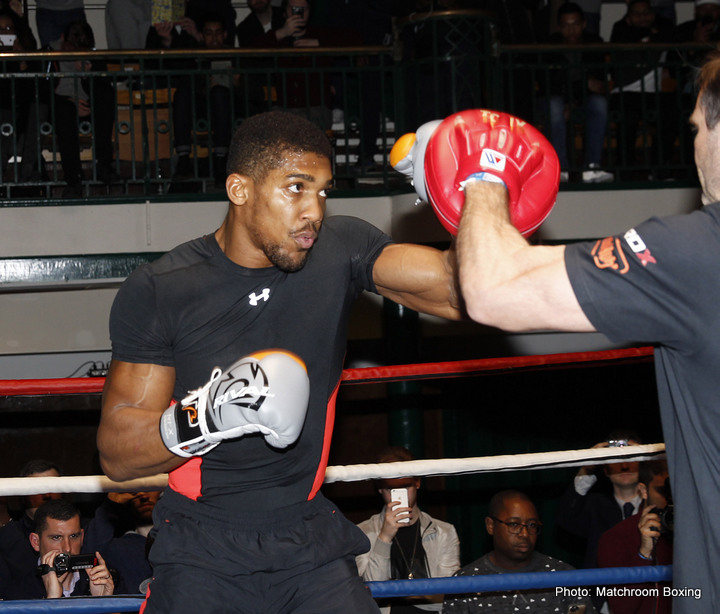 The boxing world (usually) moves fast, and though hugely hyped British heavyweight star Anthony Joshua has yet to defeat reigning and defending IBF champion Charles Martin in what is being looked at as his first real test as a pro, his promoter Eddie Hearn is already being asked questions about who Joshua will fight next.

Due to one fight and any progress with regards to its official announcement being very much on the slow side – the Tyson Fury-Wladimir Klitschko return – Hearn has told Sky Sports how Fury might take another fight instead – one against Joshua. Hearn, like the rest of us, is wondering what is going on with Fury-Klitschko II, and he suggests the fight might fall though. If this is the case, Hearn said today, “don’t rule out Fury against A.J in the summer.”

“We can fight who we want next,” Hearn said with regards to Joshua’s maiden, voluntary defence of the IBF belt he is sure his fighter will relieve Martin of in three day’s time. “I don’t expect that to be Fury but you never know in this game – maybe the Wladimir Klitschko fight falls through. It’s taken long enough. The last fight was in November and now we’re in April. There’s no concrete date so don’t rule out Fury against A.J in the summer.”

Hearn added how Saturday night “comes first” and that a victorious Joshua would not receive his mandatory obligations until November of this year and that he could fight anyone he wanted to before then. Hearn said another possibility – this one far more likely than a Fury unification clash – would be a Joshua-Dillian Whyte rematch. The first fight, one that saw Joshua rocked early and having to dig deep before stopping Whyte in brutal fashion in the 7th-round, would likely sell again.

But a Fury-Joshua fight would be absolutely massive, here in 2016 or next year. Common sense says this all-British super-fight will not happen as soon as Hearn teased it might. This match-up will only get bigger and bigger as long as both heavyweights remain unbeaten. However, with the Fury-Klitschko return fight proving so puzzlingly hard to make, for whatever reasons, the question of whether Fury will try and take another fight instead could prove a valid one. How long is the heavyweight champion of the world expected – or more importantly, contracted – to wait for Klitschko?

Fury loves to fight and he will not want to sit out too many more months. And until he is beaten, Fury will be THE heavyweight champion. Whatever unfolds inside a sold-out O2 Arena on Saturday night will not change that.