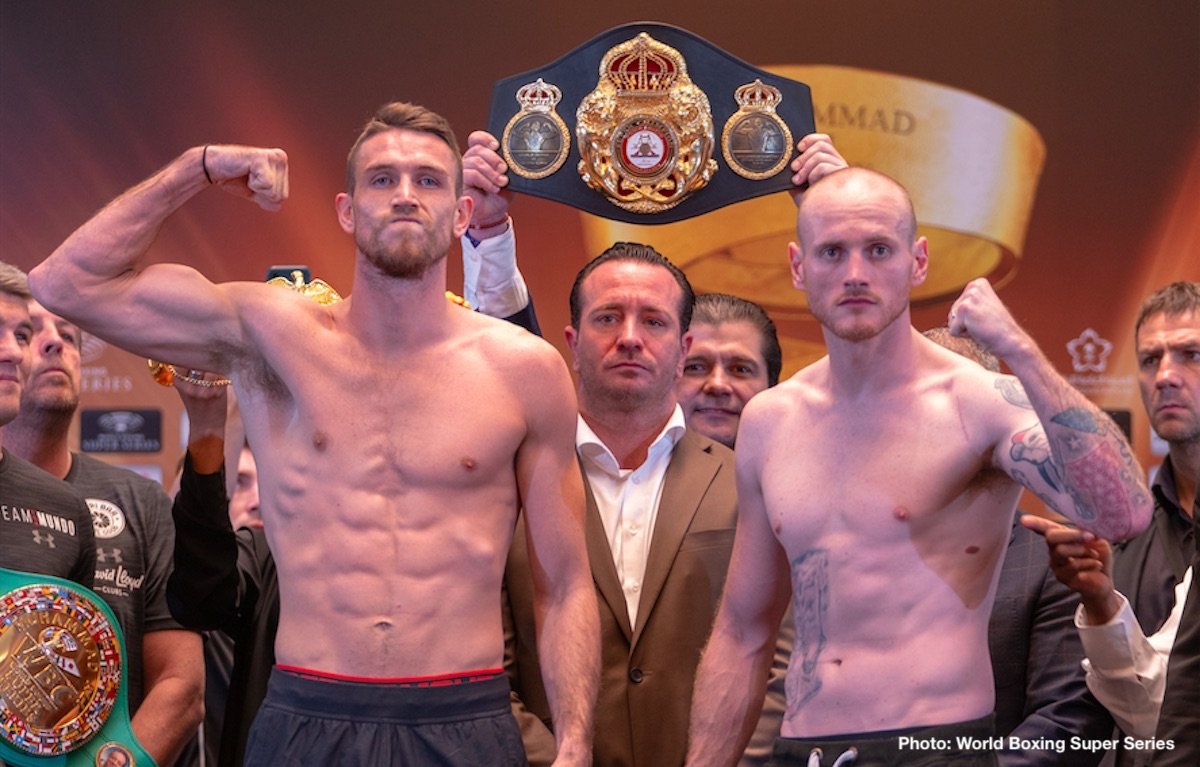 George Groves and Callum Smith both made weight today ahead of their historic Ali Trophy Super Middleweight Final tomorrow night at the King Abdullah Sports City in Jeddah, Saudi Arabia.

Groves, the defending WBA Super World Champion, tipped the scales at 76.1 kg, and “The Saint’ says the time for talking is over as he believes his experience and superior skill set will prove the difference in their all-British showdown.

“It’s fight time now. I’m ready to go,” said Groves. “All the talking is done. I’m sick of talking. I’m ready to fight. This is the most prestigious fight I’ve ever been involved in. It’s a must win for me. An absolute must win. 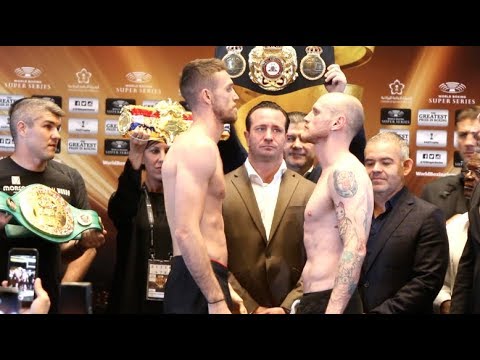 Smith, the WBC Diamond titlist who weighed in at 75.9 kg, described his countryman as looking like an ‘old man’ as he looks to stake his claim as the best super middleweight on the planet.

“He’s a good fighter. I have a lot of respect for him but he looks like an old man,” said Smith. “He looks like he’s had a very hard career. He’s had a very good career but there’s a lot of miles there and I just think I’m the younger, fresher, better fighter man, and I’m here to take his title.

“I can do a bit of everything. I can box. I can fight. I’m very big for the weight but I do the weight very well. I feel good, I feel strong and I’m here to do a job and that’s become World Champion and I believe I’m going to do it.

“It’s a massive chance. As I’ve said previously, this fight ticks a lot of boxes for me. There’s a lot at stake. There have been a lot of good World Champions who never had the chance to fight for the Ring Magazine title, and I’m getting a chance to win it in first World title fight. That’s all the motivation I need. I can become the best on the planet, and that’s exactly where I want to be.” 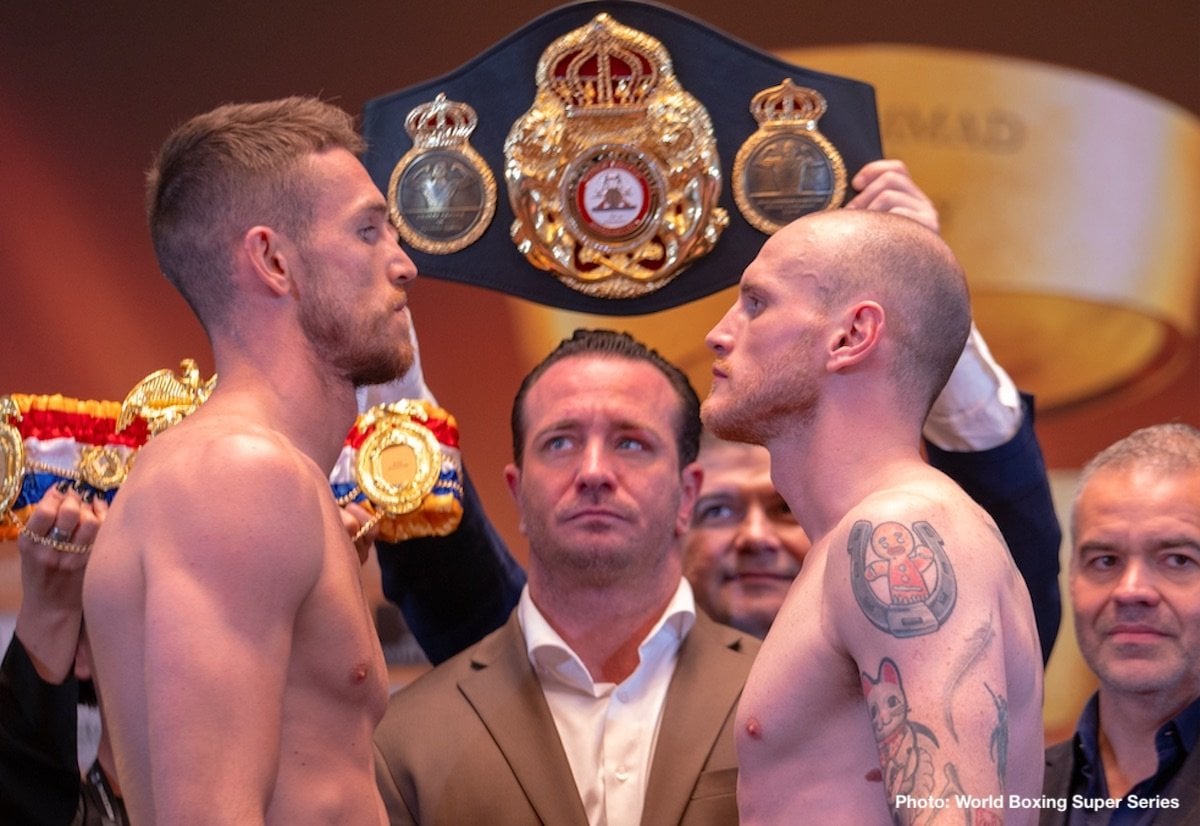 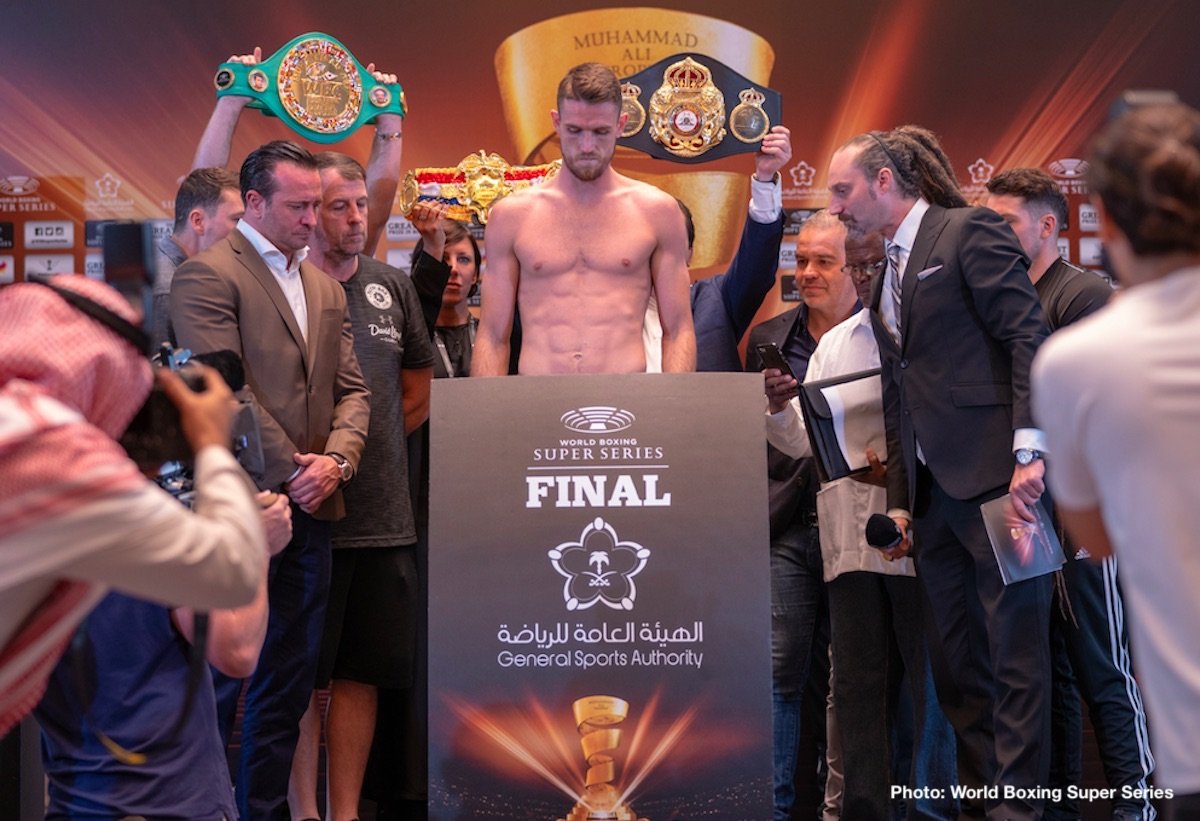 George Groves and Callum Smith were in confident voice at the Final Press Conference ahead of their Ali Trophy Super Middleweight Final on Friday at the King Abdullah Sports City in Jeddah, Saudi Arabia.

The all British-battle between the tournament’s top two seeds will close the hugely successful inaugural season of the World Boxing Super Series and determine the division’s number one fighter with a host of titles up for grabs.

Groves, the defending WBA Super World Champion, booked his place in the final with impressive victories over countrymen Jamie Cox and Chris Eubank Jr, while Smith, the WBC Diamond titlist, secured his spot with decisions over Erik Skoglund and Nieky Holzken. The prestigious Ring Magazine title will also be on the line. 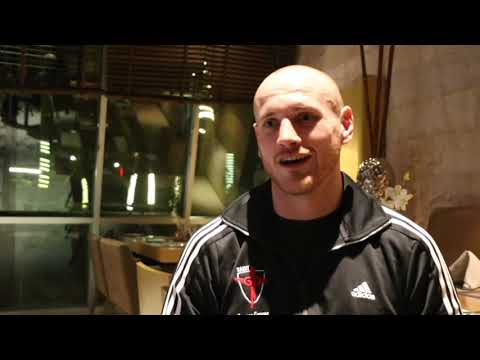 “It’s great to finally be only a day or two away from the fight. We’ve had a great camp in the end. It took a long time to get back to full fitness, but we’re there now, and everything has gone as good as it possibly could. After such a long training camp and a long time since my last win, I can’t wait to fight and to collect some new belts and the Ali Trophy.

“I have been involved in some real big fights as a professional. I recently became WBA Super Champion and ranked number one in the division. Up for grabs for me this time around is the Ring Magazine belt, the WBC Diamond Championship and obviously the Ali Trophy as well.

“The tournament is only in year one, but everyone is extremely excited about it. It is a very prestigious thing to be associated with it, and I’m going to make sure I win it and win it well to stake my claim as the number one in the division.”

“It is a massive opportunity for me. Every fighter who starts boxing dreams of becoming a World Champion and I was no different. I turned professional and I believed my abilities were good enough to tell me to the very top and Friday night I get a chance to be there.

“A win over George puts me as the best super middleweight in the world, and a World Champion and a Ring Magazine Champion. It ticks a lot of boxes for me this fight, there is a lot at stake and that’s why I turned professional, for fights like these. I’ excited. I’m in a good place. I feel good, I feel strong. I’m ready to do what I came here to do and that’s become a World Champion.” 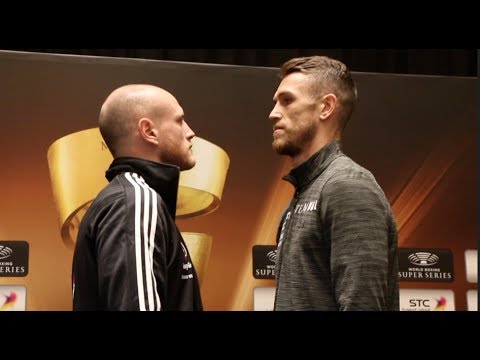 “It’s very different (from Eubank Jr. fight). You’ve got a guy who’s 6 foot or 5’11 and another guy whose 6’3’’. Completely different styles and that has been reflected in our training camp.

“I believe Callum is a much better fighter than Eubank Jr. and George will have to be better on the night, but I’m very confident that we are going to come away with the win. George has got the experience and I think the experience is going to tell in this fight. Calum has been in this position for a very long time. He has waited for this opportunity so we are expecting the very best Callum Smith.”

“There’s not much really to be said here. You’ve got the number one and number two seed of the tournament meeting in the final. Everyone is well aware of George Groves. His attempts at World titles and becoming World Champion, for which I think the whole nation in the UK was really pleased for him.

“This is now Callum Smith’s opportunity. His chance to shine, and he’s now got to go take this opportunity with both hands. We’re excited and ready to go, and ready to take care of business on Friday night.” 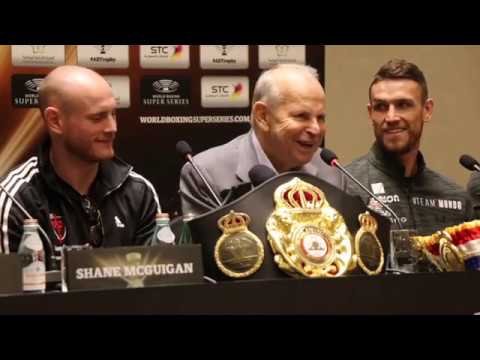 “For us it is a big day on Friday when we come to the final of the first round of the World Boxing Super Series. We’ve had one final already in Moscow and on Friday it will be the final everybody has been looking forward to in the super middleweight division, one of the strongest divisions in boxing.

“On Friday, we have the two best super middleweights in he world fighting on Friday for this most prestigious trophy and I myself can’t wait to see this fight. That means something when, like me, you have seen thousands of fights. It will be a very special occasion.” 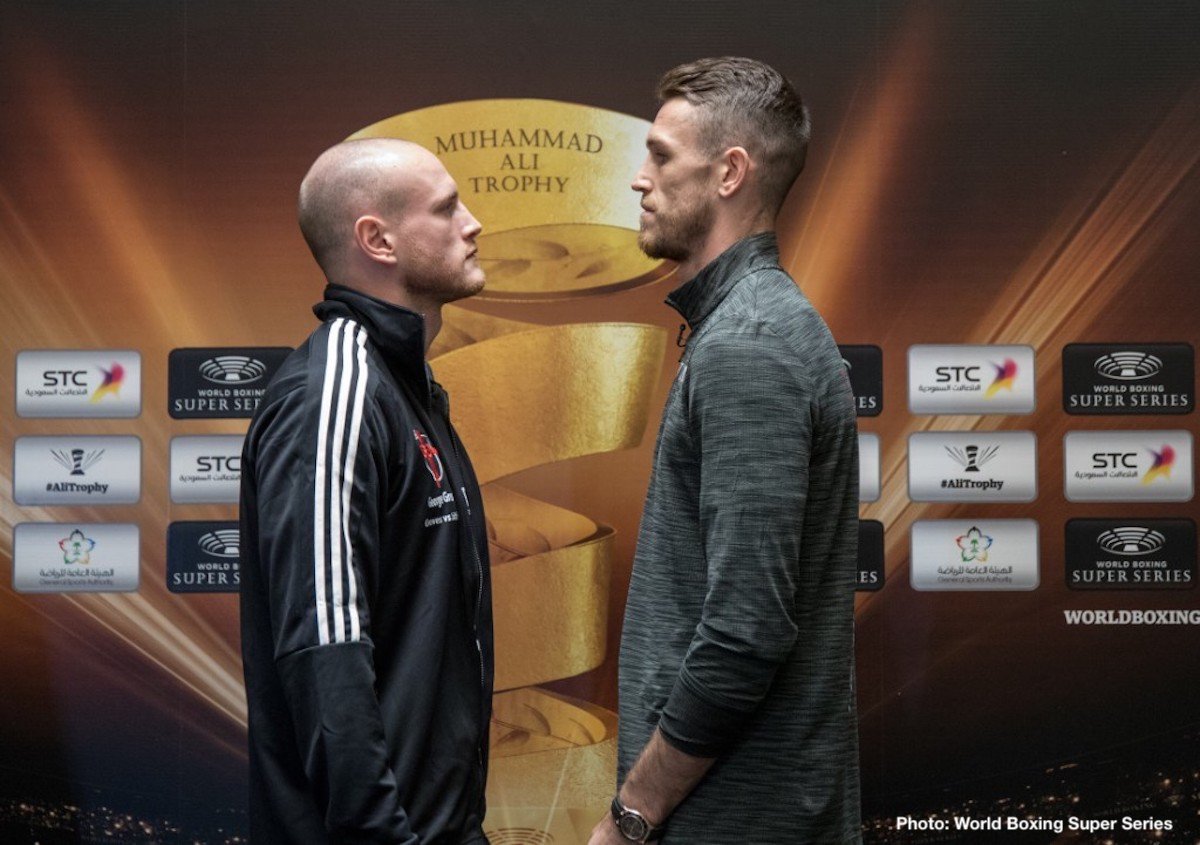 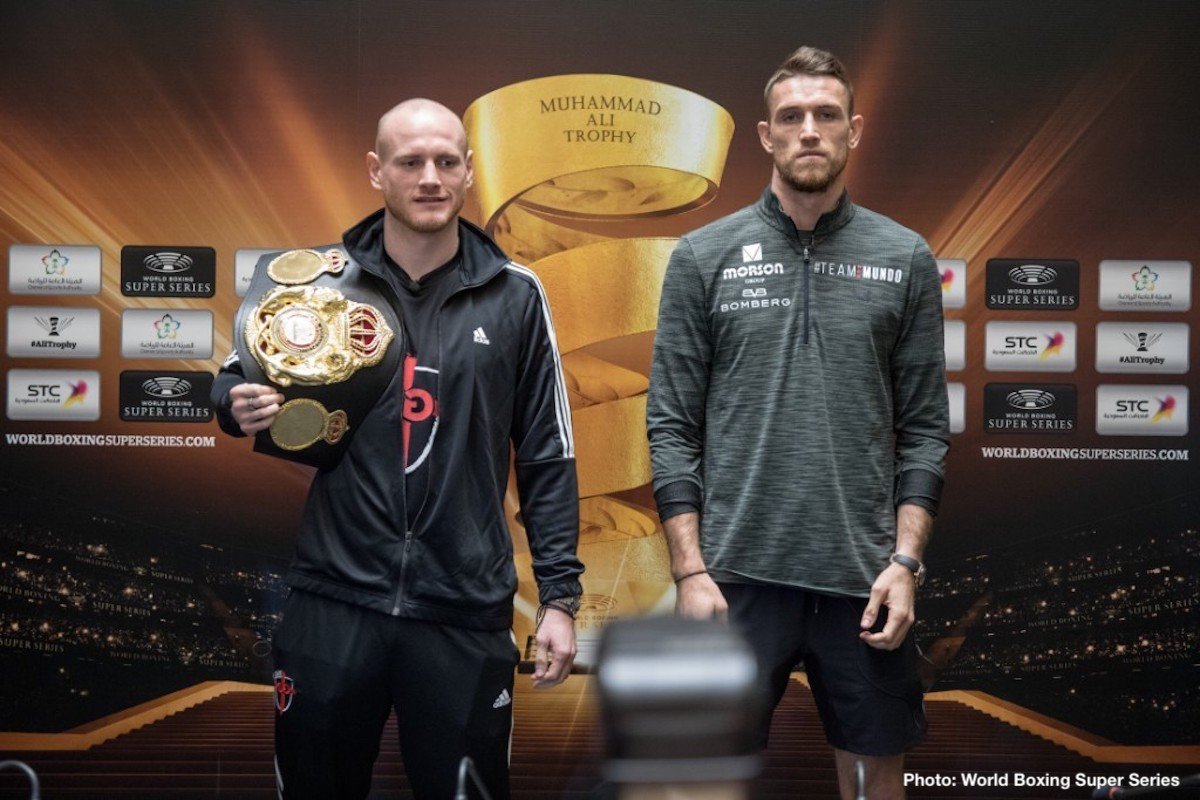 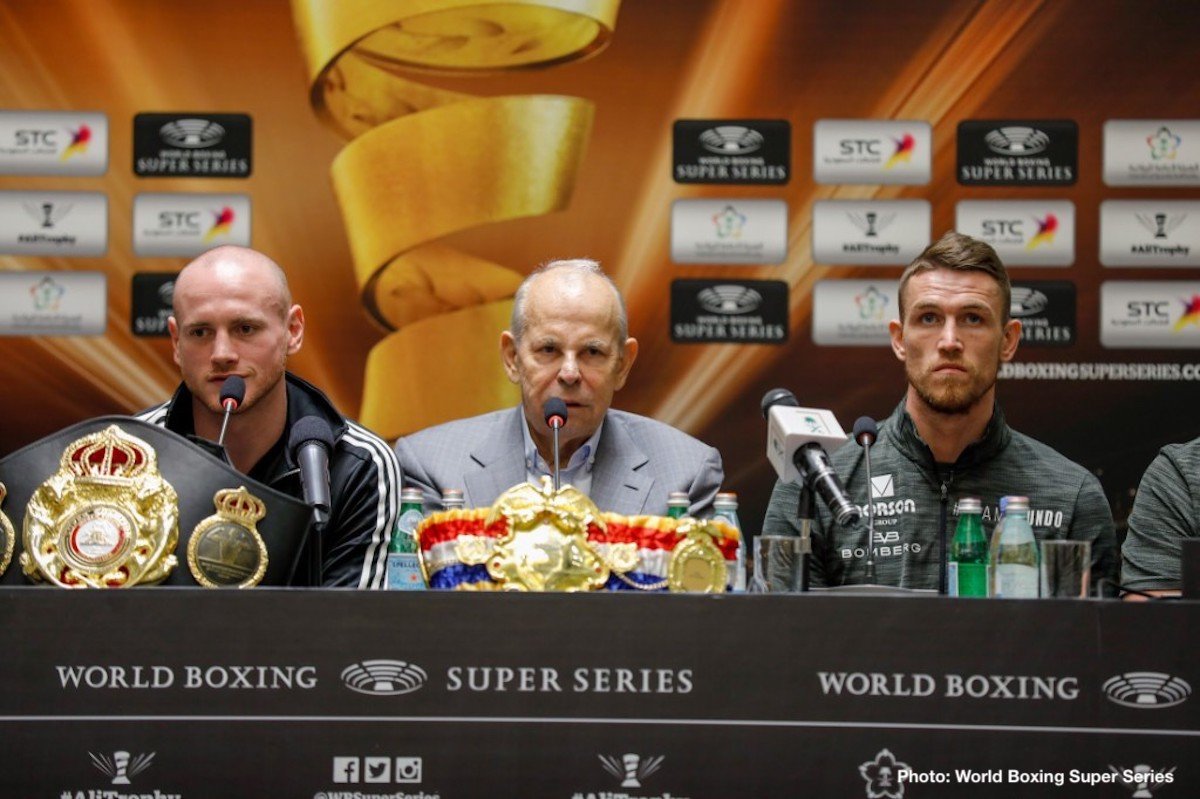 “I am the form of my life,” said Groves after the classic display of shadow boxing and speedy pad work.

“I am not too fussed about Callum, to be honest, I don’t know how he is feeling. I am concentrating on myself. That’s what works for me, that’s the winning formula. As long as I’m in a good place no one is going to beat me.

“Everything out here has been better than expected, you know, I have never been here before. But the food has been fantastic, the people have been lovely and our accommodation is great.”

Callum Smith also appeared in the same optimistic mood ahead of his first shot at a world title and the unique chance to take home the Muhammad Ali Trophy at 168 lb.

“I’m excited, there is a lot at stake,” said ‘Mundo’. “Win this fight I will have achieved what I always wanted to achieve. I am so close to finally doing it all.”

Smith arrived in Jeddah Friday, a few days earlier than Groves, and it has been easy to adjust to the new surroundings.

“We did the set-up over the weekend and it feels like I am at home. could be anywhere in the world as long as my family is with me. I am good, I woke up this morning as a happy person.”

Wednesday the combatants will meet, exchange words and go head-to-head at the pre-fight press conference.