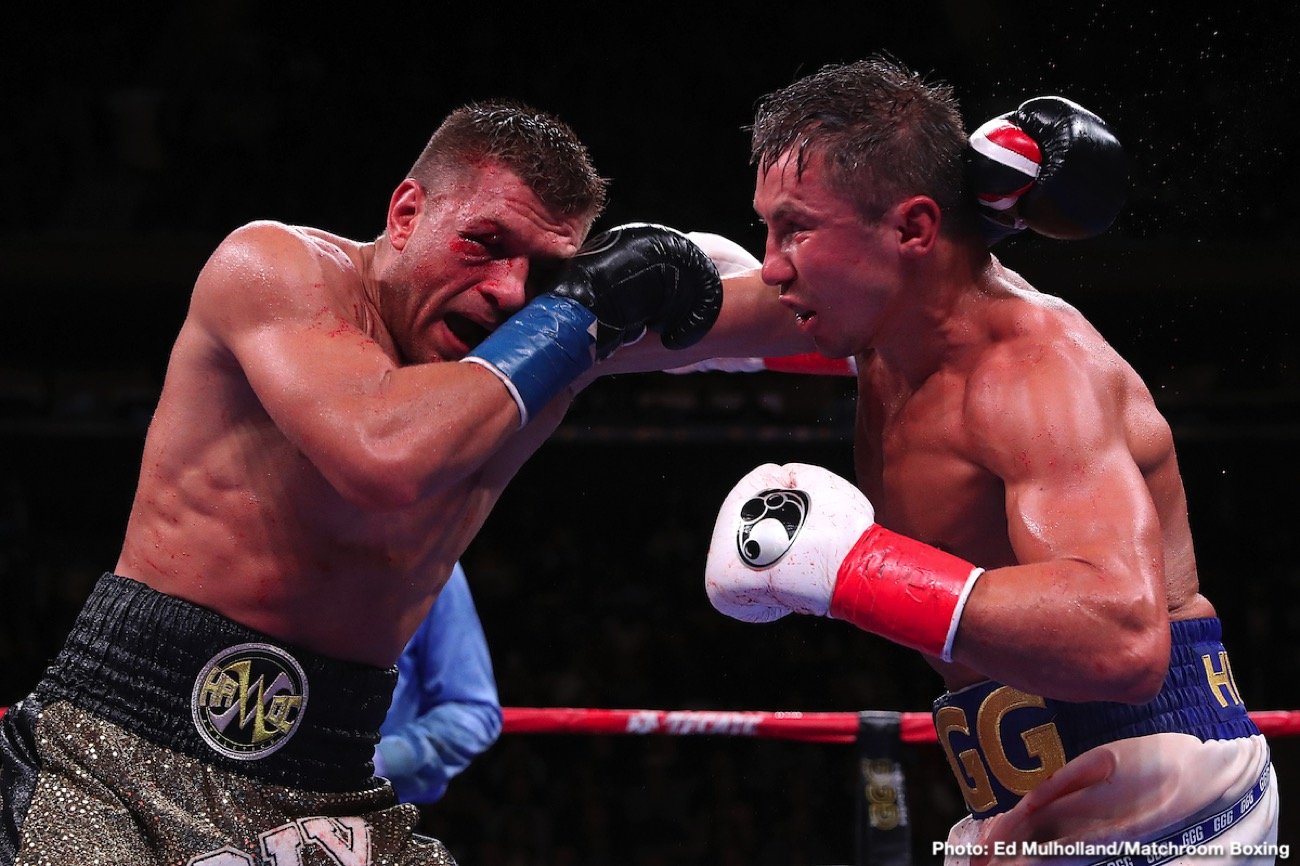 Gennady Golovkin fought Sergiy Dereyanchenko while ill tonight, according to his promoter Eddie Hearn. He says that Golovkin (39-1-1, 35 KOs) has been ill all week long with an undetermined illness that he just found out about on Friday. Hearn believes that Golovkin’s illness is the reason why he failed to look good on Saturday night in winning a close 12 round unanimous decision The scores were 114-113, 115-112 and 115-112.

The odds-makers wont be too pleased at learning that Golovkin fought while ill, because this is a news bit that they would want to know.

Golovkin won the vacant IBF middleweight title in beating Derevyanchenko on DAZN at Madison Square Garden in New York. After the scores were announced, the Madison Square Garden crowd was furious with them showing Golovkin with boos. What’s interesting is that the crowd that originally cheered GGG when he entered the ring tonight, booed him loudly.
The fans had been transferred from GGG to Derevyanchenko based on his superior performance. The fans were pro-Golovkin when he entered the arena, and when they left, they were now Derevyanchenko’s fans.

“It was one of the best fights I’ve seen. It was brutal,” said Golovkin’s promote Eddie Hearn of Matchroom Boxing to IFL TV. “Derevyanchenko unbelievable. He won’t say it, but Gennady has been ill all week, and it’s been a real struggle for him, and he’s kept it quiet. He won’t even say anything, but I will, because even though Derevyanchenko deserves all the respect in the world, what Gennady had to go through tonight, the well he had to go through, and he showed much heart. Derevyanchenko was absolutely brilliant,” said Hearn.

“In the 1st round I was thinking, ‘An early night and an easy touch.’ I really fancied that Derevyanchenko would be really difficult in this fight, moving well with Andre Rozier having a great game plan. But after the first round, I thought, ‘what a result, this is going to be all over.’ And he [Derevyanchenko] just came back. Very close fight. I just spoke to Keith Connolly, and he said, ‘Oh, we won that fight.’ It was a very close fight. I actually had Gennady winning the last two rounds to make the difference for Gennady to nick the fight,” said Hearn.

Its too late for illness excuses

It sure would have been nice if GGG had revealed that he was sick BEFORE his fight against Derevyanchenko. Right now, Hearn looked pathetic making excuses for his fighter GGG after his controversial win over Derevyanchenko. From the outside looking in, Hearn comes across like a promoter desperately trying to save his fighter Golovkin from being seen as tarnished goods by boxing fans. Unfortunately for Hearn, he’s like a boy with his finger stuck in a dam, trying to keep it from leaking. The boxing fans aren’t going to believe his attempts at damage control by blaming Golovkin’s performance on him being sick.

Hearn unsure if Golovkin will give Derevyanchenko a rematch

“I’d love to see a rematch. I don’t know,” said Hearn when asked if he’d consider makig a rematch. “I don’t know what to think at the moment. I saw that Gennady’s had looked nicely swollen, so he’ll have to get that checked out, and he’ll probably have a mandatory [against Kamil Szeremeta] as well, but who wouldn’t want to see it again. I know some will like Gennady, and some will like Derevyanchenko. So if there’s any doubt, maybe that’s something we’ll look at in 2020. No disrespect to Derevyanchyenko, but that’s not the type of fight that he necessarily wants to be in.

You know the fight [Saul Canelo Alvarez] that he wants to be in, but sometimes you come unstuck against guys that come in with the great performances. Derevyanchenko couldn’t have done anything more. He gave everything. his cut was horrendous. I thought it would be stopped within a couple of rounds, and I think the Commission did well, because you’ve got to give a fighter in that position every chance, and they gave Derevyanchenko every chance. And it was a brutal, brutal fight, back and forth. Derevyanchenko took some huge shots,” said Hearn.

Just looking at what Hearn is saying, Golovkin won’t be giving Derevyanchenko a rematch. Hearn has already laid out the possible options for GGG’s next fight and they are as follows:

Hearn pushing Golovkin to fight Andrade, Saunders, or Callum might be interpreted by boxing fans as a self-serving move, considering that those three fighters are with his Matchroom stable Derevyanchenko ISN’T one of Hearn’s fighters. Hence, he’s not getting the push.

“Derevyanchenko’s body work on Gennady was great, and vice versa,” said Hearn. “Again, probably not, but Gennady wants to be in fights that people want to see,” said Hearn when asked should Golovkin give Dereyanchenko a rematch. He wants to be in great fights, and there’s fights he of course wants. Demetrius Andrade, who was in the ring doing his thing, Billy Joe Saunders is there, Callum Smith is there. But people would want to see the Derevyanchenko fight. Canelo is the fight that Gennady wants, and that fight is number 3 that will be just as good as number 1 and number 2, and he’ll be ready for that when it comes.

Callum Smith has got to beat John Ryder first. The plan is Anfield if he does, and Golovkin in Anfield is a sellout. It’s 60,000 or however many they’ll let us have there. When you come through a fight like that, it’s tough, because you’ve got Demetrius Andrade inside the ring, ‘Hey, I respect you, but I want to fight you.’ Gennady is like, ‘Let me have a breather.’ So we’ve got to see. He’ll have a rest. He will have a mandatory have to deal with at some point. He doesn’t want to lose that belt. He just won it,” said Hearn.

Golovkin will need to think long and hard before he makes the decision to fight Saunders, Andrade or Callum, because he’ll likely lose to all of them. If Golovkin fought then six years, it wouldn’t be a big deal. He was still a good fighter back then, but not now. The way GGG looked tonight against Derevyanchenko, he would even lose to Kamil Szeremeta.

“So we’ll have to see what happens with the IBF, and then Canelo is the fight. But will Canelo fight him? Maybe he watched that, and said, ‘Actually, he struggled a bit there. I’ll fight him,’ but he’s got Kovalev. But massive respect to both. just incredible, incredible fight. No, because he kept it really quiet. It just found out about it today,” said Hearn about Golovkin’s illness. Bad, bad,” said Hearn when asked how bad Golovkin’s illness is. “Any illness on fight week isn’t good, especially when you’re making weight, and there was a lot of concern. But he got through it. That’s what you’ve got to do.

“Fighters got to come through it. All fighters get ill in camp. It’s something I didn’t know a great deal about. I just found out today. I heard it from somebody else yesterday, and obviously you don’t want to give those things away as a fighter. You certainly don’t want them to know that you’ve been unwell, but it happens. You can see that in the fight. But Derevyanchenko made it. It wasn’t the. If Derevyanchenko wasn’t good enough, it would have been over in the first three or four rounds. He forced it. He made it tight. He did all the things that he needed to do to force the fight.

That’s just what happens in a close fight. Derevyanchenko was a massive underdog. Listen, some people probably thought that Derevyanchenko nicked the fight. I’ve seen some of the media stuff, and some had Derevyanchenko winning,” said Hearn.

Without a doctor’s note, I’m sorry, Hearn’s illness excuse for GGG doesn’t work. Hearn needs a doctor to back up what he’s saying about Golovkin being sick, otherwise it just looks like he’s trying to keep the boxing public from viewing GGG as over-the-hill.

DAZN had him winning by a round,” said Hearn. “But if you’ve got someone winning by a round, a round the other way. I just felt that he just edged the fight on the last two rounds. We’ve got to do our own thing, and make our own plans. See how his hand is, let him have his rest, and look at his mandatory situation.

“But of course, that’s what he signed up to do [fight Canelo]. He wants to fight Canelo. Szeremeta, the Polish guy that boxed tonight that knocked out a Mexican [Oscar Cortes]. When you win a vacant title, you know the mandatory comes. So we’ll have to see what’s next time-wise,” said Hearn.