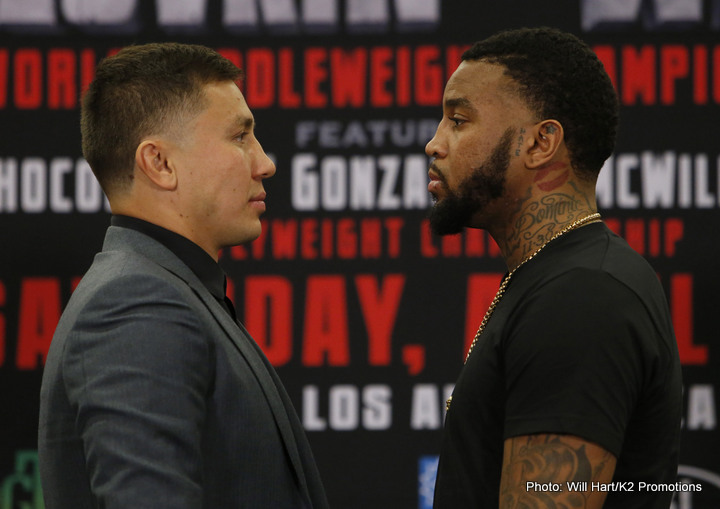 Here are the quotes from the participants.

“This is a big opportunity for Dominic Wade, I remember what it was like before I became a champion, I’m sure he’s very hungry for this opportunity and will train hard.”

“Bernard Hopkins has a great record of title defenses, but my focus is not on his record but on my story.”

“This is my next step and I’m very excited to continue building my story. I have a great deal of respect for Dominic. I look forward to fighting at my second home, the Forum on April 23.”

“It’s a joke for Billy Jo Saunders to want to face me right after we announced this fight, he’s not serious.”

“I want to fight Canelo and many big fights, big shows, but it’s not frustrating for me to
face other fighters.”

“I’m ready for this, people ask if I’m nervous, not at all. I’ve been a fighter all my life, always wanted to be a world champion. When this opportunity came up I was so excited I could have run 30 miles.”

“I know how good Gennady is but I’ll be ready on April 23 to be victorious and show the world who the best middleweight is.”

“I see flaws in his game that I can take advantage of. He’s very strong but also very basic in
some ways.”

“Our philosophy has always been to work with any manager or promoter for Gennady. We did this deal within a week working with Al Haymon and Tom Brown.”

“From a commercial standpoint, the fight is bigger if Gennady and Canelo both win their upcoming fights.”

“Gennady is the first non-Puerto Rican fighter to sell out Madison Square Garden in many years.”

“I have to continue to have multiple options when putting together fights for Gennady.”

“With Gennady’s commercial value we can make lucrative offers such as we did for
Billy Jo Saunders.”

“My commitment to Gennady is to work towards him becoming the undisputed middleweight champion.”

Much thanks to Dominic for taking the fight, he was very excited when offered this challenge.”
We got this done in a week which tells you how excited we were to make this fight.”

“I have to remind everyone as Gennady says, he wants all four middleweight belts, so It’s not hard to keep him focused. This keeps him motivated, he wants to be the undisputed middleweight champion. No way was he going to give up the IBF belt.”

Wade is not spectacular but he is undefeated, I’ve followed him since he was an amateur. We’ll prepare for the best middleweight in the world and we’ll be ready.”

“It’s a big part of history to break Bernard Hopkins’ record and will be great for Gennady’s record. Wade is the next step; we’re going to prepare for the utmost. “

“We will be ready and prepared for this moment. We’ve already started training and we’re ready to pull the upset and shock the world. Dominic is hungry to win the world title and he will be ready to on April 23.”