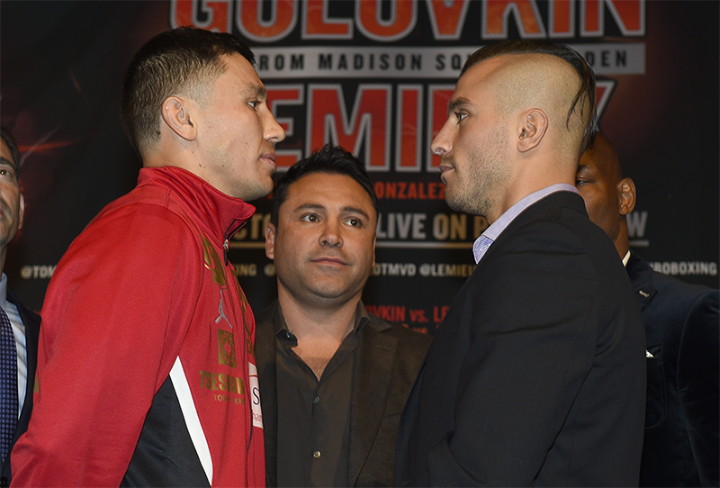 Fighting out of Los Angeles, California, Golovkin is returning to Madison Square Garden for the fourth time where an expected sold-out audience will await him in his first world title unification bout and headlining his first HBO Pay-Per-View event. Lauded from fans and media worldwide as one of the sports premier boxers, Golovkin has stopped his last 20 opponents in a row and has compiled a 91% knockout ratio, the highest in middleweight division history.

Lemieux burst onto the US boxing scene with a thunderous tenth round stoppage of Gabriel Rosado on December 6, 2014 in Brooklyn, New York also his HBO debut. On June 20th, the Montreal, Canada native was victorious over Hassan N’Dam earning the IBF Middleweight World Championship.

“Good afternoon, I am happy to be here again. Madison Square Garden is like my second home.

“I want to thank my team and my family for this opportunity.

“Thanks to HBO for all of the support and bringing the biggest stage to us.

“Thanks to K2 Promotions, Golden Boy Promotions for making this amazing deal for us for this great unification fight.

“Wow! Hello New York! I can’t be more proud to be here today. I know I came a long way to get here.

“I am not going to stand up here and talk about training camp, I am sure Golovkin and I know that at our level we are going to be at our best selves.

“I have faced victories, defeats, but nothing is more exciting and more gratifying than victory such as I am planning on Saturday.

“I have made a lot of changes in my life. All of I what I have done has lead me here and I am extremely excited and proud to be here. I am here to make history and I promise that I have done everything it takes to make sure that I don’t leave empty handed I will leave with the belts.”

“We also have the best co-feature possible, Gonzalez vs. Viloria is going to be a tremendous compliment to these two gentlemen [Golovkin and Lemieux]. Both fights are going to be exciting and are the types of fights that can’t be missed, they can end at any second.

“I want to thank everyone from K2, HBO and Golden Boy for all their hard work promoting this fight. I also want to thank all of the staff behind the scenes their perfect dance partners to this fighting game. 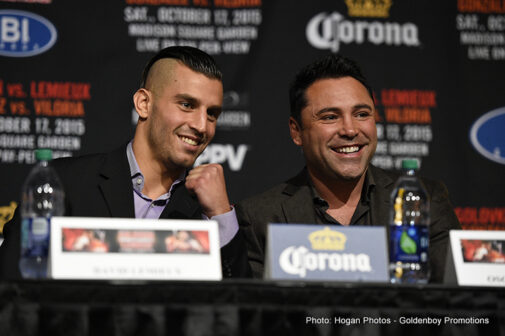 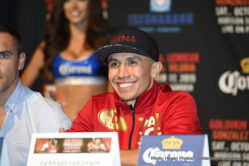 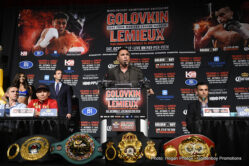 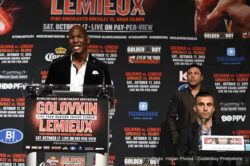 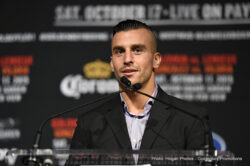 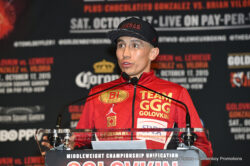 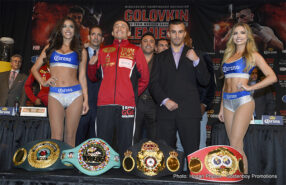 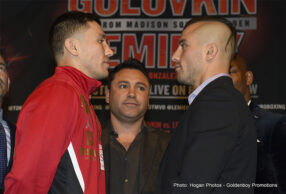 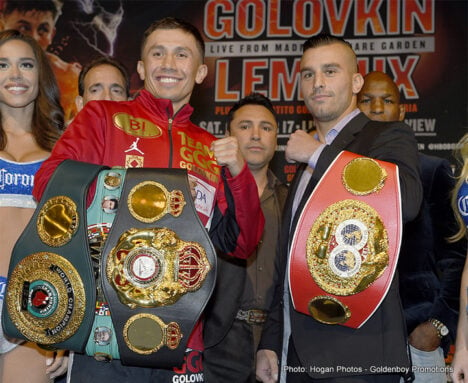 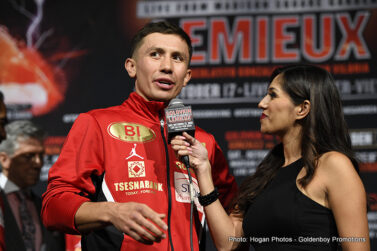 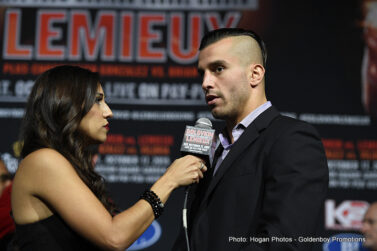 “Goldenboy Promotions has been a perfect partner for this fight, everyone one has been great to work with.

“We are building a global star with GGG, and our goal is to keep promoting him on a global level.

“Abel Sanchez has taken a terrific amateur fighter and made him one of the most efficient and most aggressive professional boxers in the world. He deserves the credit for Gennady’s Mexican Style boxing and had 20 KO’s in a row.”

“What a beautiful country! Only in the USA can you have a fighter from Canada, Kazakhstan, Nicaragua, Cuba, and the Bahamas sell-out the Madison Square Garden, God Bless the USA!

“I have been involved in some of the biggest boxing events in history and have promoted most of them. This feels like a mega event not only because the Madison Square Garden is selling out but you can feel the electricity you can feel the energy.

“This fight is the type that will keep you at the edge of your seat. It’s been a while since we have seen one of these events and we are proud to bring a card from top to bottom that is full of great fights that feature the next generation of great boxers.”

“Let me tell you about the chills that I get being at here at Madison Square Garden presenting the next middleweight unification fight. Unification is very rare, 14 plus years ago we had that. You get a chance to see a that now. We need more of this. We need to work together to out-do the competition.

“Madison Square Garden is where some strange things that happen and I know that personally. In David, we have a guy who can win, but he understands that he needs to be near if not perfect to win.”

Camille Estephan, President of Eye of the Tiger Management:

“This is a fantastic show on the 17th. This is a great week for boxing and this fight will be talked about for ages to come. It will be a war.

“I want to echo the thanks for everyone involved. All the staff who have worked hard on this event; HBO, Mark, and Peter; and the promoters K2 Promotions, GGG Promotions and a special thanking you for Golden Boy Promotions.

“I also want to thank David for being who he is. We are here for a conquest we will go back home with these belts, David is ready.”

“This is a special moment that we have been preparing for over the years. Don’t underestimate us, the proof is in the pudding. We are very confident in David and congratulate Marc Ramsay who has engineered these conquests.”

“We have had a tough but very successful training camp. It was brutal but we reached every goal.

“David raised his boxing to a different level. Everything was perfect, there were no problems and we have no excuses we only have promises of victory.”

“We have been talking about a pay-per-view fight for Golovkin for a number of years. When we first met that was one of the first questions we were asked when Golovkin came on to the network. Finally, you can say that Golovkin is on Pay-Per-View, you have GGG on PPV.

“David Lemieux is a champion in his own right and I want to make sure we have everything covered so we can see David on PPV as well.

“Who will stand on the mountain to carry the sport on his shoulders? Who will be recognized as the best pound-for-pound fighter? Golovkin vs. Lemieux is not only a battle of champions, where each fighter carries a devastating record of 90% knock-out ration each, but it’s the first step to determining the next era of boxing.

“Bernard Hopkins specifically fought here 14 years ago and beat “Tito” Trinidad to become the unified middleweight world champion, and now we have Golovkin and Lemieux continuing that tradition.

“Golovkin and Lemieux may walk in the footsteps of these greats.

“This fight is a can’t miss event. Don’t look away, don’t blink, because you may miss all the action.

“We have had a tremendous sale. A historic pre-sale which has broken records at the Garden. We are almost sold out; we only have a handful of scattered seats that were freed up from production so at this point the show is technically sold out. And on Saturday I will be happy to announce a sell out crowd.

“To commemorate the tremendous sale I would like to congratulate Golovkin and Lemieux with a silver ticket on behalf of Madison Square Garden.”

“We have the top two pound-for-pound fighters fighting on this card – Roman Gonzalez, who leads the co-main event is remarkable for a flyweight. I know he has his press conference tomorrow, but I will say now we are thrilled to welcome him to NYC where he will be facing his toughest opponent in Brian Viloria.

“In the main event we have the making of a classic, two power punchers. Golovkin who is 33-0 with 30 KO’s and Lemieux, who is 34-2 with 31 KO’s are in a sport where a single punch can change the outcome of the whole a fight. This is the kind of fight fans want to see.

“Both fighters have the ability to deliver and also to take a punch. I want to assure you that the New York State Athletic Commission is going to be here to play its role and make sure that the fighter who earns the victory has his hand raised at the end with confidence.”

Golovkin vs. Lemieux is presented by K2 Promotions and Golden Boy Promotions in association with GGG Promotions and Eye of the Tiger Management and is sponsored by Corona Extra, BI Group and Tsesnabank. The event will take place Saturday, October 17 from Madison Square Garden and will be produced and distributed live by HBO Pay-Per-View beginning at 9:00 p.m. ET/6:00 p.m. PT. Doors will open at 7:00 p.m. ET and the first fight begins at 7:05 p.m. ET.