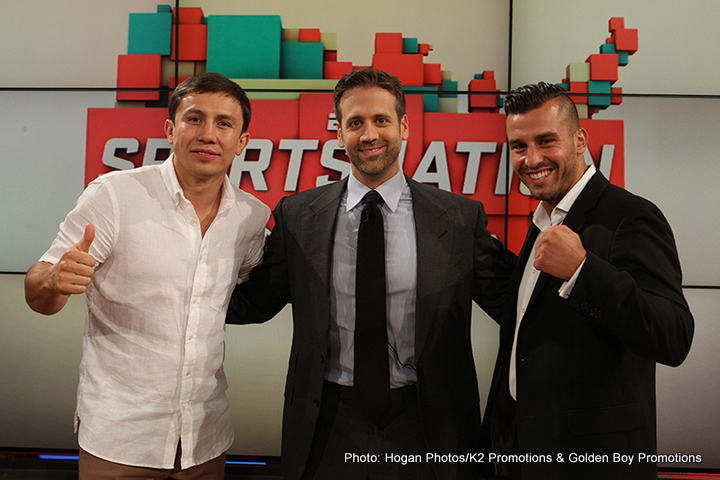 Unbeaten Kazakh knockout artist Gennady Golovkin has big power. Of that I think everybody can agree.

The last fight of his to go the distance was an 8 rounder in 2008 against Amar Amari in Switzerland, and since that time his destructive streak has wreaked havoc on all who stood in his way, bar none.

Obviously a belief exists among some that “he hasn’t fought anybody” yet – anybody of similar dominance or who is operating at elite world class level anyway – at 160 or beyond – although on October 17th he will at least be facing the hardest puncher he’s ever stood in front of in Canada’s IBF middleweight champion David Lemieux.

After getting criticized for being too hitable in May’s fight with the feather fisted Willie Monroe Jr, Golovkin’s trainer Abel Sanchez has warned his man simply struggled to get motivated for the occasion and hasn’t shown everything he has in the tank yet by any stretch – both offensive and defensive technique OR his power.

“Gennady has never really thrown a punch 100 percent in a fight like he does to me on the mitts,” Sanchez told ESPN.com.

“We haven’t seen the best of him. I honestly think he still has yet to be challenged mentally, and that’s what is going to bring it out.”

“I think this is an opportunity for him to be motivated,” he added. “In the Monroe fight, after the second round, I think (Gennady) lost focus a little bit. It wasn’t difficult, so guys at this level, if they don’t have the motivation, they lose a little traction.

“So I think Lemieux, being perceived by everybody as being that kind of fighter, it will keep (Gennady) motivated. This is the guy who can bring it out of him.”

Speaking to those critics who wish to see Golovkin in with an elite level fighter – like the recently retired Carl Froch, Andre Ward or even someone like Floyd Mayweather, (whom it seems they haven’t lost hope of fighting) Sanchez said;

“There’s a saying that this kid (GGG) is not the best defensive fighter, but it’s only because we haven’t had to see that yet.

“He’s not the most destructive fighter (either) yet because we haven’t had the chance. When he fought Stevens, he wanted to punish Stevens. When he fought Rubio, he put him away so quick. So when he fought (Monroe) and (Martin Murray) he wasn’t as interested. And you could see that.

“But a guy with Mayweather’s credentials or even (Lemieux), it just gives him a little more animation, and hopefully he understands that this fight sets up everything that we will do in the future.

“How he does and what he does to Lemieux will determine the paycheck he gets for the next fight.”