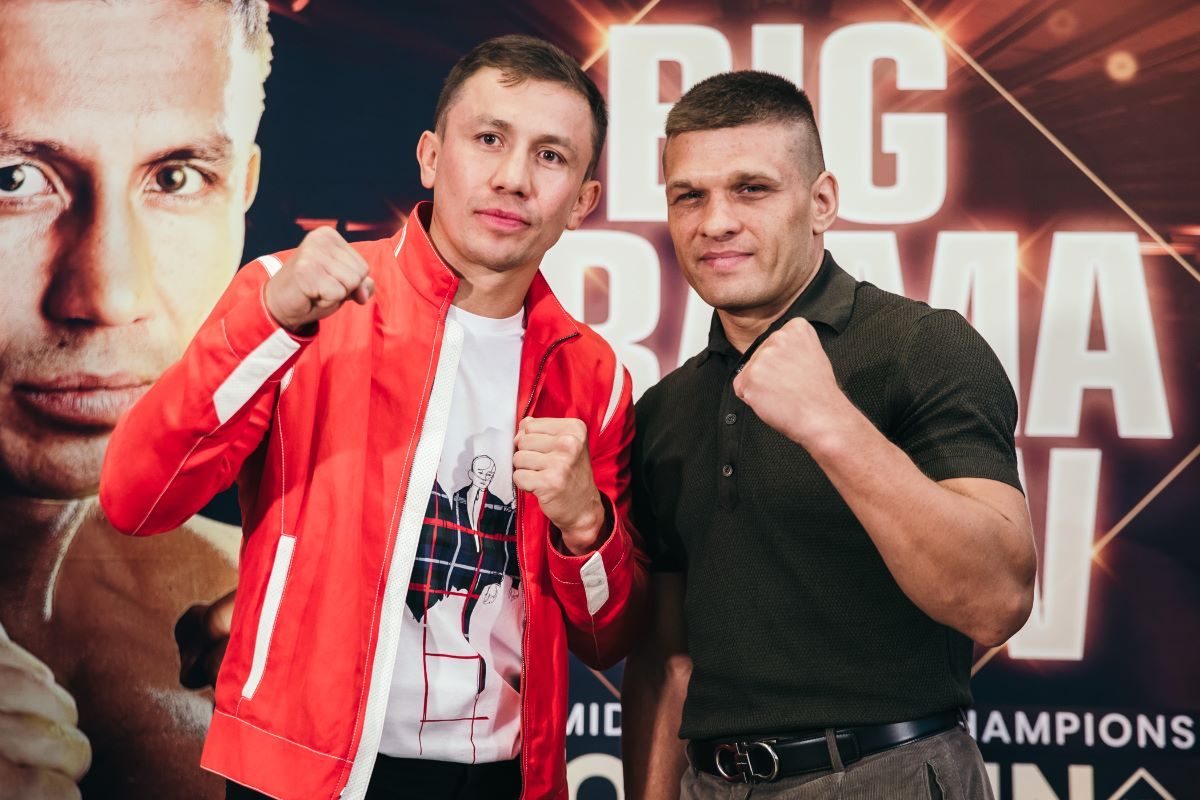 Gennady Golovkin says he views his opponent Sergiy Derevyanchenko as a good test for him on October 5 on DAZN. The two Olympians Golovkin (39-1-1, 35 KOs) and Derevyanchenko (13-1, 10 KOs) will be fighting for the vacant IBF middleweight title.

That belt isn’t as important for GGG as him getting a solid win under his belt to move forward to his fight on DAZN. He hopes a trilogy match against Saul Canelo Alvarez is in store for him in the near future, but he’s prepared to fight other opponents if the Mexican star chooses to avoid him.

The boxing public views Derevyanchenko as a sure thing win for GGG, but that may not be the case. If Golovkin fights Derevyanchenko the same way he did Steve Rolls, he might lose. Golovkin was getting hit a lot by Rolls up until the moment he stopped him in the 4th round last June. There’s no telling what the outcome would have been had Rolls been able to take GGG’s power.

GGG is 100% focused on Derevyanchenko

“Steve Rolls was good opponent. It was good experience from sparring. It wasn’t a long time, just a couple of shots, and that’s it,” said Golovkin to Ring Digital about the shots he took against Rolls. “It’s not too dangerous for me. My opponent [Derevyanchenko] lives in New York. The reason for Madison Square Garden because this is the best place for boxing. I know my opponent is a very good fighter.

What Golovkin means by “crazy style” is if Derevyanchenko opts to slug with him the way he did in his fight against Daniel Jacobs last October. Derevyanchenko took the fight to Jacobs, and lost a controversial 12 round split decision. The fight could have gone the other way in Derevyanchenko’s favor. If he fights that way against GGG, it’s going to leave Golovkin with no choice but to try and knock him out if he wants to win.

“We have a little bit different situation,” said Golovkin about him and Saul Canelo Alvarez. “I’m a promoter. He’s nothing. He’s a fighter. He has a boss. If his boss says, ‘Yes, let’s do it.’ He’s going to. I don’t want to touch this situation, this Golden Boy situation. My position is so good. I have a lot of great names, great champions. I want to,” said GGG.

“I have a great situation, and a great opponent, who take the belt from Canelo,” said Golovkin about Derevyanchenko. “I had a good camp. I have good opponent, beautiful future, and a plan for the future,” said Golovkin.

Golovkin doesn’t like how Canelo has started to order him around by saying that he needs to fight the best guys like him to earn a third fight. GGG thinks Canelo fights who he’s told to by his management.

Golovkin and Derevyanchenko are tailor-made for each other says Banks

“I think they’re both tailor-made for each other,” said Golovkin’s trainer Johnathon Banks to The Ring Digital. “Derevyanchenko is a guy that likes to put pressure, and come forward and fight. So if you want fireworks, what two better fighters do you want to get? I want him to come forward with a rhythm and punch, and throw combinations and let his hands go instead of just punch once. His opponent hits him twice, and he punches one more time.

Golovkin and Derevyanchenko like to slug, and they’re both highly technical. Derevyanchenko’s nickname is “The Technician”, and he likes to use his boxing skills to outsmart his opponents while also going to war with them. This is going to be a tougher fight for GGG than many people think. If Golovkin isn’t 100 percent in this fight, he could lose, and permanently wreck his chances for a third Canelo fight.

Banks is one of the few who liked what they saw from Golovkin in his fight against the 35-year-old Rolls last June. A lot of people thought Golovkin looked slow, rusty and hittable. They think that all those heavy shots that Canelo hit GGG with in their rematch last September took something out of him. In looking at the Golovkin-Rolls fight, the only time Golovkin looked good was when he hurt Rolls and stopped him in round four.

Banks: Joshua has edge against Ruiz in rematch

“I’m not against [Andy] Ruiz at all. I always thought Ruiz was a good fighter,” said Banks. “But when you talk skill by skill, and accomplishment by accomplishments, you have to give it to Joshua. I always thought he [Ruiz] was a good fighter. I always thought so. But in the rematch, I’m still giving the edge to Joshua. He [Joshua] knocked him down in the first fight. The crazy thing to me was, I’m hearing his coach [Rob McCracken] say, ‘Go back to the inside,’ and he went back on the inside. I was telling GGG, ‘why would he tell him this?’ If think about the laws of physics.

If you have someone shorter than you, and with shorter arms than you, and comes to you and wants to fight you. Would you fight them face to face? You would use your reach, because you know that’s something that’s an advantage that they don’t have. The whole point of boxing is to have an advantage over your opponent, so that you can either subdue them, make them quit or you can knock them out. That’s the whole point. So if you don’t use them to your advantage, what’s the point in getting in the ring?” said Banks about Joshua not using his reach against Joshua.

Anthony Joshua’s trainer Rob McCracken looked lost and clueless in his corner during the Andy Ruiz Jr. rematch. From the neck massage McCracken gave Joshua moments before the start of the fight to the point where he was giving him questionable advice after getting dropped twice, it looked like McCracken was out of his element as a coach. It’s interesting that Joshua didn’t figure that out afterwards, and dump McCracken. But he’s chosen to stick it out with his old coach and likely stay with him until the bitter end. If Joshua loses his next fight against Ruiz Jr. on December 7th, it may be over for him.

“That’s what I couldn’t understand,” said Banks about Joshua’s trainer McCracken telling him to fight Ruiz in close. “Why would you tell this man that? That was crazy to me, but whatever. This is going to be a good fight. It’s going to be in Saudi Arabia, and it’s going to be a great fight for the division. I take my hat off to Andy Ruiz, because he didn’t do a Buster Douglas move. That’s what I’m happy about. Buster Douglas did the unthinkable. He went and fought Evander Holyfield next [after beating Mike Tyson]. Are you crazy? And he fought Holyfield for a couple of pennies more than he fought Tyson. Are you kidding me?

Ruiz is getting well paid for the rematch with Joshua. If doesn’t workout for Ruiz, at least he’s getting a good cash out. But even if Ruiz loses, he’s going to get a third fight with Joshua. It’s almost a better deal for Ruiz if Joshua wins the December 7th rematch. If Ruiz beats Joshua, then he probably won’t take the third fight with the talented American.

Only a few more days of training before the Big Drama Show heads to NYC. #GGGDerevyanchenko pic.twitter.com/sJQi9fQDRi