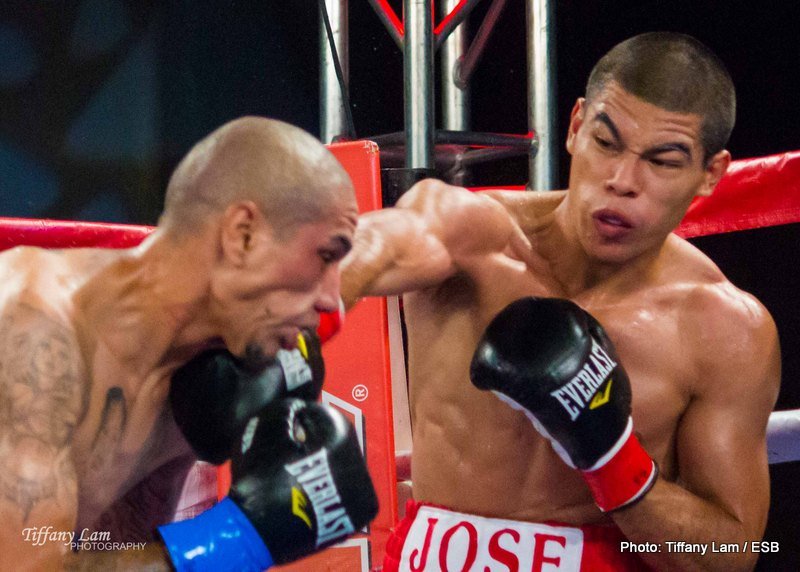 Top Rank and Bash Boxing put on another fun card from their “Fight Night” series tonight in Glendale, California; featuring ten 4-8 round bouts between up and coming prospects. The main event and co-feature were broadcast live on UniMás; with former super bantamweight champ Israel Vasquez doing guest commentary. Results below.

The UniMás main event between two Mexican natives was a bit of a let down after the great opener. Things started slowly as both fighters attempted to feel each other out while not taking any risks. Rodriguez moved forward and Felix Jr. tried to counter. In the third round Rodriguez was bleeding from his nose, no doubt the result from those counter shots. By the fourth round the nose was bleeding badly and appeared broken. No doubt Felix Jr. was the harder puncher, as his shots were doing more damage as the rounds progressed. Rodriguez continued to stalk but seemed late to the punch in every exchange. Felix Jr. always got off first, while moving his feet and remaining defensively responsible.

In the middle of the sixth Rodriguez appeared to break his right arm after landing a punch to his opponent’s hip and retired due to injury. Officially it goes in the books as a TKO victory for Joe Felix Jr. at 1:41 of the sixth round; he improves to 27-1-1 with 22 knockouts. As for Alejandro Rodriguez, he definitely earned his money with a tough night at the office and will probably be out of action for a while.

The co-feature was a face-paced contest with plenty of action. San Antonio native Najera started out applying pressure, while Martyniouk tried to utilize lateral movement and establish his jab early on. The taller Martyniouk, of Antelope California, seemed to be doing the better work through the first half of the fight, while Najera never stopped coming forward and went to the body often. Into the later rounds The Texan’s pressure and body work started paying dividends, as the Martyniouk was slowing down and holding more. However Martyniouk continued to land clean shots, utilizing his superior hand speed.

The fight ended with both men swinging until the final bell. One judge had it 77-75 for Martyniouk, while the other two scored it 79-73 and 78-74 for Najera who, as the house fighter, appeared to benefit from a little home cooking in this writer’s opinion. Either way Najera improves to 9-0 and no doubt learned a lot in his toughest professional fight to date. He’s a fun prospect to watch.