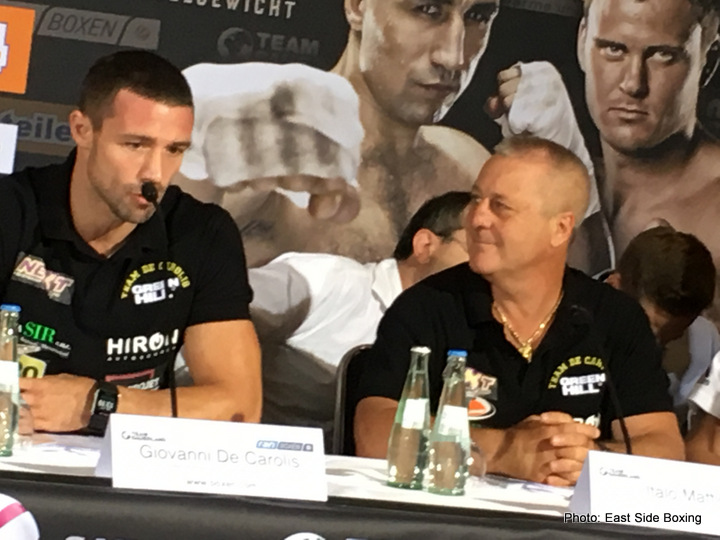 The scoring appeared not in sync with the actual fight that took place, because De Carolis easily won the fight on my scorecards. I could only give the feather-fisted Zeuge one round in the fight, and that was in the 9th. Even in that round, it was a toss up. De Carolis out-punched Zeuge and out-landed him. It was that way all throughout the fight. De Carolis landing the harder shots and Zeuge firing back with very, very weak shots.

If De Carolis fights Zeuge again in Germany, he might want to make sure the fight doesn’t go to the scorecards the second time around.

Overall, I was very impressed with De Carlos. This fighter has got a ton of talent. I can’t say the same thing for Zeuge. He doesn’t have the punching power for the division. He should probably think moving down to middleweight where his lack of power won’t be so much of a handicap. Zeuge just doesn’t have the power to do much in the super middleweight division. Besides being weak, his stamina is incredibly poor. Zeuge looked tired after just six rounds.

I see Zeuge as a six round fighter at best. There’s nothing wrong with that, but at the top level, you’ve got to be able to fight hard for 12 rounds, not just six if you want to win world titles. Further, Zeuge lacks the use of his left hand. I noticed that in previous fights and we saw that flaw highlighted tonight. If Zeuge’s right hand was good enough make up for his lack of the use of his left arm, then it wouldn’t be such a big deal. Unfortunately for Zeuge, he can’t punch with his right hand.