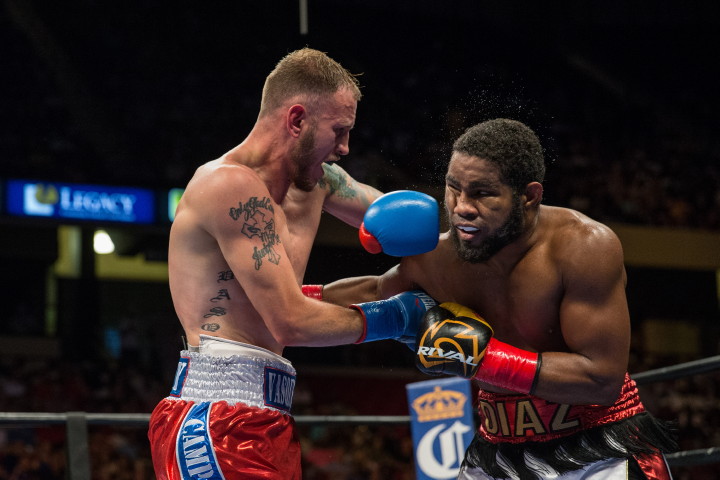 (Photo Credit: Ryan Hafey/Jordan Hardy/Premier Boxing Champions) In a major setback in the career of the previously unbeaten welterweight contender Sammy Vasquez (21-1, 15 KOs), he was beaten tonight by the 5’5″ Felix Diaz (18-1, 8 KOs) by a 10 round unanimous decision at the Legacy Arena in Birmingham, Alabama. The judges scored the fight a 10 round draw initially. However, on a recount of the scores, the judges scored it 96-93, 95-94, and 95-94, for the 32-year-old Diaz.

This is a pretty big upset loss for Vasquez, because he was seen a future opponent for WBC welterweight champion Danny Garcia. Diaz was brought in as a replacement opponent for Vasquez after his originally scheduled opponent Luis Collazo pulled out of the fight with an injury.

Vasquez lost complete control over the fight after the 2nd round, as Diaz was able to move past his jab to pound him with sharp combinations on the inside. Vasquez tried his best to fight Diaz in close, but he didn’t have the leverage or the power on his shots to match the incoming from the hard hitting former Olympic gold medalist. Diaz was smart to stay on top of Vasquez for the last eight rounds to keep him from getting enough space to control the fight with his longer reach.

In round four, Diaz caught Vasquez against the ropes and nailed him with a blistering flurry of power shots to the head. Vasquez’s looked like he was in danger of being knocked out for brief time there. However, he took Diaz’s shots well and made it out of the round in one piece more or less.
Vasquez looked like he was shell-shocked by the 5th round, as he appeared to realize that he was in over his head against Diaz.

What had been thought to be a winnable fight for Vasquez coming into the contest turned out to be one that was unwinnable for him. If not for the surprisingly close scoring, the fight should have been a one-sided affair. There was no way that Vasquez did enough in the last eight rounds for the fight to have been scored the way it was unless taking punishment is a way of winning rounds. The last time I checked, you don’t win rounds by beating up your opponent’s fists with your hair. I could be wrong, but you don’t win rounds by taking a beating, which is what Vasquez clearly took in this fight.

It’s hard to know where Vasquez goes from here. Unless WBC welterweight champion Danny Garcia throws Vasquez a bone by giving him a title shot that he doesn’t deserve, then I don’t see him getting a world title shot anytime soon. I think Vasquez can come back from this loss, but it’ll require nothing but soft match-making until he’s given a title shot via the voluntary defense method. If Vasquez has to fight his way to a mandatory spot, then I don’t see him capable of doing that without him giving an easy path by fighting some poor fringe contender for the No.1 spot. If you put Vasquez in with the likes of Errol Spence, Shawn Porter or even Andre Berto, I see him losing badly to all three of those guys.