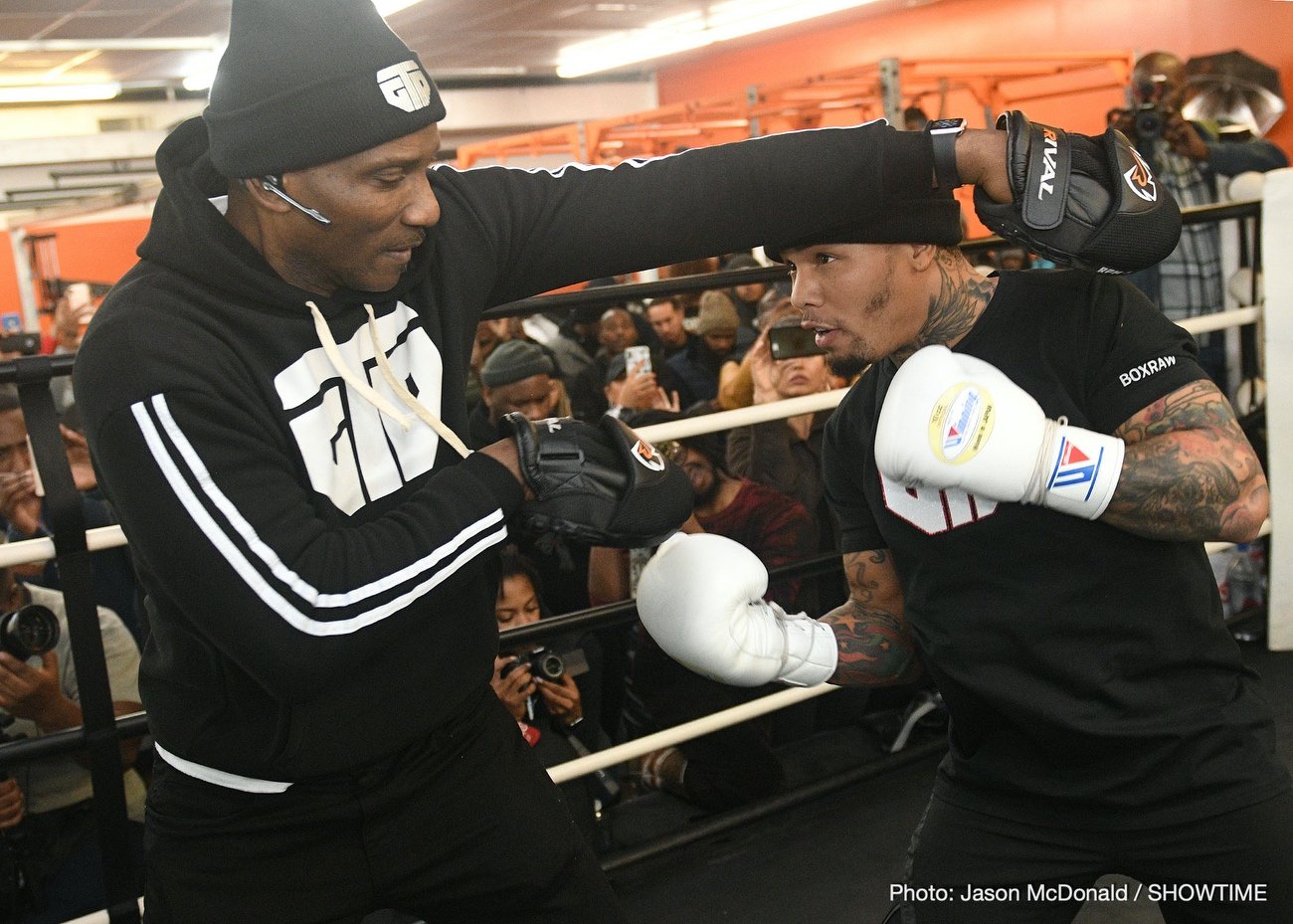 The fighters were joined Tuesday by Mayweather Promotions President and all-time great Floyd Mayweather amongst the participants previewing the event during the virtual press conference.

The event is promoted by Mayweather Promotions, TGB Promotions, GTD Promotions and Santa Cruz Boxing Club. Tickets are on sale now and can be purchased at Ticketmaster.com. The Alamodome has implemented a comprehensive health and safety plan to protect against the spread of the coronavirus.

All fans attending the event will be screened upon entry and are required to wear a mask and follow social distancing guidelines. Tickets will be distributed in seat blocks known as “pods” to maintain distance between groups, not from the same party. For more information, visit Alamodome.com.

Here is what the press conference participants had to say Tuesday:

“I brought my camp to Las Vegas and have trained more than eight weeks for this fight because I know that I’m fighting a top-notch fighter. Leo comes to fight. He brings pressure, and he’s a high-volume puncher.

“I’m having my camp here so I can stay focused on just boxing. And I’m close to my Mayweather team, and I have Floyd in the gym with me more. I’m grateful for having Floyd here to help me tweak things that will help me fight better against Leo.

“We have more than five sparring partners to make sure I’m more than well prepared. My coach Calvin Ford keeps me focused day-to-day so that I’m able to give the fans a great, exciting fight.

“At the end of the day, the fans are going to win. We’re two elite fighters matching up. This could be one of those fights that you’ll always remember. I’m grateful to be in this position, and I’m ready.

“I’m thankful to Leo for stepping up and calling me out. He wants to test himself out. It shows me that he has a lot of heart and he wants to fight the best. The winner of this should be up there in the pound-for-pound rankings. The winner takes it all on October 31.

“Floyd’s been there coaching me through what comes with having my first pay-per-view main event fight. There’s a lot of pressure on me, and you have to live up to fighting on pay-per-view so you can fight on pay-per-view again. When I’m down or anything like that, he’s able to push me, because he’s been there before. There are things that only Floyd can tell me about because he has that experience.

“This camp has been great for me. I’m already on weight. I’ve just been working hard. We’re not worrying about weight. We’re worried about giving Leo Santa Cruz a great fight on October 31.

“Most fighters don’t last to the second half of the fight against me. Jose Pedraza brought pressure against me, and he got stopped in round seven. He can say what he wants, but he has to prove it on October 31.

“I believe I can stay at 130 after this fight, but if there’s a fight worth going to 135, I’ll do that. Right now, I’m just focused on Leo and becoming a pay-per-view star.

“I have a lot left to show in the ring, and Leo is going to bring the best out of me. We have to wait and see. I’ve been working hard every day, sparring bigger and smaller guys. I’m prepared for anything. We know he’s coming to fight. We want to give everyone a great show. It’s going to be a spooky night on Halloween.

“As a professional, you have to be ready no matter what. You have to adapt to whatever comes your way. I’ve been working out for three months every day to prepare for this. I’m more grateful to be in this position than anything. I’m so focused on what’s in front of me, and that’s getting past Leo.

“I can’t say if he can take my power until we get in there. I’m working hard in camp so that I can show my appreciation with a great performance. Come October 31; you definitely won’t want to miss it.”

“I feel really great. This camp has been perfect. I feel strong, and I’m very motivated. My dad and my brothers have been helping me out. It’s really the best camp I’ve had, and I’m in the best shape of my career.

“This is a hard fight. It’s the toughest fight of my career. We’re facing a tough fighter with great skills. I know he’s going to come with everything he has and be at his best.

“I’m determined to go beat ‘Tank’ so I can say that I beat one of the best fighters in the world. I want to give the fans a great fight. This is a big opportunity for me to become a superstar. It’s an opportunity for ‘Tank’ too, so I know we’re both going to go out there and give it ours all for the fans.

“Davis is a strong fighter, especially in the first five rounds. He’s always dangerous, but if I see him gassing out, I’m going to pressure him and break him down. I think that I can frustrate him.

“I believe the winner of this fight is pound-for-pound top 10. Nobody wants to fight ‘Tank’ Davis, and I chose to fight him. If I beat him, I know that everyone will have to say that I’m one of the world’s best fighters.

“I think my future will be at 130 pounds. I want to defend the title and unify, but if there’s a fight that makes sense at 135 pounds, I’ll definitely take it.

“There’s no concern from us about his weight. He’s been training hard, and he looks like he’s in good shape. He fought during Christmas last time, but I know this time he’ll be ready.

“The only concern my team had at the beginning was whether he’d make weight, but that isn’t a concern anymore. We’re working hard in the gym on how to avoid the big shots. We know we have to fight a perfect fight, and that’s what we’re going to do.

“We have to fight from the outside because we know that ‘Tank’ can hit. But I always try to give the fans a great fight, so there’s going to be times I’m brawling with him. We’re going to go back and forth. If I feel like I can take his punches, I’m going to be right in his face.”

“This fight here is about these two young, hungry lions. ‘Tank,’ I’m proud of what you’ve accomplished in a short period of time. Leo, I have to commend you also, because you’ve done great things in this sport. I’m glad that we could take this fight to the Alamodome so we can have some fans. This fight needs to have fans.

“If you can’t make it there, make sure you tune in. We know Leo is going to bring excitement and high volume. ‘Tank’ is always going to bring power and speed. This can’t be anything other than a collision. These guys do it for the fans, they love the fans, and I’m proud to be part of such an event.

“When ‘Tank’ was very young, I told him that at some point he’d be on pay-per-view, and now we’re here. I’ve always been a fan of Leo’s as well. Both fighters deserve this, the fans deserve this, and I want to see these fighters at their best on fight night. Please go out and give the fans what they want to see.

Tank is ready for PPV

“I know ‘Tank’ is ready for pay-per-view because his fan base is really growing. The demographic that follows him is getting bigger. With Leo being popular on the West Coast and in Texas, he’ll bring a huge following. This fight can only be on pay-per-view, in my opinion.

“In the gym, Calvin Ford and I work hand in hand. I’m just there to give pointers and help ‘Tank’ understand how pay-per-view works. If a fighter is in a gym working hard all day, sometimes he doesn’t want to do what you have to do that is part of being on pay-per-view. When we invest in a fight like this, we want these fighters to give 100%. I’m proud of both competitors for what they’ve done so far.

“I believe in ‘Tank.’ I’ve believed in him ever since he was a young kid. He’s still a kid in my eyes, but he’s a young man now. I told him it was going to come fast and when it comes, to be ready.

“You haven’t seen the best Gervonta Davis yet. He had so many different looks in training. And he had big guys, small guys, combination punchers, pressure fighters. He was boxing everything from middleweights to featherweights. All of this is going to play a big part in his career.”

“This is a terrific fight. It’s a clash of styles. Leo is a non-stop puncher. He’s relentless and comes forward. ‘Tank’ has the power, the youth, and the speed. It’s two young fighters who want to give the fans the best out performances of their careers.

“Leo really pushed for this fight. Obviously, he sees something in ‘Tank’ that he feels he can take advantage of. It makes it a really fascinating matchup.

“The timing couldn’t be better for pay-per-view. These two young guys are ready. ‘Tank’ has become a huge attraction, selling out fights in the U.K., on the East Coast, down south, and in California. We’re excited to bring him to Texas on October 31.”

“It was important for Floyd, Leonard, and all of us involved in this fight to have fans at an event of this magnitude.

“We started looking for where we could go, and It’s difficult with so many sports going on right now, but the Alamodome was open because we can set it up with social distancing throughout the arena. It was the right fit for a fight like this. We’re excited to come back to a great fight town in San Antonio.

“I’ve always loved the Alamodome. We can make this a great night in a great fight town. I’m so happy we can bring this to the fans in San Antonio.”

“This matchup between Tank Davis and Leo Santa Cruz is one of the most anticipated and exciting matchups of the year. We have power and speed and athleticism versus experience and pressure fighting. We have a boxer with one of the sport’s highest knockout ratings versus a fighter who is one of the busiest, highest pressure fighters in the sport. I give credit to both Tank and Leo for taking this fight and for taking big risks.

“We are thrilled with the undercard. We’ve seen Mario Barrios fight on SHOWTIME before, and he will be defending his title against the very entertaining Ryan Karl. We’ve seen Regis Prograis mature through ShoBox, and we’re thrilled to have him back, and he has his hands full with fellow ShoBox fighter Juan Heraldez. The opener between Isaac Cruz and Diego Magdaleno is another fight fans’ fight.”