George Kambosos Jr. says Teofimo Lopez Sr. came at him during Tuesday’s media workout and potentially tried to attack him. Kambosos’ dad intervened and appeared to push Teofimo Sr. away before things could get out of hang.

It’s difficult to know why Teofimo Sr. was so upset today because it’s not as if his son is in any real danger against Kambosos.

Teofimo Sr. was furious about the incident and told his son Teo that he wants him to knock out Kambosos (19-0, 10 KOs) within three rounds on Saturday night in their main event fight on DAZN at Madison Square Garden in New York.

It’s possible we could see an early stoppage by Teofimo because he’s bigger, stronger, faster, and more talented fighter of the two.

Kambosos is getting a title shot against IBF/WBA/WBO lightweight champion Teofimo (16-0, 12 KOs) largely because the International Boxing Federation made it easy for him to earn the mandatory spot by fighting Lee Selby instead of one of the good contenders.

Kambosos says Teofimo Sr. got put in his place

“We came here like the true professionals that we are. We come here for the fans, the media, and the reporters that have been really patient throughout the months and months of rollercoaster road,” said George Kambosos Jr. to iFL TV on the confrontation with Teofimo Sr.

“I started doing my thing, and Lopez Sr. wanted to come up and carry on and cross the line to our area, and he tried to possibly attack me and attack my team,” Kambosos Jr. continued.

“Well, my father put him in his place real quick, and we all saw it. It was never personal for me. I’d already forgotten about that thing until you brought it up. That doesn’t bother me. I love confrontation.

“We’re cool, calm, and collected. Now let them dwell on every bit of the problem that they have. Everything I do, I feel I do better than he does,” said Kambosos when asked why he believes he’ll win.

“There’s the amount of work I put into this. The blood, sweat, and tears, and the willpower, the hard and the hunger that I have from the heart. I just want a war, and I’m prepared to do whatever I have to do to win this fight.

“I believe in my boxing abilities and what I bring to the table. I will win this fight. It’s never personal for me,” said Kambosos.

“Whatever make-believe stories he has in his head and whatever lies that they’ve told him about something. He wasn’t there where he was getting upset and personal,” said Kambosos.

George is going overboard by saying Teofimo Sr. was put in his place by his dad. I saw a shove, and that was about it.

“This is business for me. It’s never personal, even that little situation. It doesn’t bother me,” said Kambosos.

“I’m cool, calm and collected, and ready to do a job. This is huge for Australian boxing. This means a lot to our country. I’m ready to represent and raise their flag higher than ever.

“Very basic, I think he’s a 1-1-2 kind of guy,” said Kambosos when asked to assess Teofimo’s talent. “He makes a lot of mistakes.

Yeah, he took out a few guys that were nowhere near his class, but when he struggled up against the better guys, Nakatani. That was a very close fight. He was lucky to win that fight.

“Yeah, he caught Commey. I was there on the undercard and had a good win as well. He got him with a good shot. But the Lomachenko fight, a one-handed guy, a guy he doesn’t want to go near [for a rematch],” Kambosos said.

Teofimo has a lot of power and speed, so he doesn’t need to be super clever the way less powerful fighters are.

“Everything I bring to the table, it’s going to be better than him, and I’m fully ready. I’m fully prepared. I’ve had a great run. Mickey Bey here in New York. Lee Selby, in his hometown. He’s a very, very class fighter, and now Lopez.

“Victory by any means,” said Kambosos when asked if he’ll stop Teofimo on Saturday night. “It could be a stoppage. It could be a nice beautiful out-cold shot to put him to sleep like he’d been put to sleep in sparring many times, and I believe he’s got a glass jaw.

“I’m ready for war, but I’m prepared for whatever. Tune-in DAZN. Doing a hell of a job, Matchroom, and we’re ready for war and to bring back boxing for the fans,” said Kambosos.

The only way Kambosos can win this fight is by outboxing Teofimo over rounds, but that’s not going to be easy. 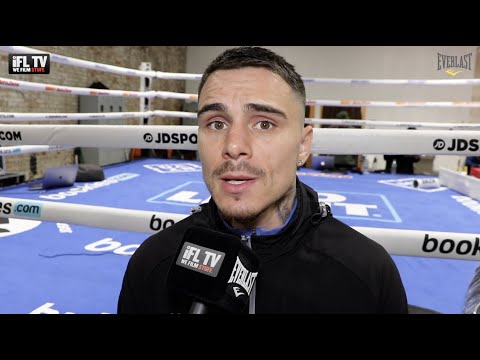