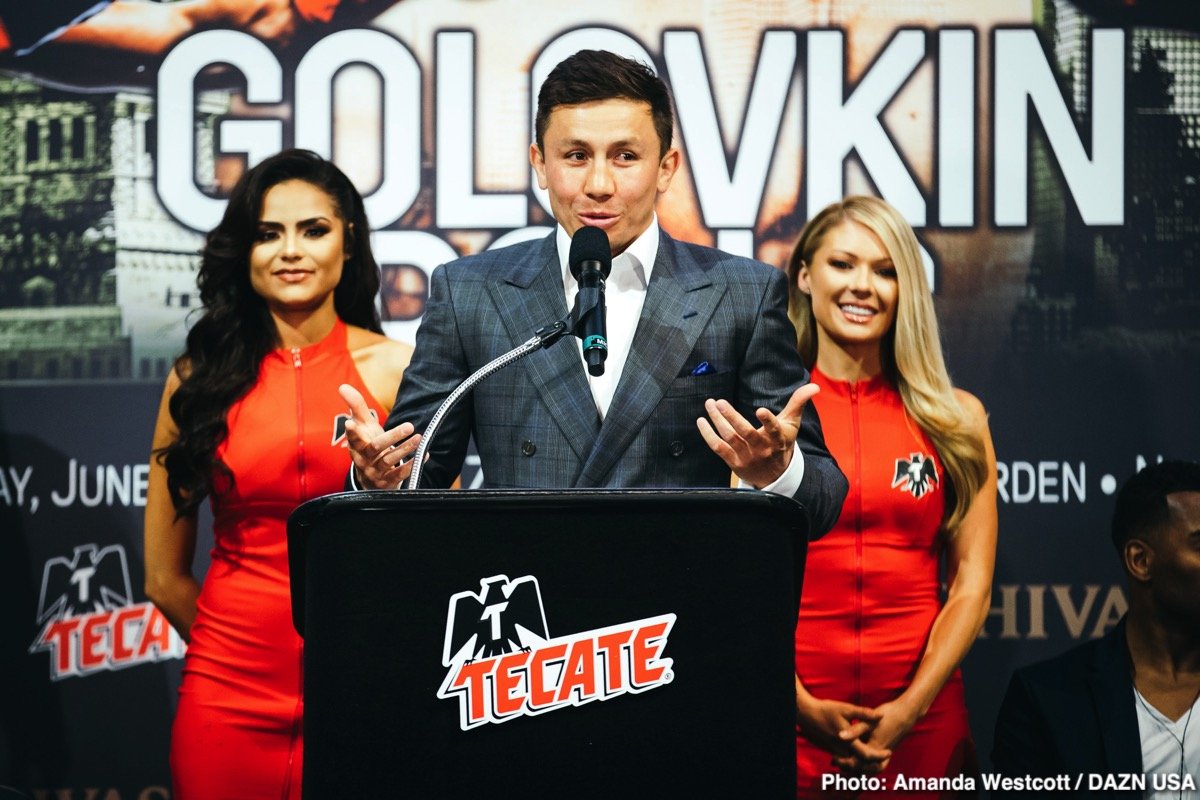 Boxing’s pound-for-pound superstar attraction GENNADY “GGG” GOLOVKIN and undefeated Top-10 world-rated contender STEVE ROLLS concluded their coast-to-coast media tour with a Los Angeles press conference today at The Conga Room at LA LIVE. Golovkin (38-1-1, 34 KOs), from Karaganda, Kazakhstan, formally announced to media that he is bringing his Big Drama Show back to the “Mecca of Boxing” on Saturday, June 8, in a 12-round rumble with Rolls (19-0, 10 KOs), who hails from Toronto. The fight will be contested at a maximum weight of 164 lbs. and marks GGG’s debut on DAZN, after signing a six-fight global partnership in March.

“First of all, I want to say thank you to God for this chance. I am very happy right now. I feel like I am back. Thank you to DAZN, which is the biggest platform for boxing and for fans. Thank you to my family and everyone involved. This is exactly what I need. I respect Steve and his whole team and I appreciate them for taking this fight. If you can’t make it to Madison Square Garden on June 8, watch on DAZN because I will bring a show.”

On how he feels to be back in the ring after his network decision: “I feel great, like I am 15 years old with a dream. I am hungry. I know what Steve Rolls feels like right now, with that opportunity. I have that, I want to go back to that mindset. This is my first fight in this deal and it makes me feel like a young man again.”

On the past few months: “I think I learned a lot. We opened a promotional company and as the head of a company and an active athlete, it was the best decision to come to DAZN for the future. We are excited to announce a lot of things soon.”

On competing in a higher weight class in the future: “I feel very comfortable at my weight class now. But would I move up for a big name or a big fight? Of course.”

On his legacy: “I feel very comfortable right now. I have six fights with DAZN now and I am excited to face Steve Rolls. The big fights are important to me and titles don’t matter to me as much as being in the biggest fights.”

“We are very excited about the return of Gennady Golovkin on June 8. We have to give a lot of credit to Steve Rolls. He took this fight without hesitation. Steve was part of the Canadian national team and part of Emanuel Steward’s gym. Emanuel had an eye for talent and when I heard that Steve was with him, it sold it for me. I knew he belonged here. Steve and his whole team are consummate professionals. They are professionals and they are going to fight under the brightest lights at Madison Square Garden, so they understand how big the moment is. He is Steve Rolls today but he could be Steve Rolls, the guy who beat Gennady Golovkin.”

“I know there’re a lot of opinions on who won the two fights with Canelo – we certainly have our opinion, and that he’s still undefeated and still should be considered the best middleweight in the world, but we consider him the people’s champion. This is really the return of the people’s champion. When you have a fighter who’s undefeated like Steve Rolls, hungry who can take everything that GGG earned in his career – these are the most dangerous kinds of fights that GGG can be involved in at this time. Obviously there’s a potential third fight with Canelo down the road, but if GGG overlooks someone like Steve, it’s one of those classic situations that could the turn the apple cart.”

“GGG has sold out MSG twice, The Forum twice. He sold out T-Mobile Arena twice. And he sold out The O2 Arena. He is truly a global ambassador for the sport. In my mind, he is still best middleweight in the world.”

On whether Canelo and Golovkin need to fight on the traditional Mexican holiday weekends: “No matter which day that Gennady Golovkin and Canelo Alvarez fight again, it will be a Mexican holiday. Regardless of the date on the calendar.”

“I want to thank GGG promotions, DiBella and DAZN for this opportunity. I know a lot of you are unfamiliar with me and there have been questions about GGG’s choice of opponent. But I worked so hard to get here. I have been in fights that fell through, fights that haven’t happened for this or that. But I think if I had some of those opportunities, you would know my name already. This is going to be a much better fight than people are expecting. I have a lot of respect for Gennady. But at the end of the day, he is a man. And when you get two men in the ring, anything can happen. I can’t wait until June 8 and I look forward to proving it then.”

On what he sees in Golovkin: “GGG is a tremendous champ. Very strong and aggressive, he can do it all. He can box, he can jab. He can cut off the ring very well. He is an excellent fighter.”

On how big this moment is in his life: “This is just one of those things I am still trying to take in. A lot of thoughts going through my head but I have to stay composed and focus. I am going to put everything into this fight. I can’t let all of those thoughts of the future distract me right now. I just need to prepare and get ready to take on Gennady Golovkin.”

On Golovkin’s power and how his experience has prepared him for this moment: “I have been in there with guys who hit hard. As long as I am 100% physically and mentally, I will be fine. I have gone rounds with cruiserweights and heavyweights, been in there with David Lemieux, Andy Lee, Lucian Bute and Adonis Stevenson. They have helped me prepare for this position and this opportunity. This will be my first 12-rounder as a professional but that’s only on paper. I grind in the gym and will have no problem going the distance.”

On what this fight means to him as a Canadian: “When you think about boxing in Canada, you think about Quebec. Being from Ontario, we have flown under the radar. But I will show how big boxing is in Canada. There is talent out there and we don’t get a ton of shine. I am looking forward to giving them some light and give others the stage to see what Canadian fighters are capable of.”

“This is a huge moment for our business and continued growth here in this market. Boxing is absolutely central to what we’re trying to do in North America, and to be successful we need the top names in the sport. We’re lucky and proud to have already brought on the platform Anthony Joshua, Canelo Alvarez, and with the addition of Gennady Golovkin, I strongly believe we have the three biggest names in the sport attached to our platform – committing their futures to us as we grow our business here in America and around the world with boxing at the core of that.”

“This fight is part of a tremendous spring and summer schedule for our business here in North America. We’re about ten days away from the biggest fight with Canelo Alvarez vs. Daniel Jacobs in Las Vegas, May 4 on Cinco De Mayo Weekend, that’s quickly followed by Anthony Joshua’s debut in the U.S. at MSG, and the following week back at MSG with GGG and Steve Rolls. We’re tremendously excited about all that. I think the value we’re bringing to boxing fans and fight fans in the U.S. is tremendous and unquestionably valuable across our monthly option of $19.99 and our $99.99 monthly pass – giving fans more than 100 fight nights a year for the cost of one PPV under the traditional model.”