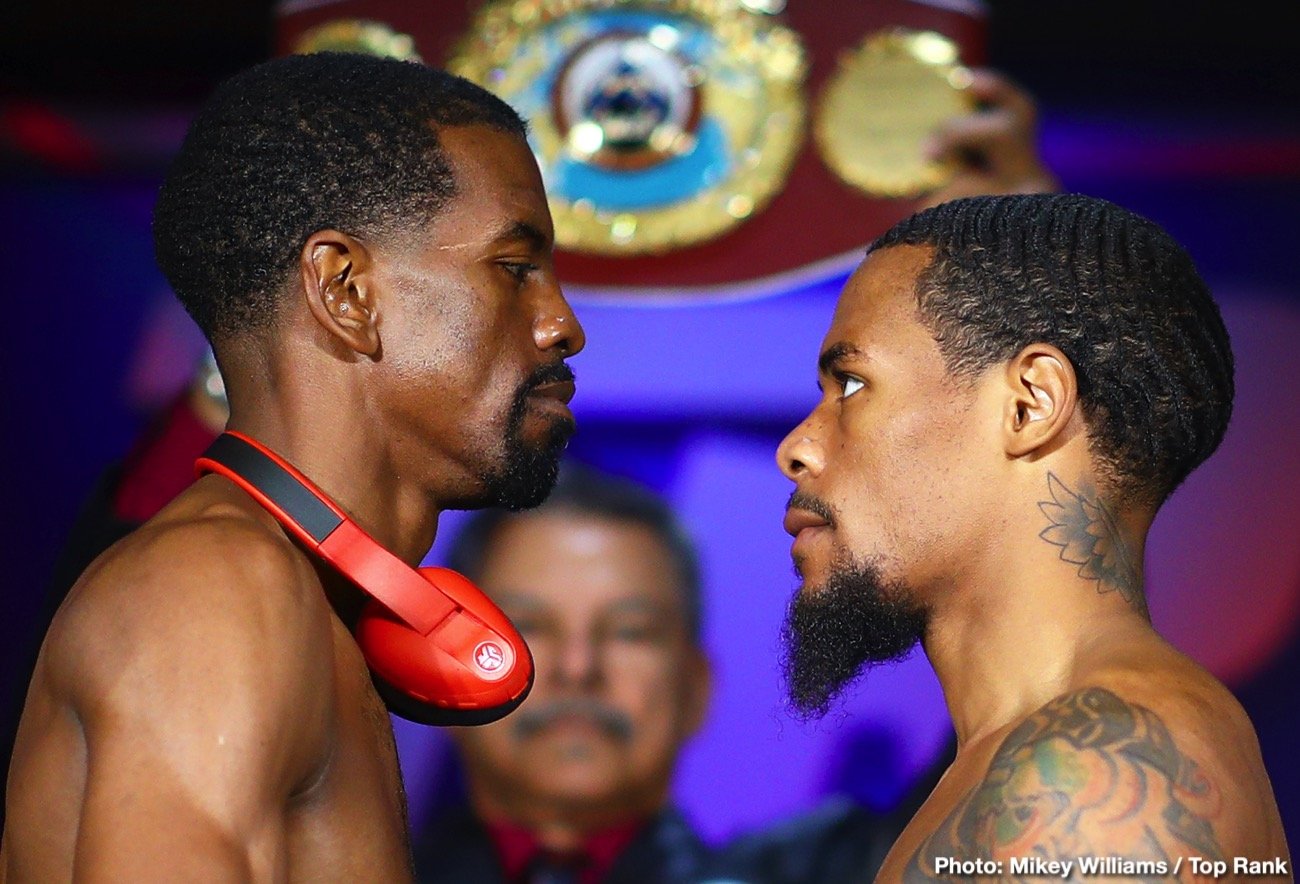 This Saturday night live on ESPN+, super featherweight title holder Jamel Herring defends his WBO belt against Lamont Roach Jr. The event takes place in Fresno, California timed perfectly for Herring, a former Marine, on Veterans Day weekend. On paper and at the betting windows this matchup is even and will likely be decided in the 2nd half of the fight.

Jamel’s story outside of the ring is not all that different from many fighters as far as facing adversity. The difference is Herring faced the ultimate challenge serving not one but two tours of duty in Iraq. Inside the ring Herring made his dream come true by ripping away Masayuki Ito’s 130-pound belt in May as a clear underdog. When Herring was a guest on the Rope-A-Dope Radio Podcast this host admitted to picking Ito. The humble yet confident Herring responded with ‘you weren’t the only one, at least you admit it”.

The pressure Ito brought to the table seemed all too familiar to the style that gave Jamel fits. Denis Shafikov and to a lesser extent Ladarius Miller were able to get inside on Herring which flustered him. Herring had moments with Ito that seemed reminiscent of the Shafikov fight but this time around Jamel was able to adjust and push thru to victory. It should be noted Jamel wasn’t always kept in the loop under previous management which hurt Herring as far as preparation and staying active as a boxer. He had to prove himself to get signed by Top Rank and then beat Ito in order to become more of a priority from the handlers. Of late Herring has been kept busy fighting and given future dates with plans laid out to him much earlier.

During fight week he found time to answer a few questions via text message as Saturday night approaches. Herring spoke of his work with one of the best pound for pound boxers on the planet in Terrence Crawford. Not just working side by side in the gym, Jamel sparred with ‘Bud’ which he feels kept him busy and feeling sharp. Another bonus heading into his first defense was the time spent with strength coach Jamie Belt. Herring texted “Belt has added more to my physique, so I really feel stronger than my last outing and overall my team has prepared me well for this camp.” He closed with his mindset being ready for the best version of Lamont Roach Jr.

In walks Lamont Roach Jr. with an opportunity of a lifetime to become a champ. Roach Jr. has shown some promise on his way up the totem pole as a prospect. The proof will ultimately be in the pudding in the main event because Roach’s resume is full of mediocre to no-hopers all the way up until to 2018. In May Lamont scored a decent win over former title challenger Jonathan Oquendo. The other recognizable name is a draw to Orlando Cruz. To be fair it’s not like Herring had secured many impressive victories prior to upending Ito.

Lamont is a patient fighter that looks to be efficient with his punch rate in the early goings. Roach tends to throw a lead left hooks or straight right hands as he steps to his opponents. His jab is of the pawing variety probably too much. Lamont’s defense is fairly average, left hooks, jabs to the stomach, and getting starched with right hands is easy to pick up while watching his fight with Orlando Cruz. Lamont does attack the body with whipping rights but has a habit of standing in front too long as he finds a target for one clean land at a time.

The slight favorite in Jamel Herring is good at fighting at range especially versus a style like Roach’s. Herring moves laterally and uses a sharp pivot while he pumps a stiff jab. A quality jab that Jamel faints with and throws a sneaky quick right hand behind it. Herring is more responsible with his guard on defense whereas Lamont keeps his left hand low. As a southpaw, Herring will likely be able place his right foot on the outside of the orthodox left foot of Roach and if that doesn’t work Jamel will step on his foot.

The key to the victory for Herring is keeping Roach on the outside and tentative. When Lamont leaps in, look for Jamel to counter punch Roach all in one motion by spinning away out of incoming damage. Lamont will need to be a busier fighter instead of waiting to land on good shot. In the end this boxing junkie doesn’t believe Roach can get inside routinely enough to win at l7 rounds. A slow start will begin to open up a bit but this won’t necessarily be a shootout type fight.

My Official Prediction is Jamel Herring by Majority-Decision.