Floyd Mayweather Jr. took a shot at his critics on Friday, saying that they’re jealous of him that he’s able to “milk the game” in retirement, making millions with mental faculties still intact after a long successful career in boxing.

The critics have been laughing at the news of the 45-year-old Mayweather returning to the ring next month to face a little-known ex-fighter named Don Moore in an exhibition match on May 14th on a helipad at the Burj Al Arab Hotel in Dubai.

It’s not that fans are jealous of Mayweather. They feel that he had his time, and he should go away and not choose to peddle his exhibition matches to the public, which unfortunately have shown to be entertaining.

Mayweather’s last exhibition was a boring last year on June 6th against YouTuber Logan Paul at Miami Gardens in Florida. Afterward, many boxing fans were angry at having wasted their money on the fight, which they thought would be an entertaining one.

Even hardcore boxing fans have never heard of ‘Dangerous’ Don Moore (18-0-1, 12 KOs), and it’s easy to see why. His five-year professional career consists of wins over bottom dwellers with poor records.

The timing of the announcement for Mayweather’s exhibition match against Moore came on the same day as Gervonta ‘Tank’ Davis’ kickoff press conference for his May 28th title defense against Rolando ‘Rolly’ Romero on Showtime PPV.

Was it intentional on Mayweather’s part to have his exhibition match against Moore announced on the same day as Tank’s fight with Rolly was accidental?

“Dubai, pick up a couple of dollars. You know, they are upset,” said Floyd Mayweather Jr. about his critics being annoyed by his recent announcement of his exhibition match against Don Moore.

“See, they’re upset because I’m able to milk the game, I’m smart, I kept all my faculties, made a lot of smart investments, so you don’t win.

“Great people like Warren Buffet, Bill Gates, the Waltons, the people that own Walmart, Walgreens, when they’re getting money in their 50s, 60s, their 70s, 80s, and even 90s, it’s okay.

“A young kid like myself from the inner city, from the Ghetto, I worked my way to the top, I was able to leave boxing on my own terms, keep all my faculties and a lot of my money.

“So, they’re upset that I’m able to continue to go out there and make 40, 50, and 60 million outside of the ring. You can’t get mad. Yo, listen, this is what God wanted. All I’m doing is benefiting from the fruits of my labor,” said Mayweather. 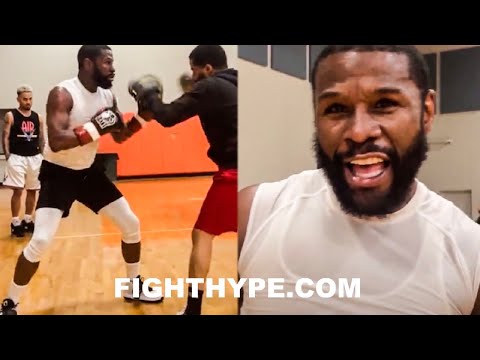