Ask any older fight fan, one who can remember the days of the 15 round world title fights and when there was one world champion at each weight class, and they will tell you the biggest problem with the sport today, aside from the snuffing out of 15 rounders and the existence of too many weight divisions (there used to be just eight after all), is that there are just too many world titles out there that are up for grabs.

Today, a fight fan must make sense of “interim champions,” of “super champions,” of something called a “champion emeritus,” and we also have “regular champions,” and, the latest addition to the club, a “franchise champion.” Is there any wonder even a hardcore boxing fan is confused at times and loses track over just who is a real and genuine world champion? Well, enough is enough says none other than Floyd Mayweather, a man who scooped up a whole load of world titles during his great career. 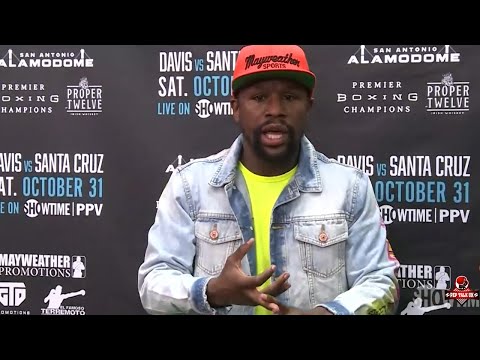 Speaking yesterday during his fighter Gervonta Davis’ open workout ahead of his big fight with Leo Santa Cruz, Mayweather said the sport of boxing needs “cleaning up,” and the way to do it is to get rid of the proliferation of belts. Mayweather even went as far as to take some of the blame, stating how it doesn’t matter “if it’s Top Rank, if it’s Golden Boy, if it’s Mayweather Promotions if it’s PBC – there’s too many champions in the sport of boxing right now.”

No doubt everyone will agree with what Floyd had to say. Mayweather went on to give what he feels is the reason there are so many belts – sanctioning fees.

“There’s too many champions in the sport of boxing right now,” Mayweather said, the video courtesy of Showtime. “Too many champions. It’s no such thing as a super champion, not at all. And I’m not taking anything away from no fighter. It’s too many belts. And the reason why it’s too [many], let me tell people what’s going on in the sport of boxing, why there are so many different titles and so many different belts. People don’t know you have to pay, for every belt you win, there’s a sanctioning fee. If a fighter has just the regular belt, he has to pay a sanctioning fee. If a fighter is a super champion, he has to pay a sanctioning fee. This is not good for the sport of boxing. Every fighter is a champion now. Belts now is like a fighter winning an amateur trophy.”

There is, to repeat, no argument with what Mayweather is saying – but what can be done about it? This is the big question. We all know there are far, far, far too many belts out there, and money is the big reason (how much dough do all those sanctioning fees pull in!). But is this likely to change any time soon, if ever? When the biggest name in boxing (still) says there are too many belts out there and that the sport of boxing “needs cleaning up,” we know there is a big problem.

But the solution to the problem seems to be out of reach. There is just no way the governing bodies will ever agree to work together, thus eliminating all the different belts. It used to be so simple back in the sport’s genuine glory days: one champ, one belt, one face at each weight class. Everybody knew who the heavyweight champion was, and so on.

Mayweather says he is tired of all the belts that are out there, of seeing how “everybody got a championship belt now,” but Floyd, like the rest of us, has no obvious solution to the problem that so irks him.

“We gotta clean this sport of boxing up,” Floyd said. “This shit, this doesn’t look good.”