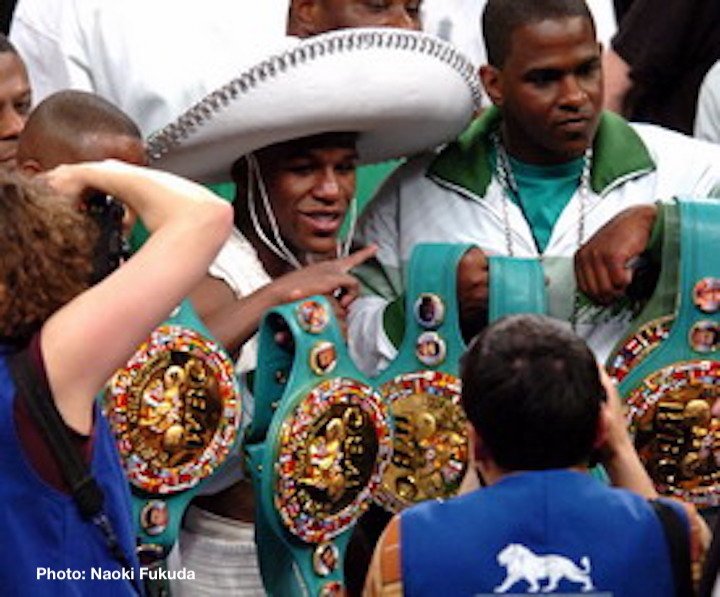 Floyd Mayweather spoke with his favorite boxing web site, FightHype, again recently (the video uploaded today) and the main topic of conversation was a list of “The Best Welterweights,” that Mayweather was sent by a friend of his. The exact list is undetermined – and there have, as you know, been a lot of ‘best this,’ and ‘greatest that’ lists coming out recently, with very little live boxing action to keep fans occupied – but “Money” disagrees with Sugar Ray Leonard’s ranking at the top of the list.

Mayweather of course calls himself, “T.B.E,” and the 50-0 former champ disagrees with any fighter being ranked above him, regardless of weight. But Floyd fought his biggest fights, his enormous pay-per-view fights at welterweight and it’s arguable that 147 was his best weight. In any case, Mayweather doesn’t like Leonard being ranked above him, and he’s not too happy about Manny Pacquiao being ranked at number three in the list he was recently sent.

“It was crazy, someone sent me something about ‘The Best Welterweights.’ They had Sugar Ray Leonard number one,” Floyd told FightHype. “As I said before, he was the guy that paved the way for myself. But how can you have a guy ranked number one when his first loss was to a lightweight, Roberto Duran?

“And then they also talked about me facing [Juan Manuel] Marquez, which was at a catch-weight of 144. But this same guy, Marquez, knocked out their number three ranked welterweight – because they had [Manny] Pacquiao number three.

“He got knocked out by Juan Manuel Marquez. They were trying to say that basically he [Marquez] was too small for me. But he wasn’t too small for Pacquiao. It’s crazy how all these ratings go nowadays.”

Mayweather went on to say how “these so-called boxing experts gotta really, really do your homework before you speak on certain things about boxing.”

But who has an issue, other than Floyd, with Sugar Ray being ranked above Mayweather? Not here, no way. Of course, when it comes to who should be at the top of any list calling itself ‘The Greatest Welterweights,’ that man in the incomparable Ray Robinson – the original and by far the best Sugar. All lists if this kind is of course subjective, and Mayweather sure has his supporters.

But in the opinion of many fans (this one included), there are more than a couple of 147-pound greats fully deserving to be ranked above Floyd Mayweather in a Top-10 best-ever (the two Sugars, Henry Armstrong and Tommy Hearns to actually name four). But this is only an opinion. How about you?