Tonight in Jeddah, Filip Hrgovic overcame by far the toughest test of his pro career in winning a gruelling and close 12 round unanimous decision over Zhilei Zhang in their IBF heavyweight eliminator. Hrgovic, who went down in the opening round, this from a right hand that hit him in the back of the head, looked exhausted at times during the engrossing, somewhat odd encounter. Zhang was also running on empty at the end yet the towering southpaw felt he had done enough. Instead, scores were 115-112, 115-112, 114-113, all for Hrgovic. 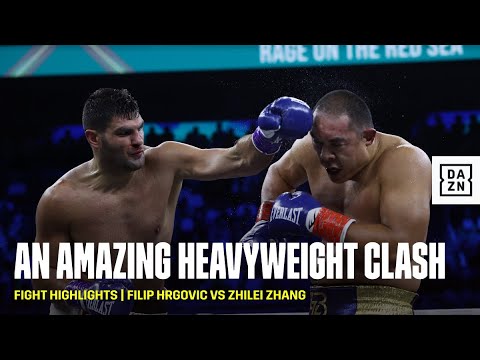 Zhang of China, eight years the older man at 38, scored the knockdown in the opening session, and Hrgovic, though he was up quickly, took a straight left hand to the head from his southpaw rival and he appeared to be uncomfortable. From here on in, it was a slugfest, at times one that appeared to be being fought in slow-motion. Zhang would suddenly open up in a burst of shots, the slower man having big moments of success.

There was a clash of heads right at the start of the third round, with Hrgovic left bleeding from the high up on the left side of his head, with Zhang picking up some damage to his forehead. By the 5th, both guys were feeling the pace. Hrgovic had an odd habit of walking away from Zhang, seemingly in a dream world. The canvas was soaked with a combo of water and sweat by the later rounds and Zhang complained about it. Zhang actually went down heavily from a slip in round 11, this due to the soaked canvas.

Both men were running on empty as the final bell loomed and it looked to be anybody’s fight. In the end, Hrgovic did just a little more work, his faster hands scoring more points. Still, as a showcase, as a statement of intent, Hrgovic did not do well. Basing things on today’s often listless performance, Hrgovic will not have convinced many fans he has the beating of an Oleksandr Usyk, an Anthony Joshua, or a Tyson Fury. Again, an odd showing from Hrgovic, who looked all gone at times, only to then come fighting back. Hrgovic took far too many shots tonight, that’s for sure.