Nonito Donaire says he would like to take on the winner of the trilogy match between WBA/WBC super flyweight champion Juan Francisco Estrada and Roman ‘Chocolatito’ Gonzalez if he successfully defeats Reymarkt Gaballo this Saturday night.

Donaire says he can make the 115-lb limit to face the winner of the Estrada vs. Gonzalez 3 fight, as he was 116 for his recent fight against Naoya Inoue.

Before going down to 115 to challenge the winner of the Estrada vs. Chocolatito 3 match, Donaire says he wants to face IBF/WBA bantamweight champion Naoya ‘Monster’ Inoue so that he can avenge his loss to him from November 2019.

Donaire, 39, feels that Inoue is the #1 fighter in the 118-lb division, and he’d like to defeat him to prove that he’s the best in the weight class.

Of course, even if Donaire does avenge his loss to the devastating puncher Inoue, he would still need to beat WBO bantamweight champion John Riel Casimero to become the undisputed champion.

Donaire (41-6, 27 KOs) will be making his first defense of his WBC bantamweight title against interim champion Reymart Gaballo (24-0, 20 KOs) this Saturday night on December 11th on Showtime at the Dignity Health Sports Park, Carson, California.

On Friday, Donaire weighed in at 117.2 lbs and challenger Gaballo came in at 117 lbs. Earlier this year, Donaire defeated Nordine Oubaali by a fourth round knockout to capture the WBC 118-lb title from him.

Other weigh-in results for the Donaire vs. Gaballo card:

“I could go down to 115 if I wanted to, and still feel really strong,” said Donaire to Boxing with Chris Mannix. “When I fought Naoya, I was actually 116, so I had to drink some water to get up to 117.

“I would love to. I’m putting myself out there in that mix with Chocolatito and Estrada,” said Donaire when asked if he’d like to fight the winner of the Roman ‘Chocolatito’ Gonzalez vs. Juan Francisco Estrada trilogy match.

“That would be great. I’m all for it. With my wife, and she’s okay with it,” said Donaire when asked if he’d told anybody about his interest to fight the winner of the Chocolatito vs. Estrada trilogy match. “I’ve talked about it here and there. 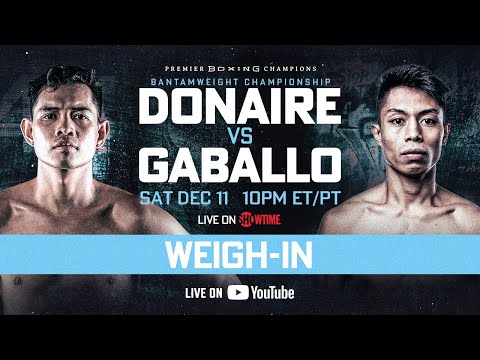 “Richard is going to do his thing and I’m going to advise what I want and if that’s possible, we’ll make that happen.

“That’s the goal that I seek and that’s why the youth in me is flowing. I think the only thing I lacked in that fight was a strategy. I just came in there to fight,” Donaire said about his fight with Inoue in November 2019.

“I went out there to fight without any strategy without any counters,” Donaire continued about his fight with Inoue. “When I did counter, it was all from muscle memory. Now I know exactly what I need to do and do the same thing with strategy.

“I think the biggest thing for me is I’m ready to go and I’m excited,” said Donaire.