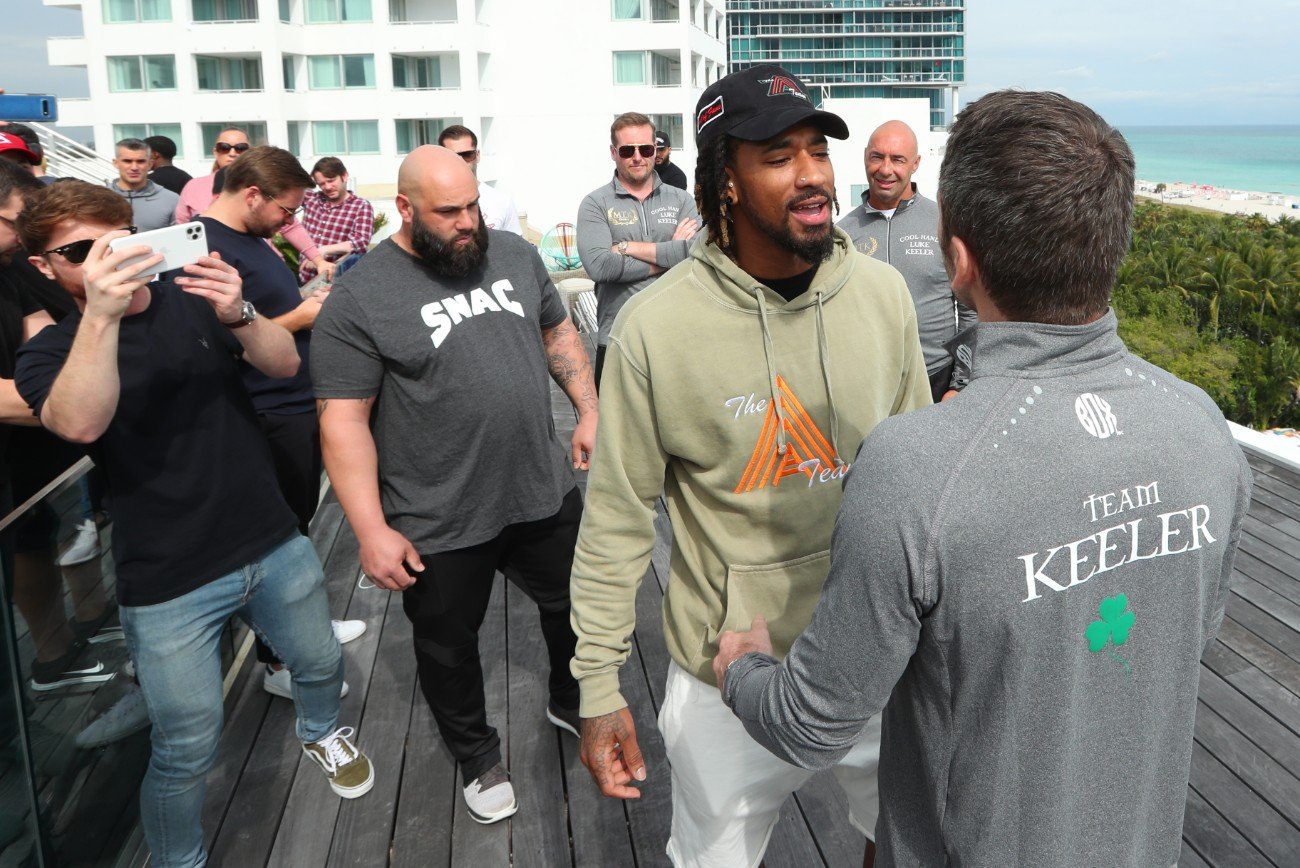 Andrade, 32, wants to entertain the fans to get as much of a boost from a win over Williams as he can so that he can exert pressure on Canelo, Gennadiy Golovkin, and Billy Joe Saunders to fight him.

Given that the 28-year-old Liam Williams isn’t a big name, it makes important that Andrade looks spectacular against him on Saturday.

The only way Andrade can gain anything from this fight is if he completely dominates Williams and knocks him out in a sensational way.

For Andrade to do that, he’s going to have to take risks and put his chin on the line.

Andrade will hold his ground

“It’s not a sensational finish because even when I have that, they still run,” said Andrade to the Pug & Copp Boxing Podcast on what it will take for him to get the big names to fight him. “I’ve got a belt; they still run. I knock them out, they still run.

“I don’t knock them out; they still run. That question should no longer be asked about me being spectacular. Hearns-Hager, that’s the type of talent we have right now, but nobody is willing [to fight].

“Everybody is making millions of dollars now, but they’ll make more millions if they get in the ring to fight each other instead of fighting B & C-level fighters.

“Yeah, they’re going to make money, but when you’re fighting the A-level guys, you’re making that jackpot money. The money that is going to give you twenty to thirty million, it’s possible. It’s realistic because we’ve seen the numbers.

“When you got a guy that is willing to bring a fight, you’re going to get a fight,” said Andrade about Liam Williams talking about wanting to go to war with him.

Williams seems to believe that Andrade will be moving around and trying to keep from getting blasted out on Saturday.

If Andrade, 32, is willing to go toe-to-toe with Williams and fight his own game, it’s going to be fun to see which of them comes out on top.

Williams’ only chance of winning this fight is if Andrade stands and slugs with him, which allows him to land his heavy shots.

The 28-year-old Williams, who goes by the nickname ‘Machine, clearly isn’t the most skilled fighter in the 160-lb division, but he can punch like no tomorrow.

Demetrius: Williams walks into everything

“To me, he’s [Williams] walking into everything.,” said Andrade in describing Liam Williams’ fighting style. “Yeah, come on forward. If they’re moving around, it’s difficult vs. someone that is coming forward trying to fight me.

“I’m going to be the counter puncher or lead puncher regardless. Do you have more power when you have two cars colliding or when they’re going in the same direction?” said Andrade.

Liam Williams’ straight-ahead style of fighting is going to make him vulnerable to Andrade’s shots on Saturday night, but you can’t count him out, though.

With the heavy hands that Williams possesses, he could land something big on Andrade’s chin and take him out.

Andrade hits hard too, which means that Williams will probably need to shoot for the KO right away if he’d to have a chance to win.

We could see Williams suffer a cut or end up too punch drunk to win if he doesn’t catch Demetrius with a big shot in the first six rounds.

Is Andrade the most avoided fighter in boxing?

“Yeah, pretty much,” said Andrade when asked if he’s the most avoided fighter in boxing when reminded that Canelo Alvarez, Gennadiy Golovkin, and Jermall Charlo weren’t interested in fighting him when Eddie Hearn attempted to make the fights. 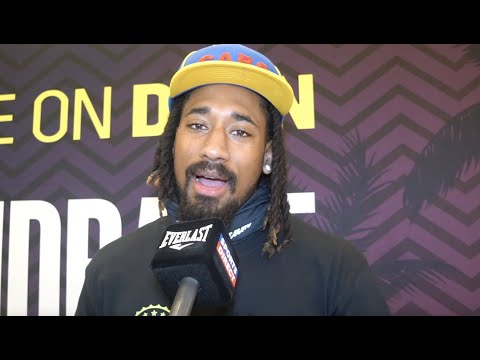 “I have a style that no one can really prepare for, and eventually it [the big fights] should happen,” said Andrade. “But I don’t want to be 40-years-old doing this s***. This is a young man’s sport. I’m not saying I can’t do it until I’m 40.

“It’s about longevity. Am I going to risk it all now so as not to make money in the future,” said Demetrius about him choosing not to put himself in harm’s way to score knockouts. What am I making now?

“I’m not in the Canelo situation where I’m making $35 million and whatever I got to pay everybody with what I make. I’m not in that situation, and nobody really is.

“We got to make the best of what we can, and we got to try and make these bigger fights happen for the fans and for ourselves,” said Demetrius.

Andrade is definitely among the small group of fighters avoided by the top guys around his weight class. It’ll be interesting to see how long it’ll take before the top guys like Canelo, GGG, and Charlo decide to fight him. 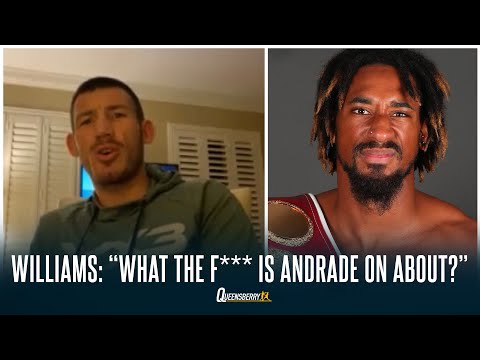 “If something at 175 approaches with the right fighter like he [Canelo] did it, I would do that too.

“I’m not sitting here saying, ‘I’m never going up to 168.’ Nah. If a big fight can be made and it makes sense for both parties, yeah, I’m willing to do it.

“If not, then it doesn’t. Canelo went up there and fought at 175, and then what did he do? He got rid o the [WBO light heavyweight] belt. Why? Because there are dangerous fighters out there.

“Boxing is dangerous. I’m being truthful. This s*** is dangerous. I’ll go up to heavyweight and fight a heavyweight that I think I can hang with. I’m not going to fight Anthony Joshua. I don’t want to die. But from 160, 168 to 175, we can make something happen.

If Andrade wants to force Saunders and Canelo to fight him, he has no other choice but to move up to 168.

They’re not going to come down to 160 to accommodate him, and he’s probably never going to get stars like GGG or Jermall Charlo to fight him.

Canelo had the perfect situation when he moved up to 175 to pick off a worn-out Sergey Kovalev in 2019 to take his WBO light heavyweight belt. As we saw, Canelo quickly vacated the WBO belt right away and showed zero interest in sticking around the weight division to fight the dangerous champions Artur Beterbiev and Dimitry Bivol.

It was a classic cherry-pick move on Canelo’s part to select Kovalev rather than the elite fighters. Yeah, it made Canelo look bad in the hardcore boxing fans’ eyes, but the casuals ate it up.

“Listen, David Benavidez is young, he’s a future star, but for me, I think he needs to fight someone else to make that fight much bigger than if we fought right now,” said Andrade when asked whether he’d be interested in fighting the former two-time WBC 168-lb champion, Benavidez.

“They mentioned him [Benavidez] fighting Jermall Charlo, and then Charlo was like, ‘I’ll fight Demetrius Andrade.’ If that risk is worth the reward with millions of dollars on both eyes, then yeah, let’s go, David Benavidez. I’m not shying away from nobody.

“The Billy Joe Saunders fight was a more realistic situation. We’re both with Matchroom, both on DAZN, and he’s got the WBO [168-lb title].

“I have the WBO, and I can go up and become his mandatory  because we both have the same belt and the same organization. So that’s an easier fight. Me vs. Benavidez, there’s no belt on the line, but a great fight and I’m all for that too,” said Andrade.

It doesn’t sound like a fight between Andrade and David Benavidez will happen soon. Benavidez (24-0, 21 KOs) is arguably being avoided by the likes of Canelo and Saunders in the same way that Andrade is.

For Benavidez to become a big enough name for a fight between him and Andrade to be worth it, a lot will need to change in terms of the other top guys being willing to fight him.