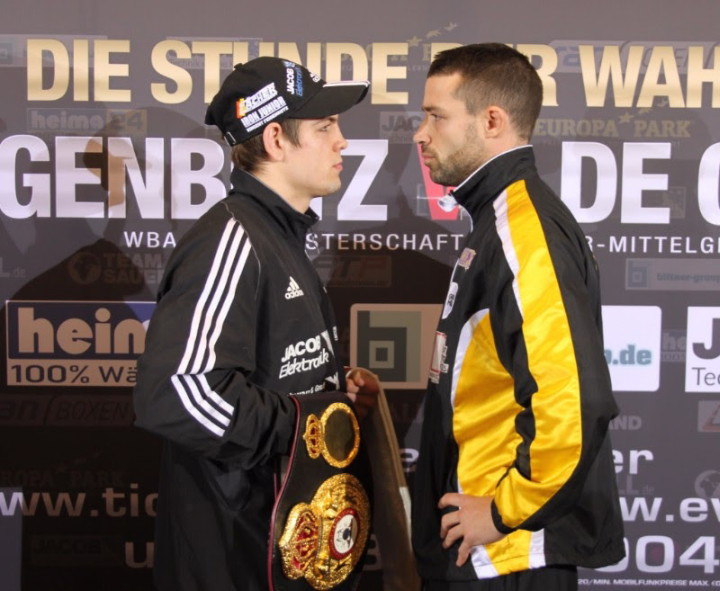 On Saturday night, Vincent Feigenbutz (21-1, 19 KOs) and Giovanni De Carolis (23-6, 11 KOs) renew their rivalry at the Baden-Arena in Offenburg, Germany, with the WBA World Super Middleweight title on the line.

Feigenbutz holds the advantage, having scored a narrow points victory over De Carolis in their fiercely contested first encounter, but despite his previous success, the 20 year-old from Karlsruhe is keen to provide a more conclusive finish to their World title rematch.

Speaking at today’s final pre-fight press conference, he said: ‘’We’ve not changed much in training, but this time I’m fully fit and will be able utilize all my power. I will be curious to see if Giovanni can withstand my punches. Of course, my main objective is to win and be crowned World Champion, but a knockout would be the icing on top!’’

It was Feigenbutz’s coach Hansi Brenner who attempted to provoke his protégé’s Italian opponent, likening their World title showdown to ‘Battle of the Teutoburg Forest’, which took place in 9AD and saw an alliance of Germanic tribes defeat an invading Roman army.

The provocation was lost on De Carolis, who responded: ‘’History may repeat itself – but not in the way Vincent and his team imagine. My form is outstanding, as Vincent will find out, and I’m ready for whatever he has to offer. I not only have Rome behind me, but the whole of Italy, and I will repay their support, by bringing the WBA World title home.’’

With victory at the Baden-Arena, Feigenbutz can become Germany’s youngest ever World Champion, a feat his manager Rainer Gottwald is confident he can achieve.

‘’The first fight with De Carolis did not go exactly as planned, but this time Vincent will show his true potential. I have no doubt; he will make history on Saturday night! Not only will he be the youngest German World Champion, but also the youngest Super Middleweight Champion of all time.’’

Promoter Kalle Sauerland is expecting another action-packed clash between the battling super middleweights and is eager to see how a fully fit Feigenbutz will fare against his Italian foe.

‘’Vincent and Giovanni’s first fight was one of the most exciting contests we’ve seen on German soil for a long time,’’ said Sauerland. ‘’In the US, many experts were describing it as the European fight of the year. If the rematch comes close to this, we are in for a real treat.

‘’Despite not being fully fit, Vincent showed tremendous fighting spirit in their first fight, but now, we will see what a healthy ‘Iron Jr’ can really do!’’