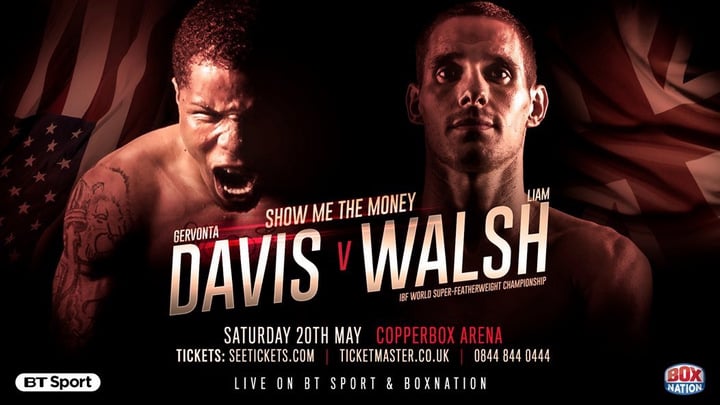 Slick southpaw Walsh outclassed Andrey Klimov back in October to confirm his mandatory status as the number one contender and has not put a foot wrong in his career to date, winning the British, Commonwealth and WBO European belts along his 21-0 journey.

Ahead of their eagerly-anticipated World Title showdown later this month, Davis and Walsh were joined by promoters Floyd Mayweather and Frank Warren for an unmissable face to face interview.

Liam Walsh hopes hammering WBO Super-Featherweight Champion Gervonta Davis later this month will be a step towards a ‘Battle of Britain’ against Terry Flanagan.

Unbeaten Walsh challenges Davis, who is being touted to take his promoter Floyd Mayweather Jr’s mantle as boxing’s number one star, at London’s Copper Box Arena on May 20.

Walsh is oozing confidence and believes beating the American would help lure Mancunian Flanagan into making a defence of his WBO Lightweight Championship against him.

Cromer’s Walsh, 30, said: “A great fight would be against Terry Flanagan.

“I have got so much respect for him and it is between him and Linares who is the best in the world.

“It is a huge fight for Britain, but Terry is most probably not interested in fighting me because I haven’t earned his stripes.

“I think he is tight on weight and looking at moving up soon, but without sounding big headed if it was at ten stone I’d still do it.

“People will laugh but I think I can hold my own at Super-Lightweight. Maybe someone needs to fill me in and bring me down to earth.

“I have just got self belief and confidence that I can hold my own up to ten stone. People will think I’m an idiot, but until I am proved wrong I will have that mentality.”

Undefeated Davis, 22, has knocked out 16 of his 17 opponents, but Walsh dismissed his power adding: “I have watched his fights on YouTube. He is hitting people with four or five clean punches and they are not going anywhere.

“For me, he has got the Chris Eubank Jr effect. He throws all these really good looking shots then he nails the guy flush across the chin and the guy looks at him.

“You think, ’That should have knocked him out’, because it looks brilliant but he isn’t knocking people out cold.”