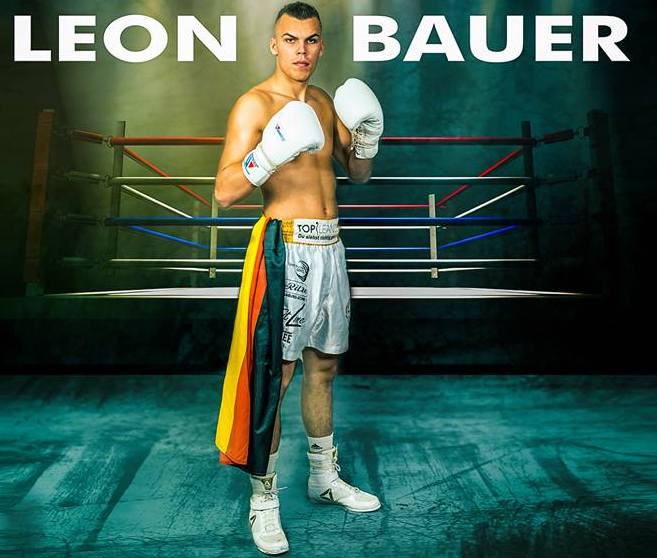 Leon Bauer is a rising star fighting on the undercard of Callum Smith vs. Juergen Brahmer in the WBSS semi-final this Saturday. Bauer is an exciting prospect from Germany who fights in the super middleweight division. He was the youngest ever German boxer to fight in the boxing capital of the world; Las Vegas. He sure is on the rise, and I can’t wait to find out more about him.

WV: How did you get involved in boxing? What do you enjoy about it?

As far as I can look back my Dad take took to the boxing gym and that was the beginning of it. I started with many different types of sports, for example- kickboxing, Thai boxing, wrestling, however I finally came to the realisation boxing feels more special to me.

Boxing has helped me a lot in life, especially also in secondary school. It always taught me to respect something, that hard work pays off and helped me to become the young man I am today.

WV: Are you currently in training camp and how is this going?

Yeah, I’m in training camp at home in our own gym for my upcoming fight next Saturday on the undercard of the WBSS semi-final Callum Smith against Juergen Brähmer. The camp is nearly over, and I feel very ready to step in the ring this Saturday.

WV: When is your next fight? And who will you be fighting?

Like I said on 24th February against the Italian Marco Miano, who is thirty years old.

WV: You are only nineteen years old. How come you turned professional at such a young age?

When I start fighting in the amateurs every time I stepped up into the ring I had a big political disadvantage because my dad was my trainer, I was always different than the other fighters and we never came from the favourite boxing club. That’s why it was nearly impossible to get fights and experience in the amateurs, but the decision to go to the pros that early came when I was fifteen years old and I came back from as a winner from the German nationals.

Before I left my family, I would stop boxing and at this time the only chance to fight was to change to the pros. I never got a real chance at the amateurs, and if that doesn’t happen I will be in preparation for the 2020 Olympics in Tokyo.

WV: Who are your favourite boxers of all time, and why?

My all-time favourite fighter and idol is Roy Jones Jr. Since I can remember I was watching his fights, his special movement his fast hands and his domination over the sport for years. I understood Roy’s morals very well as first and fore mostly he was the king inside the sport and outside of the sport he was a businessman.

Who is your promoter and what could you tell us about him/her?

My promoter is Sauerland Event. What can I tell you about my promoter, I don’t have that much contact with him.

WV: What do you want to achieve in the sport of boxing? Where do you see yourself in five years’ time? Do you want to break America?

I want to go on the top and stay there, so many very good former top amateurs, Olympians and top prospects out there burn too soon. It was too early to go to the top and get knocked out, however I have had some very tough fights. We move slowly and at the end of August I will be twenty years old. So, we have so much time to build up our system to get stronger and stronger. I see myself in five years ready to move on and fighting the best in my division out there. Of course, my grandfather came from America and England, and America always has been toughest and the best place for boxing

WV: What are your greatest achievements so far in boxing?

I am already in the history of German boxing and the first one who won in America in the MGM Grand Garden Arena and one of the youngest IBF youth World Champions out there.

WV: Who do you train with and who else is in the stable of fighters which you are in?

That’s a big problem in Germany there are not many fighters out there I can train and spar with. In that way in the past we have had many problems. For preparations for fights we didn’t have the calibre of sparring partners for me. So that’s also a big point to travel around the world and train and learn from the best fighters out there and to get the best experience. This is what we are looking for.

We are a boxing family; my father is the trainer and we are his kids. My brother Allen fourteen and my sister Keana twelve started boxing since they can walk. My mother helps by advertising, promotion and managing all we need. So, we are a boxing family from Germany and I would love to fight in England especially London one day.