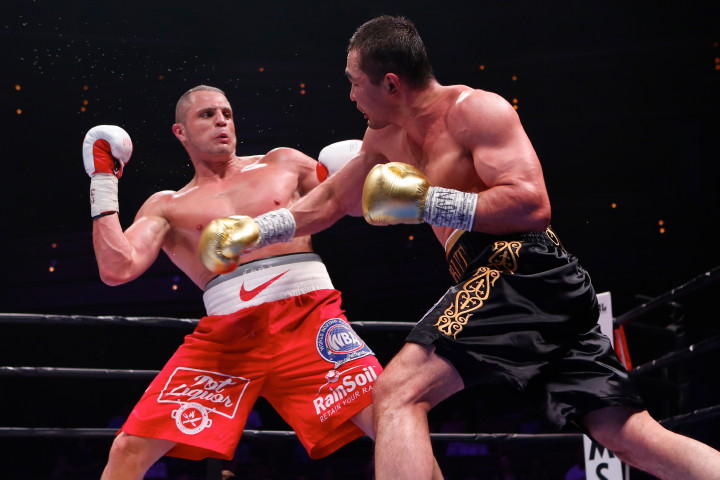 Former WBC and interim WBA cruiserweight title challenger B J Flores feels he should have moved up to heavyweight a long time ago; maybe even five or six years ago. The 38 year old who has picked up plenty of experience, having encountered a number of styles, says he is a fully-fledged heavyweight now – and that he is one who is on the hunt for a big, meaningful fight.

Flores, 34-3-1(21) is best known to UK fans for his stoppage loss to Tony Bellew in October of 2016, but as Flores explains, there was more to that fight than may have met the eye:

Q: You are now a heavyweight. You’re cruiserweight days have ended?

B.J Flores: “I was actually a heavyweight before the [Beibuit] Shumenov fight (in July of 2015, a 12-round UD loss for Flores in a shot at the interim WBA cruiser belt). I had a fight at heavyweight right before that fight. Now, yes, I’m fully moved up. But the thing was, they called with the Tony Bellew fight, and I couldn’t say no. So I made that my final attempt at making 200 pounds. But it was just a crazy time, a crazy series of events ahead of that fight.

“I’m not making excuses, in fact I never made a deal about this at all. But with BBB of C rules, or whatever it was, I had to make 205.2 pounds on the Wednesday before the [Bellew] fight, which I did, but it was so hard. Then, I had a knock on my door on the Thursday, with them telling me I had to make 205 again. I said how this was crazy, that the weigh-in wasn’t until Friday! But I made 205, again – just. Then I somehow made 200 pounds for the official weigh-in. It really was crazy. Then, in the fight, he [Bellew] clearly hit me low. That shot was not even anywhere close to my belt. It was clear foul and I never recovered from that. But that’s over now and I’m aiming to make amends, in a big way, as a heavyweight.”

Q: Who would you like to fight next, at heavyweight?

B.J.F: “Right now there are a lot of feelers going out. We are looking at a few different options. It’s a case of making the best possible deal. I’d love to fight Daniel Dubious. I’d love another chance to fight in the UK. Dillian Whyte, Lucas Browne, and the undefeated guy from Russia, Sergey Kuzmin – I can’t state enough how I’d like to fight that guy. I’d go to Russia, of course. I’m always in training and I could fight again as soon as February. I want a big fight, a meaningful fight. I’m ranked WBA number-9 and I have a lot to offer. Dubois, I think he’s a good fighter, with a lot of potential and a lot of talent. I’d love to fight him if he wants a test.

Q: Would you fight him in a six-rounder – maybe on the under-card of the May 5 return between Haye and Bellew; if that could be arranged?

B.J.F: “It would have to be a ten-rounder. I wouldn’t feel comfortable fighting him over six or even eight rounds. I know he’s promoted by Frank Warren, but I would love it if I could fight Dubois on the David Haye-Tony Bellew rematch card, of course!”

Q: You are good friends with David – can he come back?

B.J.F: “Of course. He’s had some bad injuries, but people should know why. It’s because he’s getting older of course, but it’s also because David puts it all in in training. He really does work hard in training and he pushes his body to the limit. But he knows how to handle it more now. Myself, I feel I have so much more to offer as a heavyweight, and David can also come back in style himself. I’m really looking forward to a big 2018.”